Empirical evidence shows that being near IRRI has an advantage. Seventy percent of all varieties released in the Philippines were strongly linked with IRRI between 1985 and 2009. IRRI has also contributed to improving rice yield in the country. In fact, Filipino rice farmers have higher average yield than their counterparts in some top rice-exporting countries. 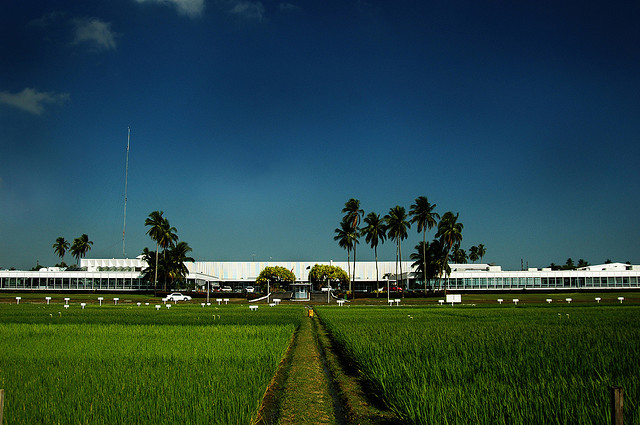 According to social psychologist Theodore Newcomb’s proximity principle, individuals tend to form interpersonal relations with those who are close by. Although the proximity principle was initially applied for attraction and acquaintance, could it answer the question, “Do Filipino farmers benefit much from the presence of IRRI in the country?”

The answer is “yes,” according to an Australian Centre for International Agricultural Research (ACIAR) impact study. The study showed that, between 1985 and 2009, improved varieties from IRRI increased the profit of Filipino farmers by US$52 per hectare per year. And, the IRRI link to rice varieties developed in the country was strong throughout the period—averaging 70% of all varieties released. IRRI has contributed to improving rice yield in the country by 11% or $1.017 billion in 2009—an annual average of $625 million. In fact, Filipino rice farmers have higher average yield than their counterparts in some top rice-exporting countries. In 2014, the average yield of the country was 3.96 tons per hectare, higher than that of Thailand (2.85 tons per hectare), Myanmar (2.69 tons per hectare), and Cambodia (2.51 tons per hectare).

The fault is in the geography 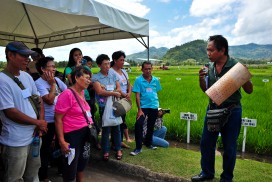 Many of IRRI’s new technologies are tested in the Philippines and first made available to Filipino farmers ahead of the rest of the world. (Photo: IRRI)

The country is archipelagic— composed of more than 7,100 islands,” said Ludovico Jarina, deputy administrator of the Phillippine National Food Authority, as he shared similar arguments found in the book during his presentation at the Global Rice Market and Trade Summit in Thailand held on 28-29 October 2014. “The country is at a disadvantage compared with Thailand and India, which have flat lands that seem to go on and on.”

According to David Dawe, FAO senior economist and one of the authors of the book, Why does the Philippines import rice?, “rice-importing countries such as the Philippines, Indonesia, and Malaysia are islands or peninsulas.” On the other hand, a common feature of rice-exporting countries such as Thailand, Vietnam, and Myanmar is that they are all located on the mainland of Southeast Asia.

“Geography is the reason why some countries have more land suitable to growing rice,” said Dr. Dawe. “The countries on the mainland have dominant river deltas that provide ample water and flat lands. These flat lands are important for easier water control. And, it also helps to have access to river systems, making the cost of transportation low, which helps in facilitating exports.” “The country is frequented by an average of 22 typhoons in a year,” according to Mr. Jarina. “Within 3 years (2011-13), a total of about 1.6 million hectares of area planted to rice were affected by various calamities, with an an average loss of 597,375 tons per year.” He also cited the high population of around 100 million rice consumers as one of the challenges in the country’s domestic supply. A gap exists between the annual increase in rice consumption, which is 4.59%, and the increase in local rice production, which is 3.68%. For Dr. Dawe, the supply side also has something to do with the Philippines being a rice importer. “The proportion of land devoted to rice tells the story,” he said. “Thailand devotes 56% of its crop area to growing rice, compared with just 32% in the Philippines.”

“The geographical pattern of exporters and importers has been consistent over time,” said Dr. Dawe. The Philippines, just like Indonesia and Malaysia, has been importing rice for more than a hundred years, and the exporting countries have been similarly consistent for most of that time. Although the Philippines and Indonesia became self-sufficient in the 1980s, and even exported small amounts of rice, this happened because of the Green Revolution package of high-yielding varieties, irrigation, and fertilizer, which was adopted earlier by these two countries than by the exporting countries. The Green Revolution probably would not have taken place earlier in the Philippines if IRRI had been located in Thailand or Vietnam.

The quest for home-grown rice

Understandably, the Philippine government is determined to attain rice self-sufficiency. “The rice traded in the world market is relatively thin, averaging 7–8% of the world’s production,” Mr. Jarina explained. “Rice can be bought from only a few sources—81% of world rice exports are controlled by five countries: Thailand, Vietnam, India, Pakistan, and the United States.”

Rice demand is growing sharply with nontraditional rice-eating countries, which are contributing more to the global demand, he added. Lastly, climate change causes low global production. For the Philippine government, the way to get there is through the country’s Food Staples Sufficiency Program (FSSP), anchored on improving farm productivity and making Filipino farmers globally competitive. “The Institute supports such a move,” said Bruce Tolentino, IRRI deputy director general for communication and partnerships. “IRRI is presently working with PhilRice, the University of the Philippines Los Baños , and the regional offices of the Department of Agriculture to bridge the gap between local rice production and consumption.”

This is being carried out under the project Accelerating the Development and Adoption of Next-Generation Rice Varieties for the Major Ecosystems in the Philippines, or simply called “the Next-Gen project.” “We are not just helping farmers increase yield; we are also helping the country’s rice industry cope with climate change,” Dr. Tolentino added. IRRI has worked with the Philippine Department of Agriculture to develop and test climate-smart rice varieties. Examples of these are Submarino, Katihan, and Salinas, varieties that can withstand flood, drought, and salinity, respectively. 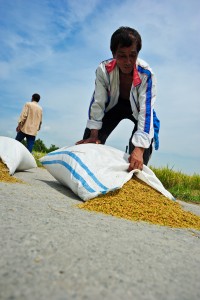 “ACIAR, in its evaluation of IRRI’s impact in the Philippines, did not include other areas of the Institute’s activities; if they had, the impact and value of benefits would have been much more,” Dr. Zeigler said. “IRRI helps Filipino farmers improve their management practices.

“For example, we have alternate wetting and drying technology that can reduce the water need of farmers by up to 30%. The Nutrient Manager for Rice Mobile helps Filipino rice farmers identify how much fertilizer to use, which type, and when to apply it. We have been working with the Philippines since our establishment in 1960,” continued Dr. Zeigler. “Many of our new technologies are tested here first and made available to farmers here ahead of the rest of the world. And, because of our location, Filipino scientists can select from our potential new rice varieties much more easily and cheaply than our other Asian partners.”

IRRI also contributes to the capacity building of the country. Through 2014, the Institute had a total of 3,398 Filipino trainees and scholars. Within Asia, the Philippine universities enjoyed a sizable share, ranging from 38% to 96% of IRRI scholars’ enrollment.

Truly, the proximity principle is true when it comes to the impact of IRRI in the Philippines.

Ms. Reyes is the managing editor of  Rice Today.