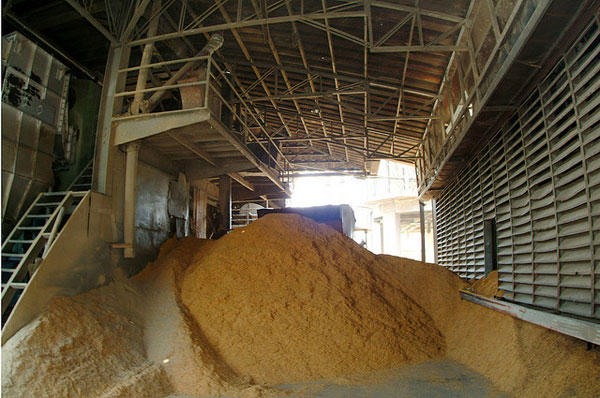 Once an unwanted waste material, rice husk is now used as fuel for generating electricity for households and industries as well as a replacement for wood in many products. (Photo: IRRI)

The rice husk (or hull) is the outermost layer of the paddy grain that is separated from the rice grains during the milling process. Around 20% of paddy weight is husk and rice production in Asia produces about 770 million tons of husk annually.

Rice husk was largely considered a waste product that was often burned or dumped on landfills, according to Martin Gummert, postharvest expert at the International Rice Research Institute.

“In Vietnam, it used to be a waste some years ago and was dumped in the rivers, causing a big problem, but now it has a value,” Mr. Gummert said. “In fact, in most countries, rice husk is not waste anymore.”

Some enterprising companies are turning it into various products not only for the eco-conscious market place but also for the industrial sector.

In India, a nongovernment organization uses rice husk to supply rural villages with cheap and affordable electricity, while a company in Spain saves the environment one wood-free chopstick at a time.

Recycled light
India, one of the biggest rice producers in the world, not surprisingly, also produces vast amounts of rice husk. Bihar alone is estimated to produce 1.8 billion kilograms of rice husk every year. For Gyanesh Pandey, an engineer and native of the state, this was an inexpensive energy source to light up villages outside India’s industrial power grid.

Mr. Pandey is the co-founder and CEO of Husk Power Systems (HPS), a rural empowerment enterprise that designs, installs, and operates mini power plants using a biomass gasification technology he co-developed. The process burns rice husk with a controlled amount of oxygen to produce gas that powers an internal combustion engine that produces electricity. The mini power plants, operated by local villagers trained by HPS, can generate from 25 kW to 100 kW of electricity. Rice husk power plants, depending on their of up to 4,000 people.

The electricity is distributed directly to subscribing households, farms, and small businesses, within a radius of 1.5 kilometers, on a payfor- use basis. Consumers prepay a fixed monthly fee, ranging from US$2 to $3, to light two fluorescent lamps and one mobile charging station, according to HPS. This is at least 30% cheaper than the cost of kerosene and diesel and enables savings of up to $50 for each household every year.

Since 2008, HPS has installed more than 80 plants in Bihar—enough to provide over 200,000 people across 300 villages and hamlets with electricity. By 2014, HPS plans to take its decentralized electricity generation and distribution model to more than 6,500 rural areas. HPS estimates that more than 10 million people will benefit from the power of recycled rice husk.

Back on the table
Another company is bringing rice husk back to the dining table, not as food but as the main material for producing disposable chopsticks.

The use of wooden disposable chopsticks—which are cheap, convenient, and hygienic—has a tremendous effect on the environment. In China alone, an estimated 45 billion pairs are used and thrown away every year, the equivalent of almost 4 million fully grown trees, according to a report by China Daily. The environmental impact of wooden disposable chopsticks is so serious that the Chinese government has imposed a “chopstick tax” to curb production and use.

Japan is another major consumer of disposable chopsticks. Eliminating disposable chopsticks in the country could prove more difficult because of traditional beliefs that “chopsticks lose their original divine power after a single use.” To preserve its forests, Japan imports disposable chopsticks from China, Vietnam, Indonesia, Chile, and Russia, resulting in deforestation in those countries. Japan, however, still has to deal with the problem of used chopsticks—an estimated 25 billion pairs every year. This is where rice husk comes in.

Algan Technology, a company that specializes in reusing waste products and by-products, has developed a new material that contains 90% rice husk and only 10% resin. This nontoxic material, called SOLIT RICEIT, can be used for manufacturing reusable and disposable chopsticks without cutting down a single tree.

“SOLIT RICEIT chopsticks have the feel and appearance of regular chopsticks so they can be used over and over again as eating implements,” said Joaquín Rodrigo García, co-founder and project manager of Algan Technology. SOLIT RICEIT chopsticks are so eco-friendly they can also be recycled into new products such as boxes, boards, pallets, and others traditionally made from wood without using any additives or water.