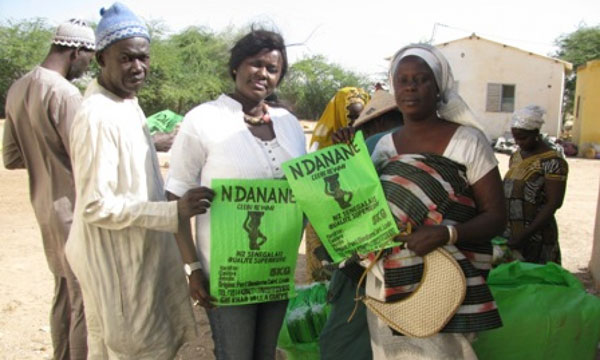 Rural women are the “seed custodians” in Bangladesh. They play the primary, but typically unrecognized, role of preserving rice seed after harvest and storing it until it is used to plant the next season’s crop.

If the seed is in poor health, the crop suffers and less rice is harvested, which can leave families hungry. But, if the seed is in optimal condition, the crop can grow well and produce more rice—meaning more food and more money. Having healthy rice seeds could take families and communities a step away from poverty.

However, reaching Bangladeshi rural women, who may be socially isolated or have limited access to basic learning resources, makes sharing of practices for improving the quality of their seed difficult.

The Ashroy Foundation has taken a female-friendly approach that has proven effective—and it doesn’t involve only women. Improved but low-cost techniques that build on local knowledge to upgrade harvesting and seed management processes such as drying and cleaning are shared with farmers.

“We organized a series of meetings in the courtyard (within the village) and personal consultations with the women’s husbands, religious leaders, and other influential people in the local community,” Momotaz Khatun, executive director of the Ashroy Foundation, explains.

“During these sessions, we emphasized that, if women practice the improved methods of rice seed preservation, this will lead to increased yields, increased surplus, and more income for their families.” The work extends across Khulna, Satkhira, Narail, and Bagerhat districts of Bangladesh and has seen 23,000 farmer participants, including 17,250 women.

According to Ms. Khatun, 83% of the participants adopt the improved practices they learn, and the added benefits include giving the women social mobility and improving family cooperation, especially from their husbands.

This activity is part of the Cereal Systems Initiative for South Asia (CSISA) in Bangladesh. The International Rice Research Institute (IRRI) provided technical guidance and demonstrated the improved technologies.

From one woman’s hand to a village’s choice

Upon seeing for herself the promise of Swarna-Sub1, Asha Singh, a mother of two, decided to encourage her village in Sitamarhi, Bihar, India, to try the new rice variety for themselves.

She mobilized 200 farmers to demonstrate how well the flood-tolerant variety performed. She organized women’s meetings to educate them about climate change and explained how Swarna- Sub1 could help reduce their crop losses due to flooding.

Such is the influence of a woman who has been convinced that a technology is good for her and her community.

Yet, Asha is one among millions of rural women who have been left out by agricultural research and development programs, despite the fact that women are the backbone of India’s agricultural workforce. The roles they play are vital in the day-today maintenance of their rice farms.

The Stress-Tolerant Rice for Africa and South Asia (STRASA) project has consistently paid special attention to the roles of women in its programs. The STRASA project involves them in participatory varietal selection (PVS). In PVS activities, women like Asha help choose, evaluate, and disseminate new rice varieties that suit their needs.

“These women contribute in decision-making on varietal selection by giving feedback on the cooking and eating quality of rice,” she said. “In this way, women make an important contribution in identifying suitable new varieties.”

Appearances matter—at least for African women who were part of a project that sought to understand how marketing practices influence consumer preference between locally produced and imported rice.

In Africa, women undertake much of the work in traditional rainfed, mangrove, and upland rice production systems. However, they often have limited access to land for rice growing, particularly in irrigated environments. Therefore, they typically specialize in postharvest activities, such as processing, quality control, and marketing. But, in order to compete against massive rice imports, they need to effectively market local rice to consumers.

AfricaRice provided training programs to women on business, entrepreneurship and marketing, provided mechanized processing equipment, and developed a home brand for their company.

Packaging is a significant part of how consumers in Senegal decide which rice to buy. Furthermore, experimental auctions have shown that consumers are willing to pay price premiums of 17% for their preferred brand. This demonstrates the need for a greater focus on marketing research as a way to improve the competitiveness of local rice.

“Marketing is an important tool in adding value to local rice in Senegal,” explained Matty Demont, IRRI senior economist. “And, it should be used effectively as organizations work toward increasing demand and creating a successful rice sector.”

“Investing in a local brand and creating a distinguishable commercial identity for the women’s association Khar Yalla Gueye in Pont Gendarme may be one step toward increased competitiveness of the domestic rice sector in Senegal with concomitant impacts on women’s livelihoods,” he concluded.

The study was supported by Syngenta Foundation and the U.S. Fulbright Program.