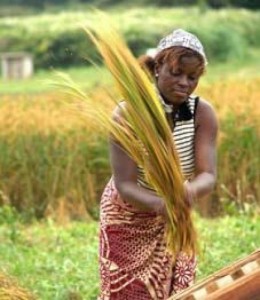 The 26th session of the Council of Ministers of the Africa Rice Center (WARDA), held in Abuja, Nigeria, 27-28 September 2007, signaled a historic change for rice research in sub-Saharan Africa.

The expansion of the geographic mandate of WARDA, which is primarily based in West Africa, was formally approved and four East and Central African countries were admitted as WARDA members.

“This is the first time since 1987 that new members have joined WARDA,” stated WARDA Director General Papa Abdoulaye Seck. “But what is more important is that the new member states are from East and Central Africa—regions that, unlike West Africa, were not traditionally known for rice cultivation.”

“With the success of WARDA’s technologies, particularly the New Rice for Africa (NERICA®), Central and East African countries are seeing for themselves the benefits of investing in rice research,” Dr. Seck said.

In his opening address, His Excellency Umaru Musa Yar’Adua, president of the Federal Republic of Nigeria (represented by the vicepresident, Dr. Jonathan Goodluck, who delivered the message) mentioned that, aside from NERICA, another major contribution from WARDA to Nigeria was in the area of rice policy research.

The Council of Ministers thanked Dr. Seck for his strong advocacy for rice research and development, which has led to tangible improvements in contributions from member states—including Nigeria, which has fulfilled its financial obligations to WARDA to date.

“The contribution received from member states in 2007 is equivalent to that of the last 10 years,” the Council affirmed.

The Council strongly backed a new pan-African Rice Initiative that will be launched in 2008 by Benin President Yayi Boni with WARDA, as part of advocacy efforts to support Africa’s rice sector.

Dr. Seck’s vision and strategy for a more competitive, diversified, and sustainable Africa Rice Center were fully endorsed by the Council, particularly the post-M.Sc. internship program for young educated Africans designed to create the next generation of rice researchers in sub-Saharan Africa.

The Council urged WARDA to strengthen links with subregional and regional bodies and reiterated its commitment that WARDA, while remaining one of the 15 international centers supported by the Consultative Group on International Agricultural Research (CGIAR), be recognized as a Center of Excellence of the African Union.

As the shortage of seed of improved varieties continues to be a major constraint to rice production in sub-Saharan Africa, the Council encouraged WARDA’s involvement, in association with national programs, in seed production and urged it to help in the development and harmonization of seed legislation at the regional level.

One of the highlights of this session was the presence of invitees from the Network of Farmers’ and Agricultural Producers’ Organizations of West Africa. The Council resolved to invite farmers’ associations as observers to the WARDA National Experts Committee meetings on a regular basis.

The 26th session was held under the chairmanship of Abba Sayyadi Ruma, Nigeria’s minister of agriculture and water resources. Before concluding its historic session, the Council approved Togo’s assumption of the Council chairmanship for the next 2 years.