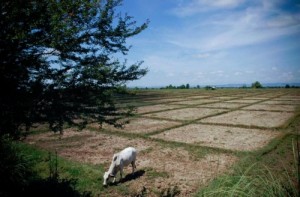 A lack of rain in the northern Philippines in July and August 2007 meant that many farmers’ rice fields—such as these in Isabela Province—remained empty. (Photo: Ariel Javellana)

This was the scene in late August 2007 throughout towns on the Philippine island of Luzon in the Central Region, Cagayan Valley, and the Ilocos Region (see brown-shaded area of map). Drought hit these areas in July, forcing most rice farmers to plant maize, vegetables, and other dry-season crops instead of rice.

Venturing north from its Los Baños headquarters, Rice Today  expected to see parched land studded with dry rice plants, but there were none. Our first reaction was relief for the farmers mixed with fears that our attempt to document the effects of drought would be futile. Fortunately—or unfortunately—after several interviews with farmers and farm workers, we discovered that the absence of dry rice fields was not because the reports of drought had been exaggerated, but because many farmers had simply ceased their planting operations altogether due to the absence of rain.

“Most of the farmers here did not plant rice anymore when we knew there was a drought,” explains Marlon Ortilla, 34, a rice farmer in Sinait, Ilocos Sur. “I planted rice seeds on 24 June but was able to transplant the seedlings only on 25 August due to drought. The 2-month delay caused yellowing of the rice seedlings, which is no good.”

Like many other rice farmers in the area, Marlon Cabato, 42, from Amulog, Cagayan, planted maize instead of rice. “We should have started planting rice in June,” he laments, “but because there has been no rain, we planted maize just now [late August]. My rice seedlings are short and small because of the lack of water.”