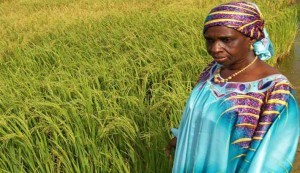 I was born in Saint Louis, which is located in the northwest of Senegal, near the mouth of the Senegal River. This region is endowed with enormous natural resources and is the country’s irrigated rice belt.

Later, I moved to the neighboring town of Richard Toll, which also has strong links to rice. The town is named after Jean Michel Claude Richard (1787-1868), a noted French botanist, who established an experimental garden, where he conducted for the first time irrigated rice trials in Senegal. “Toll” in the local language Wolof means garden.

In 1949, the French initiated a rice-growing scheme in Richard Toll on 6,000 hectares for exporting to Europe. But, in the 1970s, the crop lost its predominance in that area because of a lack of government support. Richard Toll is now more known for its sugar industry. To me, this has been a big loss for rice development.

From accounting to seed production

I started work as an accountant in the French Institute for Tropical Agricultural Research (IRAT), which later became known as CIRAD, the French Agricultural Research Centre for International Development. My boss was a dedicated rice geneticist who encouraged me to learn everything about rice cultivation. I soon became a rice enthusiast and first started growing the crop on a 1-hectare area.

I was told that it would be difficult for a woman to become a successful rice farmer, but I persisted. I took up rice seed production in 1973 and became president of the National Union of Professional Seed Producers in Senegal (UNIS) in 1994, and served as president until 2000. During that period, I was contacted by the Senegalese National Agricultural Research Institute (ISRA) to produce foundation seeds of all the rice varieties released in Senegal. UNIS took over that job in 2000.

In 1998, we produced 105 tons of seed of improved rice varieties developed by Africa Rice Center (AfricaRice) and its partners for Mauritania. Similarly, we produced more than 140 tons of seed for Guinea Bissau, which helped that country to revive its rice industry after the war.

An activist for rural women

In Senegal, like in other parts of Africa, rural women traditionally do not have access to agricultural land. Hence, they are obliged to rent land. But, once they develop it for farming and it becomes profitable, the owner takes it away from them. This is the general pattern. To empower these women, we established a federation in 1997.

This federation, known by its French acronym FEPRODES, has more than 38,000 members involved in agriculture in Saint Louis. FEPRODES provides training in improved farming and postharvest techniques, computer science, gender mainstreaming, leadership, and management of small enterprises for its members.

We soon realized that, without microcredit, it would be difficult for our members to reach their goal. So, we created a microcredit facility attached to FEPRODES to serve primarily our members. I’m proud to say that, in 2012, out of 234 microcredit facilities evaluated for the quality of their service, ours was ranked sixth in the country.

As most rural women are very poor, we kept the minimum amount for opening an account in FEPRODES to just 50 F CFA (US$0.10). We encouraged our members to form small associations for obtaining credit from us. In most cases, the women pay back their loans on time. Unfortunately, this is not the case with the men. Right now, we have a huge crisis of unpaid loans.

Association with research and development partners

I was an active member of the former rice network for West and Central Africa (ROCARIZ) and the African Rice Initiative convened by AfricaRice. We maintained close links with ISRA and AfricaRice for training and seed production. We were also closely involved in AfricaRice’s participatory varietal selection (PVS) activities, which bring farmers in direct contact with new rice varieties under development.

In 2009, based on the recommendations of AfricaRice and demand from farmers, the government of Senegal passed a decree that varieties selected by farmers in PVS activities can henceforth be released in the country without going through the formal lengthy evaluation process of the national variety release committee. Sixteen new rice varieties selected by farmers were immediately released for large-scale cultivation.

We are also greatly benefiting from the recent release of three aromatic rice varieties developed by AfricaRice. There is a big demand for quality rice, particularly aromatic rice, in Senegal, for which clients are ready to pay a premium price.

With support from USAID, we are focusing on the production, branding, and marketing of quality rice and our rice is now being sold under the Le Richard brand. The World Food Program recently bought 100 tons of rice from us as part of its new policy of purchasing local rice for distribution.

Message to the government

Like other African countries, Senegal had marginalized agriculture for a long time. That is why we are relying heavily on rice imports to meet our demand despite having good potential for production. We strongly support the current government’s strategy to boost rice production and become self-sufficient by 2017.