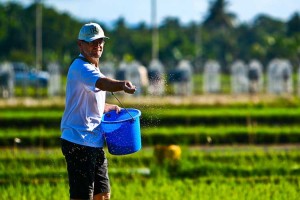 Achim Dobermann’s term as head of research at the International Rice Research Institute (IRRI) saw a period of constructive upheavals in the way the Institute conducted science and reshaped rice research into a truly global alliance.

“The job of deputy director general for research at IRRI is probably the most interesting job in the whole CGIAR,” says Dr. Dobermann, a soil scientist who left IRRI in 2000 and came back in 2007 to head the program on sustaining productivity in intensive rice-based systems and became the head of research in 2008. Under his leadership, IRRI developed a whole new strategy that stabilized funding and gave researchers space to be creative. A lesser visionary could not have pulled this off.

IRRI was about to mark its 50th year and seemed ready for a new direction when Dr. Dobermann took the reins of its research. “I came at the right time, I think, as IRRI had embarked on a new strategic plan, which presented many opportunities,” he says.

For instance, he perceived a growing international interest in hybrid rice, but IRRI was hampered in obtaining public funding for its hybrid rice breeding program.

“The only way out of the bind was a whole new model—a public-/ private-sector partnership,” Dr. Dobermann recounts.

So, the Hybrid Rice Development Consortium (HRDC) was formed, comprising 15 national research centers and 19 private company members. Through it, germplasm exchange between IRRI and its partners grew more than tenfold from five years ago and now the HRDC has 68 members nearly equally represented by the public and private sectors. The new partnership model also resulted in a more stable funding base and opened up a whole range of partnership options for IRRI, especially with private companies.

In the last five years, many new programs were developed, expanding in both scope and intensity IRRI had not seen before. The Institute started projects in new regions, such as East and southern Africa. It succeeded in getting support from new donors, including the Bill & Melinda Gates Foundation, tripling the Institute’s funding during the period.

Forming alongside these developments was the Global Rice Science Partnership (GRiSP)—the “mother ship” that unified all these efforts.

One program to run them all

As head of research, Dr. Dobermann cited as his biggest challenge “the constant need and difficulty” of getting a long-term research strategy funded from many projects and sources.

About 70% of IRRI’s research is funded by some 140 grants from more than 60 donors, each with its own set of work plans, partners, and reports. An overarching, longer-term research agenda that goes beyond the goals and timelines of individual projects is what he believed would help IRRI get all of its diverse projects into a single groove.

Things started taking shape in 2008, during the annual general assembly of CGIAR in Mozambique, when the 15-center group was considering major changes in the way it worked. Dr. Dobermann hoped that any reforms would somehow fix what he called “too much short-term thinking and too much short-term funding.”

“People were talking about ‘mega-programs,’ but seemed unclear on what those might look like,” he says of the 2008 meeting. “We felt that the best way forward was to create an example.”

On the way back from Mozambique, he and IRRI Director General Robert Zeigler visualized what an integrated global program on rice that combined the missions of IRRI, the Africa Rice Center (AfricaRice), the rice program of the International Center for Tropical Agriculture (CIAT), and hundreds of other partners worldwide would look like.

That idea was fine-tuned, and the plan was endorsed by CGIAR and major national partners in Africa, Asia, and Latin America. “We also discussed this a lot with the donors, and they were very encouraging,” Dr. Dobermann adds.

Some visions turned out to be quite tricky to carry out, especially some very large-scale projects, but important lessons were to be learned from these.

“Most of the things we set out to do, we achieved,” he says. “In some cases, we achieved more than we hoped for. And then there are those that did not work out as we intended, or remain unfinished.”

Many changes had to take place on a smaller scale to support the major shifts in the big picture, including adjustments in IRRI’s internal research management structure, improved career paths for the research staff, more interdisciplinary work, and better interaction with partners.

To have the greatest impact, Dr. Dobermann believes IRRI must maintain its focus on high-quality science instead of moving too far downstream into areas for which other organizations may have the comparative advantage.

“IRRI needs to focus on innovations for the future, but these must be demand-driven and very clearly linked to real-world solutions needed by farmers and others along the value chain,” he says.

“We must also continue to find ways to work with the private sector, especially because private investment in rice R&D has been rising, particularly in Asia.

“Lastly, I think that IRRI is in need of a whole new education strategy,” concludes Dr. Dobermann, who for a time put on a farmer’s hat for the pioneering IRRI Agronomy Challenge, which many consider to be the Institute’s first “reality show” on growing a crop of rice. (see Knee-deep in mud.)

“Many of us still don’t fully understand what we’re doing and why we’re doing it,” he says. “The general education side of things—the big why—should go with everything else we teach.”

A place for big ideas

“There is never a perfect time to leave a job, because the work needs to continue,” says Dr. Dobermann, who will assume the post of director of Rothamsted Research in the U.K. “But, I feel quite comfortable leaving now because I believe that I have achieved many, if not all, of the goals that I set for myself in terms of providing a new and expanded strategy for IRRI’s research.”

He credits IRRI for being a place where big ideas get a chance at proving themselves: “I do not know of any other research institution where one can have the combination of a very challenging and inspiring mission, and a work environment like this.”

Ms. Baroña-Cruz is a writer-editor at IRRI.