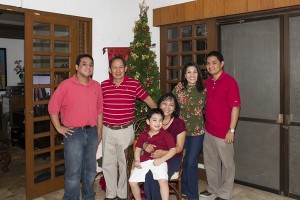 She grew up watching a young widow pull life together out of meager means to shelter her seven children. Perhaps this is why Thelma Paris, retired senior scientist and gender specialist at the International Rice Research Institute (IRRI), understood the importance of creating opportunities for those who are without it.

“Growing up, our family went through a lot of hardships,” said Dr. Paris. “When my father died, our oldest sibling was 17 and the youngest was one year old. It was a tough time for Mother.”

Her mother was a dentist at the University of the Philippines Health Service and Dr. Paris served as her dental assistant during house calls. “I started working at an early age because my mother had to supplement her salary to make ends meet,” she said. “But my mother was not only strong, she was also wise. She made good decisions.” Good decisions that would later reflect on how Dr. Paris took her own journey forward.

In 1975, her husband Tirso received a fellowship for his doctorate studies at IRRI. Dr. Paris decided to tag along with Tirso to meet his boss, Edwin Price, then an IRRI agricultural economist. The conversation ended with Dr. Price offering Thelma a job as a research assistant. Without hesitation, she accepted the offer.

After earning her master’s degree, Dr. Paris was assigned to conduct a research project calledLinking agricultural production and human nutrition in remote villages in Cagayan Province in the northern part of the Philippines. This was her first glimpse of what would be her lifetime passion.

“I interviewed a mother with a sick son,” she related. “He was diagnosed as suffering from severe malnutrition. We immediately took him to the town clinic.”

After that incident, Dr. Paris started building her personal knowledge of the role of mothers and the problems they face in terms of food consumption and nutrition.

It was her trip to India, however, that crystallized her fervor to help marginalized women.

“A video shown at a plenary session in one of the conferences I attended featured a farming couple walking on a road,” she recalled. “The wife, walking behind the husband, was carrying a heavy load of rice stalks on her head, while carrying her baby. The husband, who was walking in front of her, was not carrying anything. I was deeply moved.”

Dr. Paris knew that something in the system needed to be examined more closely and, if appropriate, changed. She investigated the factors that determine gender roles in rice-based farming systems in farming villages in eastern Uttar Pradesh, India, under a project funded by the International Fund for Agricultural Development.

Based on her studies, it was evident that women from the lower caste contributed 60–80% of the total labor inputs in rice production and postharvest activities. And yet, because of deeply embedded social and cultural norms, they did not have access to technologies such as postharvest equipment, seeds of improved rice varieties, crop and natural resource management practices, and training opportunities.

“We can no longer ignore the changing and potential roles of women farmers amidst the transformation in agriculture,” Dr. Paris said. “The number of men migrating from rural to urban areas will continue to increase, leaving more women behind to manage their farms and households, and care for young children and the elderly.”

As her way of paying back, she developed the first leadership course for Asian and African women in research and extension. She loves to mentor young women and hopes that they will follow her trail and be key agents of change themselves.

Taking opportunity by the horns

“It was in 1996 when I went to Washington, D.C., to receive my award given by the CGIAR on excellence in science—outstanding local professional,” she related. At the same time as the conferring of the award, a meeting involving directors general of all of the CGIAR centers and donor agencies was underway in Washington.

Mahabub Hossain, then head of IRRI’s Social Sciences Division, kidded that he would pay my hotel accommodations for one more day so that I could meet people and solicit funding for the Women in Rice Farming Systems research project,” Dr. Paris said. “I did not know what to do. I was a junior staff then who worked in the background. No one knew me there.

“At the event’s dinner, I was pondering how I could meet a donor. I felt that the opportunity to meet a donor was very slim. Instead of going out there to approach the big guys, I decided to step out from the crowd and I tried to compose myself. Then, out of the crowd, a man walked toward me. His name tag read Ebbe Shioler. Mr. Shioler was a senior program officer of theDanish International Development Agency (DANIDA) at the time.

“Suddenly, I felt a surge of confidence. I introduced myself to him and started talking about our gender research, and requested funding,” recalled Dr. Paris. “I introduced him to Dr. Ken Fischer, then IRRI deputy director for research, and Dr. Roelof Rabbinge, chairman of the Board of Trustees. The next day, I was invited to a breakfast meeting to discuss DANIDA’s funding for IRRI. I walked away from the meeting with a US$480,000 pledge for gender research.”

Although the passion of Dr. Paris for gender issues has always been apparent to anyone she gets the chance to talk with about her work, her marriage is a crucial aspect that affirms her life’s work.

“I am lucky to have a husband who allows me to spread my wings and still come home to a warm and loving family,” she said.

Even when she was contemplating taking up her doctorate studies abroad, her husband reassured her that he would take care of their children in her absence.

Dr. Paris pursued her PhD from the University of Western Sydney in Australia and later became an affiliate scientist in IRRI’s Social Sciences Division. “I was the first nationally recruited staff who did not have to resign from my post to get a PhD,” she said.

That, and many other firsts, defines Dr. Paris’s journey at IRRI. She happily looks back on her path even as she contemplates new trails to blaze in retirement. For now, she savors the time she spends with her husband, their two sons, Carlo and Ivan, and daughter-in-law, Myles.

“Andre, my grandson who is the apple of our eyes, just gained a new regular playmate,” Dr. Paris laughed.

Ms. Baroña-Edra is a science communication specialist at IRRI.