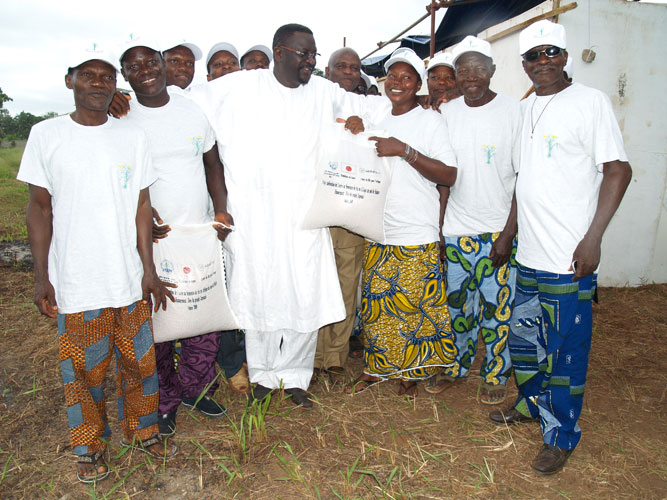 The winds of change that swept across the Africa Rice Center (AfricaRice) were unmistakable. This occurred from the time Papa Abdoulaye Seck, a specialist in agricultural strategy and policy analysis from Senegal, was appointed as AfricaRice director general in 2006 until his departure in 2013 to become Senegal’s minister of agriculture and rural equipment.

His vision and commitment to the goals of AfricaRice have transformed the Center and have taken it to new heights of excellence and impact.

As an outstanding spokesperson for effective economic policies that aim to transform the rice production of African countries, Dr. Seck has enabled several governments to formulate favorable rice policies and make rice more available to the poorest in each country. Thanks to him, AfricaRice has become a catalyst behind the remarkable visibility of the rice sector in sub-Saharan Africa (SSA).

Today, he is highly regarded by many young Africans as a man with a mission to help fulfill Africa’s dream of feeding itself and as an epitome of a new breed of leaders who believe in the need to move from theory to practice, and from thinking to action.

Inventing a new type of scientist

In joining AfricaRice, Dr. Seck reiterated his strong conviction that Africa would either develop through science and technology or not develop at all.

“One of my cherished dreams has been fulfilled—to be in a strategic position to serve Africa better because this Center is without doubt an invaluable tool to develop a more vigorous African rice sector,” he said.

As part of his vision and strategy for a competitive, diversified, and sustainable institute, Dr. Seck put forward the idea of a “total scientist.”

He said that the need of the hour for Africa was a “total scientist” who would not just confine himself or herself to a laboratory or a research station. This scientist would also be able to listen, understand, and tackle the real problems of end-users, develop winning project proposals, generate relevant knowledge and technologies, communicate effectively with partners, anticipate problems, and be ready with options.

He called for a change in attitude of researchers and research administrators when spelling out the key principles of his new vision— transparency, equity, scientific excellence, interdisciplinarity, a systems approach, strengthening of the national agricultural research and extension systems, and openness toward all partners.

Putting rice on the policy agenda of African countries

In 2006 and 2007, Dr. Seck, an experienced agricultural economist, was aware of the significant changes that were happening in the major exporting countries in Asia and that rice prices on the international market were likely to spike considerably.

In his policy communication, Rice Crisis in Africa: myth or reality, to the AfricaRice Council of Ministers in 2007, he warned of a looming rice supply crisis in Africa. He proposed some policy options for turning that crisis into an opportunity by putting the African rice industry on a path of sustainable development, capitalizing on existing science-generated technologies and on the continent’s large natural resources.

“Relying much on rice from other countries is a recipe for disaster for Africa,’’ Dr. Seck remarked. “The future of rice farming lies in Africa. Unlike Asia, this continent has great untapped potential—large tracts of land and underused water resources.”

In response to the 2007-08 rice crisis, many African countries carried out policies and projects that helped smallholder farmers gain access to improved technologies through subsidized certified seed, fertilizer, and farm machinery. The flurry of policy activity since the onset of the rice crisis has had a positive impact on rice production in SSA.

A recent analysis by AfricaRice showed that paddy rice production in SSA grew from 3.2% per year before the rice crisis to 8.4% per year after the rice crisis. Moreover, average rice yield jumped by about 30% from 2007 to 2012.

Truly, concerted efforts have succeeded in firmly putting rice on the policy agenda of African countries. AfricaRice’s research achievements and policy communication efforts have greatly helped frame the challenges, opportunities, and policy options in order to develop domestic rice production and increase the productivity and profitability of the rice sector.

In addition to the geographic expansion, the Center has transformed itself in many other ways. The budget of AfricaRice has tripled since 2006, which helped substantially increase the number and volume of joint rice projects covering member states.

“He has left behind an exceptionally well-managed, financially sound, and scientifically vibrant organization,” the AfricaRice Board of Trustees commended.

Dr. Seck is a solid believer in the power of collaboration. He and Robert Zeigler, director general of the International Rice Research Institute, made history in 2006 by entering into a real partnership for rice research.

“We have to generate knowledge and technology that can have an impact in Africa by pooling together our resources, our intelligence, and our efforts,” said Dr. Seck. “Alone, it will be impossible for anyone to carry out an effective research agenda in Africa; together, we can succeed.”

This partnership set the stage for the launch of the Global Rice Science Partnership (GRiSP), the CGIAR Research Program on Rice, in 2010.

Dr. Seck has received many awards and distinctions, including the Legion d’honneur’—France’s highest distinction—but he wears his fame lightly. In Senegal, he is known as Ndanaane, which in Wolof means “a star or an erudite who masters many subjects.”

When asked about his top three options for a profession in his youth, Dr. Seck said that his only choice was research.

As he says in his book, Eloge de la recherche: passion et tension d’un chercheur africain (In praise of research: passion and tensions of an African scientist): “Research has remained my passion for almost 30 years.”