Salinity affects around 1 million hectares in Bangladesh. Some climate experts say that sea-level rise will cause the country’s landscape to become “sicker.” 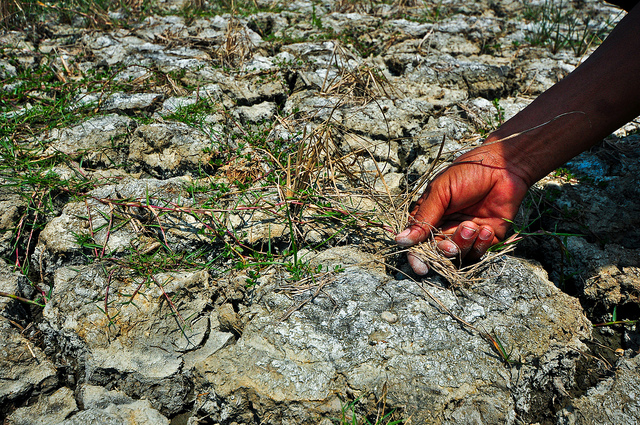 Salt as a seasoning goes well with rice— especially in developing countries, where the poor use salt as a dish to accompany their boiled rice. But, in rice cultivation, salt has a negative effect. Once salt gets to the roots, it becomes detrimental to the whole plant. (Photo by Isagani Serrano)

Each year, during the boro season (November-May), salinity is so high that a white film of salt covers paddy fields in the coastal areas of Bangladesh. For Bangladeshi farmers, this white color on top of their soil is a warning sign that their land is “sick.” Salinity is even dubbed the “white plague” in Australia’s newspapers and magazines, which indicates the seriousness of the problem when it strikes.

Salinity affects around 1 million hectares in Bangladesh. Some climate experts say that sea-level rise will cause the country’s landscape to become “sicker.”

No other country in South Asia is more vulnerable to sea-level rise than densely populated Bangladesh. With higher sea level, more areas would be affected by cyclonic surges; inland freshwater lakes, ponds, and aquifers could also be affected by saline-water and brackish-water intrusion according to the Intergovernmental Panel on Climate Change.

Md. Lutfor Rahman, a 62-year-old farmer in Satkhira, is not an alien to salinity. “Everything is lost to salinity,” Mr. Rahman said with a sigh. He was referring to the 10,000 taka (US$135) and the labor he had invested in his 0.2 hectares of land. Now, his family is left with nothing but a cow. “These rice stalks will be used as her feed,” said Mr. Rahman.

The salty challenge
Salt as a seasoning goes well with rice—especially in developing countries, where the poor use salt as a dish to accompany their boiled rice. But, in rice cultivation, salt has a negative effect. Once salt gets to the roots, it becomes detrimental to the whole plant.

According to Dr. R.K. Singh, International Rice Research Institute (IRRI) plant breeder who is now based in Africa, there are two ways to combat the problem of salinity—either change the plant’s growing environment (make it normal) or change its genetic architecture so that it can grow in such areas.

“The first approach requires major engineering processes to improve soil quality, which are often expensive for small and marginal farmers,” Dr. Singh said. “The second approach, which is breeding crop varieties with built-in salinity tolerance, is the most promising. It needs fewer resources, is economical, and is socially acceptable.”

For IRRI, making plants tolerate salt stress, up to an extent, is the way to go. The Institute has invested its resources for many years to develop varieties that can solve farmers’ problems in saline-prone areas.

Farmers’ defense
It has been more than a decade now since the discovery of Saltol—a gene that confers salinity tolerance (see Less salt, please). Glenn Gregorio, an IRRI plant breeder, credited most of salinity tolerance to the development of IR66946-3R-178-1-1, popularly known as FL478. The Saltol gene had been incorporated into this variety, and had shown significant tolerance of salinity.

Since then, through molecular-assisted breeding, the IRRI multidisciplinary team on salinity tolerance composed of physiologist Abdelbagi Ismail, molecular biologist Mike Thomson, Dr. R.K. Singh, and Dr. Gregorio as well as country partners in Asia and Africa were able to introgress Saltol into popular rice varieties.

One of these varieties is BRRI dhan47, which was released in Bangladesh in 2007. It is an IRRI-bred variety, labeled as IR63307-4B-4-3, which was evaluated and released by the Bangladesh Rice Research Institute (BRRI) in collaboration with the IRRI team for salinity tolerance now headed by Dr. Gregorio.

“The development of BRRI dhan47 is one of the best results of a strong collaboration between IRRI and BRRI,” said Dr. Md. Abdul Mannan, BRRI director general. “The transfer of materials from IRRI that can perform in stress conditions and the Institute’s assistance in our  manpower development through both short- and long-term training have played a key role in this project.”

“Now, BRRI dhan47 is creating enthusiasm among Bangladeshi farmers in coastal areas because it is helping them alleviate their poverty and secure their food for the whole year,” said Dr. Md. Rafiqul Islam, principal plant breeder on salinity tolerance at BRRI.

Just a bund away from Mr. Rahman’s farm, a 0.4-hectare rice field is teeming with ripening rice grains. It is owned by Sirajul Islam, 50. Just like Mr. Rahman, he experimented by planting different kinds of varieties each season, hoping that one could survive the land’s salinity.

The only difference between them is that Mr. Islam tried BRRI dhan47.

“With the way my rice is growing now, I am expecting a good harvest,” Mr. Islam said. “BRRI dhan47 is better,” Mr. Rahman readily agreed. Another farmer in Satkhira, Abu Abdullah, 35, was also enthusiastic. He had good reasons. Three years ago, he could not harvest anything because his fields had become too “salty” for his regular variety. During those lean years, he borrowed money even at a very high-interest rate of 2% per week.

He said that he was more than happy to see that rice could once again grow on his “salty” land. And, he is expecting to harvest 4 to 5 tons at the end of the boro season. Now, Mr. Abdullah hopes to start repaying his loans. “I may not be able to write off all my debts immediately, but, at least, I can program my payments in 2 years,” he said.

Just like most farmers in the world, Bangladeshi farmers are mostly subsistence farmers. They cultivate rice on a piece of land for their food.

“When salinity strikes, they can no longer grow food and they can’t afford to buy food,” explained Dr. Islam. “For these people, there is no option. For them, the difference of having salinity-tolerant varieties is between nothing and something.”

And, this “difference” could eventually have an impact nationwide.

“Our food security depends entirely on rice production,” said Dr. Md. Khairul Bashar, BRRI director for research. “Even if salinity-tolerant varieties cover only half a million hectares that are affected by salinity, the effect will be tremendous,” he added.

Dr. Gregorio is also happy to see this positive result because to make rice withstand salinity is the heart of his team’s job at IRRI. “Seeing our work in the field gives us this great feeling of fulfillment,” he shared.