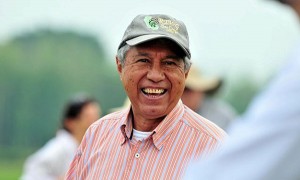 Several factors influenced César Martínez’s lifelong devotion to rice. One was an early mentor’s enthusiasm for the staple grain. Another was the importance of rice in the diet of hundreds of millions of people. From these early impressions, Dr. Martínez formed a vision of what he could accomplish for poor households by becoming a rice breeder.

This vision has guided his productive career for 45 years. During most of this time, Dr. Martínez has worked as a rice breeder with the International Center for Tropical Agriculture (CIAT), in Cali, Colombia, where he has served as Rice Program leader over the last four years.

In 1967, after finishing his undergraduate degree at the Palmira campus of the National University of Colombia, Dr. Martínez joined the Rice Program of Colombia’s national agricultural research organization.At that time, CIAT’s research was just getting underway. The Center was responsible for international rice improvement in LAC under the leadership of Peter Jennings (see Luck is the residue of design), who proposed a rice research alliance uniting CIAT, ICA, Colombia’s national agricultural research organization, and Colombia’s National Rice Growers Federation. The alliance proved so successful that it became the preferred model in forging new alliances with the public and private sector for rice improvement.

Dr. Martínez continued to build his knowledge and skills as a rice researcher, earning a master’s degree and Ph.D. at the University of Oregon in the United States, including a stint at the International Rice Research Institute (IRRI). In 1981, after completing his doctoral studies, he joined CIAT as a plant breeder in a project focusing on upland rice— which was a new frontier in the region’s rice improvement.

In 1999, following a period of stalled donor support for agricultural development, he accepted a plant breeding post with Monsanto S.A. But, CIAT, reluctant to lose a scientist of his caliber, brought him back to Colombia in 2000 as a plant breeder and, eventually, Rice Program leader.

A pillar of rice research in LAC 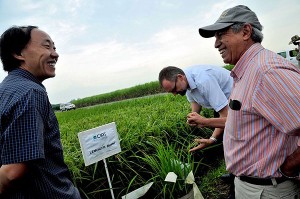 One innovative feature of his work over the last decade has involved the incorporation of wild species of rice into the development of improved germplasm, in order to widen its genetic base. Wild species, together with traditional rice varieties, have provided much useful raw material for the development of new rice populations containing genes associated with higher yield, tolerance of diverse stresses, and improved nutritional quality.

“César Martínez has made a huge contribution to the rice sector in Colombia and across Latin America over many years, giving rise to a significant impact,” said Rafael Hernández, general manager of the National Rice Federation of Colombia.

“Much of the improvement we’ve seen in the rice production of this country and region is due to his important work— for which rice growers are extremely grateful,” he added.

“César represents in my mind the ‘type specimen’ of a highly successful rice breeder,” said Robert Zeigler, IRRI director general. “He has always focused on developing a useful product but was always willing to try new ideas and approaches.”

In collaboration with international and national partners, Dr. Martínez has been recently generating materials for the development of germplasm to match local conditions and needs more closely. This research has contributed importantly to the Latin American Fund for Irrigated Rice (FLAR) —an innovative association of public- and private-sector organizations in 15 countries. FLAR provides members with improved varieties and other new technologies for rice production.

“From the founding of regional rice research,” said Gonzalo Zorrilla, FLAR’s executive director, “César’s name has been associated with the permanent search for new and better genetic materials and with the progressive development of the region’s rice sector.
“There’s probably not a single rice breeder in Latin America who hasn’t benefited through training or visits from César’s generosity in sharing his profound knowledge of the rice crop,” Mr. Zorrilla added.

Throughout an extensive career, Dr.Martínez and the CIAT Rice Program have confronted many new challenges. “Our approach,” he said, “has been to adapt the research strategy as needed, taking into account the views of all concerned.”

In the early 1970s, for example, the key challenges were to raise the yield of varieties while developing resistance to diseases such as rice hoja blanca virus and rice blast. Next, farmers needed varieties with still higher yield potential and better grain quality—requirements that were met with the release of varieties such as Oryzica 1 that showed good milling and cooking quality, high yield, and disease resistance.

Dr. Martínez helped develop many more rice varieties such as CICA 4, 7, and 8; Oryzica Llanos 4 and 5; and Fedearroz 2000—which dramatically boosted the region’s rice productivity and provided national programs with a firm foundation for continued rice improvement.

“As I look back at the six years I served as CIAT’s Rice Program leader starting in 1986,” Dr. Zeigler remarked, “César was a cornerstone of our research program, giving CIAT enormous credibility with all of our national program partners from Cuba to Chile.”

Looking ahead, César said that a big challenge now is to develop rice germplasm with greater resilience in the face of climate change—specifically higher temperatures and reduced rainfall: “We’re already developing materials that respond to these changes while also showing higher yield potential, which is critical for making the region’s rice production more competitive globally.”

This is the research role Dr. Martínez began to envision as a student—one he has handled with dedication, wisdom, and skill ever since. Although retiring now from full-time work at CIAT, he sees plenty of scope to further contribute to the rice sector. Toward this end, he’s preparing to work as an independent consultant, ready to take on the next set of challenges.

Though nostalgic about his departure from CIAT, Dr. Martínez feels satisfied with the Rice Program’s many achievements. He gives ample credit to a research team, of which he is justifiably proud and that he considers entirely capable of continuing the excellent work.

“César has built up an enormous legacy,” Mr. Zorrilla noted, “and the fruits of his 45-year commitment to rice research are evident in the region’s strong rice network and in the capable teams that will follow the route he pioneered in search of more and better rice.”

Dr. Martínez’s message for the new generation of rice scientists reflects the straightforward principles that have guided his own work: “Always keep connected with rice growers to better understand their production problems and to provide the solutions they expect, always show a willingness to share knowledge and invest in training, and always listen to the views of colleagues, so that research strategies reflect the best ideas of the whole team.”

Mr. Figueroa is an associate editor at CIAT.