As the Heirloom Rice Project concludes its two phases, we review some of the notable accomplishments delivered by the team. 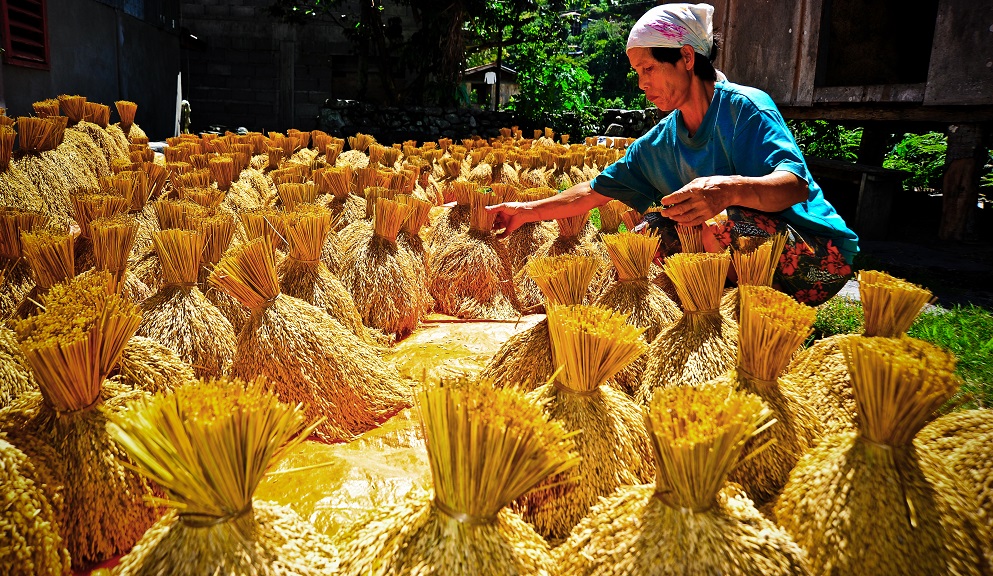 For the love of heirloom rice and deep concern for heirloom rice farmers, the late distinguished rural sociologist and Filipino National Scientist Gelia Castillo said to the Heirloom Rice Project (HRP) team, “I want to meet them (farmers) and ask, did you make money from heirloom rice? If they say yes, I’ll be very happy. But if they say no, I’ll go after you.”

Behind every great project is a great vision
The vision for HRP was shared by the institutions behind it, namely the International Rice Research Institute (IRRI), the Department of Agriculture-Regional Field Office (DA-RFO) of the Cordillera Administrative Region, and the Philippine Rice Research Institute (PhilRice). Each institution implemented the following strategies to fulfill its two goals of increasing farmers’ income and sustaining the heritage and food security in the rice terraces of the Cordillera Region. 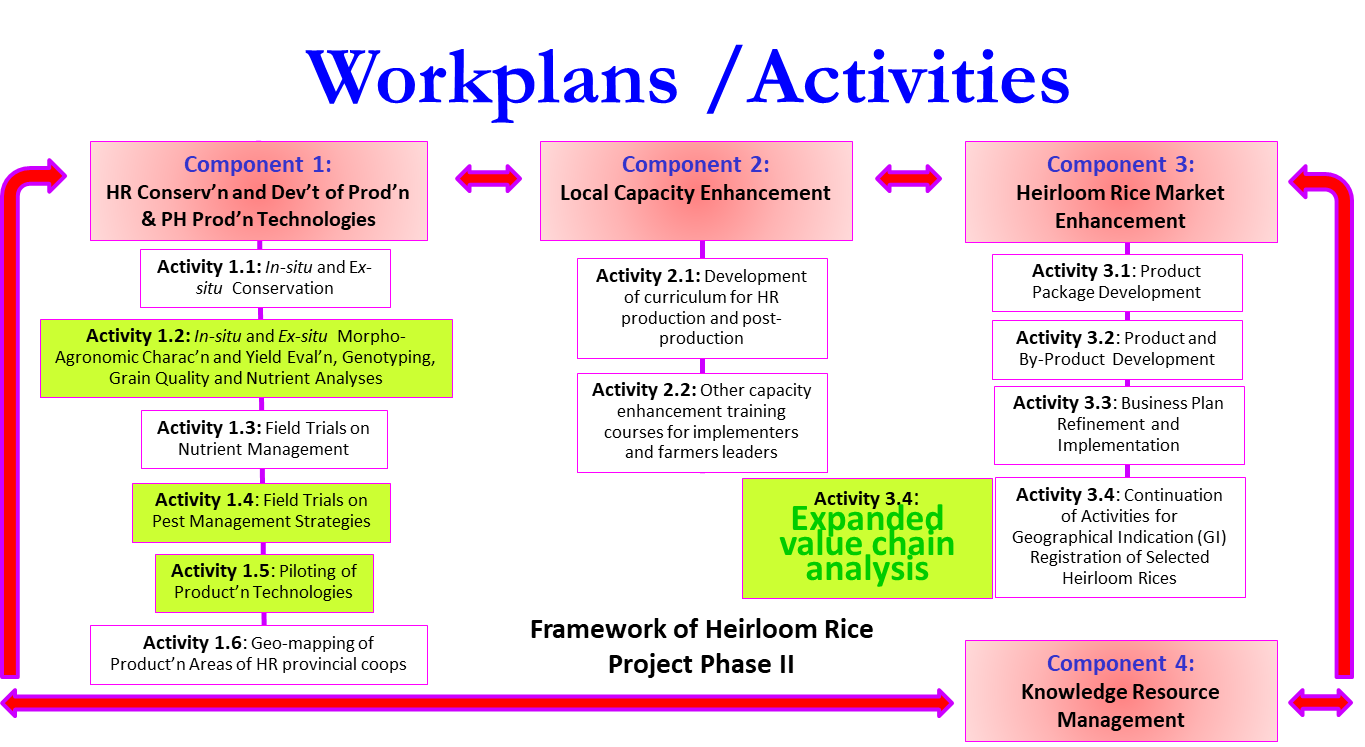 For HRP Phase II, IRRI was directly responsible for the activities highlighted in green boxes.

.
To meet these goals, HRP set five objectives to measure the success of the project. These include:

Cataloging heirloom treasures
Heirloom rice are varieties that are created through centuries of cultivation and are typically passed down through generations in a family. Morphological and agronomical traits (passport data) play essential roles in the characterization, varietal identification, and better understanding of the special traits of the landraces for the appreciation of the indigenous peoples, heirs, and sole owners of the precious heirloom rice varieties.

For IRRI’s evaluation of heirloom rice for its off-site morpho-agronomic characterization for phase I,  118 farmer-preferred traditional rice varieties with 181 variants identified through their morphological and agronomic characterization were cataloged, evaluated for their reaction to diseases, and analyzed for grain quality. These heirloom rice varieties were categorized as “with market”, “with market potential,” or “near extinction.”

Some selected varieties were further tested for their sensory traits, rheological characteristics, and anti-oxidant properties, which are highlighted as the selling points of these products. In phase II, a total of 218 entries were received and grouped into 85 variants. Variants are defined as varieties from the farmers’ field collections that have traits distinct from those varieties where they were initially associated. Other entries were classified as the same as those heirloom rice collections coming from other farmers. 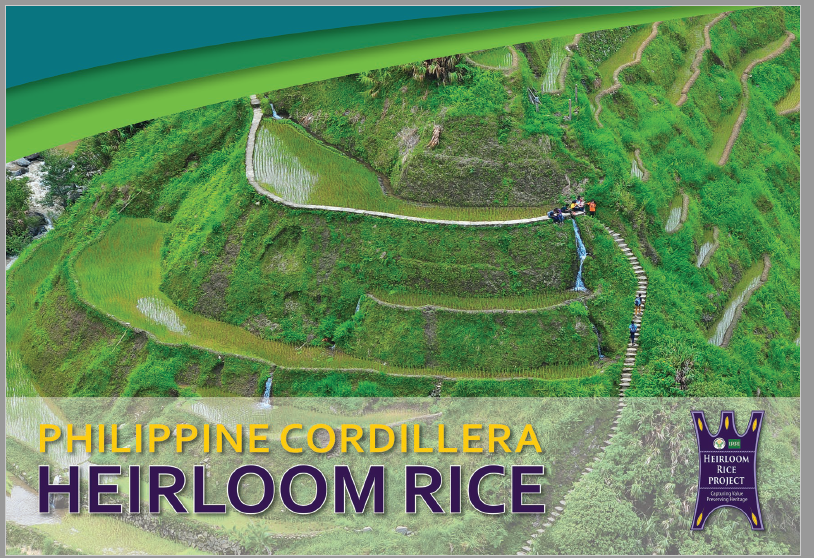 As an output for this deliverable, the varietal catalog Philippine Cordillera Heirloom Rice was prepared to list the important distinguishing vegetative, reproductive, postharvest, and quantitative traits of 62 varieties. Information on their resistance to rice blast and bacterial blight diseases is also included.

Although this catalog serves as a reference for the identification of heirloom rice varieties from seed to seed, it is also a valuable source of information for chefs, sellers, and consumers with regards to appearance (grain color), grain quality (sticky or not), eating quality (soft or hard), and other food-related traits.

(Information on 25 heirloom rice varieties are included in The Philippine Traditional Rice Varieties Seed Catalog published by the Bureau of Plant Industry and can be downloaded here.)

Enhancing farmers’ knowledge, perceptions, and management of pests
Our team conducted Knowledge, Attitude, and Practices (KAP) survey in Ifugao, Kalinga, and Mountain Province to get information on the general constraints in rice production. In the field trials of pest management strategies in the Cordillera rice fields, one of the constraints affecting the productivity of heirloom rice reported by the farmers was the damage caused by wire-like worms. Consistent with the claims of some farmers, earthworm infestation was one of the five rice production problems according to the KAP survey. The tiny worms attack all stages of the rice growth and are most susceptible in the seedling stage, according to the farmers. 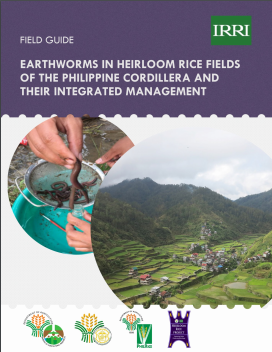 Earthworm samples were collected from the different collection sites where nine earthworm species were identified, three of which are dominant. The wire-like worm was identified as Sparganophilus cf. tamesis Benham, 1892 (Family: Sparganophilidae).

To validate the claim of the heirloom rice farmers on the damage inflicted by a thread-like worm, field micro-plot trials were conducted in Barlig, one of the hot spot areas in Mountain Province. At the end of two trials, we can conclude that S. tamesis is not a pest of rice. The thread-like earthworm did not cause any damage to rice roots, and all rice aerial parts in seedbeds, before and after transplanting, and even-up-to the crop maturity stage.

These findings must also be validated in other locations of Cordillera, and must be shared with the heirloom rice farmers, who currently perceive them as a harmful, so they can focus their efforts in controlling genuine pests.

As an output of that field survey, the team came out with  Earthworms in heirloom rice fields of the Philippine Cordillera and their integrated management, a field guide that describes each earthworm species, their habitat, management, and other general information.

Upgrading farmers’ knowledge
A total of 286 heirloom rice growers completed the PhilRice-led Farmers’ Field School (FFS) in December 2016 in Mountain Province. The first batch of FFS participants was trained in heirloom rice’s pre-production, production, and post-production technologies. Some of the farmers selected members of the local government units, and staff of DA-RFO CAR received various training to capacitate them on aspects other than growing rice such as marketing, bookkeeping, basic photography, morpho-agronomic characterization, seed health, and seed storage.

Strength in cooperation
Prior to the project, the farmers were classified into self-helped groups (SHG) based on their ethnicity and commonality in heirloom rice variety produced. They make small scale-business in nearby towns and provinces by selling heirloom rice as grain and by-products like rice wine. These SHGs were assisted by HRP to form provincial cooperatives.

The formation of HRP-assisted provincial cooperative in HRP Phase I paved the way for introducing those technologies easily to the intended farmers’ group. Aside from those interventions, the HRP team assisted the development of a model processing center in Bontoc, Mountain Province. The provincial cooperative Mountain Province Heirloom Rice Farmers Agriculture Cooperative received other essential pieces of machinery and postharvest materials from HRP through the Postharvest and Mechanization team and with the funds obtained from Kellogg’s.

The postharvest technologies are expected to lessen the time of conducting postharvest activities manually and to improve the quality of heirloom rice grains thus, resulting to increase income. Posters on the procedural operation of those types of machinery and a general flow chart of heirloom rice processing were also provided to the cooperative. 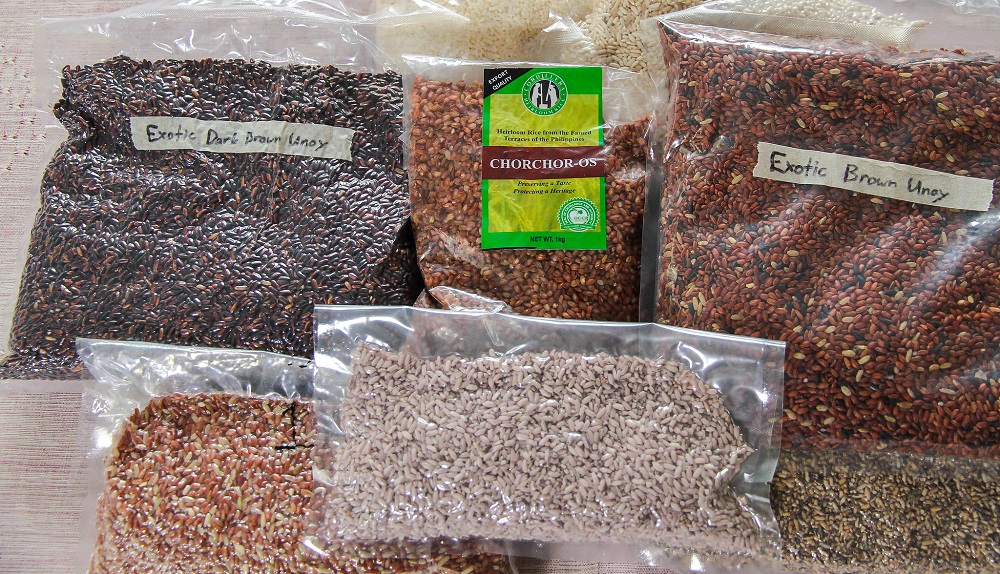 .
From mountains to market
Potential consumers of heirloom rice were narrowed down to chefs and restaurateurs, gastronomes, and health buffs who appreciate unique grain properties such as shapes, size, and color as well as nutrient content. Through the efforts of HRP and IRRI’s Communications Unit, an awareness campaign was created for the intended niche markets geared towards the health benefits and good eating qualities of heirloom rice. The campaign resulted in higher demand and an increase in their selling prices by 40-50%.

Benguet’s Balatinaw and Lablabi varieties were also served in the business class menu of the Philippine Airlines international flights during the airline’s 75th anniversary.

IRRI also provided technical assistance in developing the business plans of each cooperative and staging the Collective Trade Mark for the heirloom rice of the Cordillera. Heirloom rice’s Collective Trade Mark is also printed in the packaging material with the upgrade from ordinary plastic to label-printed high-quality plastic. The product packaging was initially designed by the Industrial Technology Development Institute under the Department of Science and Technology but it has evolved into its present carton form through the initiative of DA-RFO CAR.

Expanding the value chain
The expanded heirloom rice value chain analysis in phase 2 of HRP is IRRI’s contribution to maximize the full potential of heirloom rice as a prime commodity either by selling it as grains or as other forms of processed by-products such as rice cakes, rice cookies, and rice wine.

Processing of heirloom rice by-products is usually a small-scale business constrained by the lack of product standardization, safety procedures, and minimal links to established or commercial-scale businesses. The issues need to be addressed if farmers want to expand their operations and market.

Efforts are still being undertaken to improve further the processing, distribution, and marketing of heirloom rice-based by-products. The primary product itself commands high prices and is the primary source of income of the farmers. However, further development in the marketing of heirloom rice by-products will foster improvement and add to the welfare of the farmers.

Protecting ancient grains
IRRI, in collaboration with the Intellectual Property Office of the Philippines (IPOPhl), introduced the concept of Geographical Indication (GI) to heirloom rice farmers through a series of on-the-ground information campaigns on GI registration. The memorandum of agreement between the DA and IPOPhl for the development and protection of agricultural products complemented the activities laid down by IRRI-HRP on promulgating GI for heirloom rice.

One of the requirements for GI registration is the submission of codes of practice (COP); HRP drafted four COPs for Innawi, Ominio, Lasbakan, and Chong-ak representing the provinces of Benguet, Mountain Province, Ifugao, and Kalinga, respectively.

Beyond HRP
We are optimistic that the efforts placed in preserving the heritage, culture, and value of heirloom rice will continue as DA through the RFO CAR, PhilRice, and the DA-Bureau of Agricultural Research has committed to sustaining the initiatives on these indigenous gems after the conclusion of the project in July 2020.

DA-RFO CAR, in partnership with the LGUs, is looking into further promoting and outscaling the outputs and technologies developed under HRP to reach or assist more farmers in modern production and processing as well as enterprise development and marketing.

And we are confident that Dr. Castillo would have been very happy with the legacy the project is leaving behind.
__________________
Dr. Cope is a scientist at IRRI and the lead of HRP. Ms. Luis is a consultant at HRP.