An ambitious project plans to create an online catalog of rice genes in which breeders can choose from hundreds of thousands of genetic materials in the way people shop on the Internet.

The International Rice Genebank (IRG) is the Fort Knox of rice biodiversity. Established in the early 1960s at the International Rice Research Institute (IRRI) in the Philippines, it holds the largest and most diverse rice germplasm in the world. Currently, the collection houses more than 127,000 rice samples that include generations-old heirloom and obsolete varieties, modern varieties developed during the Green Revolution, breeding lines and special genetic stocks, and wild rice species.

The genebank ensures the long-term preservation of this important diversity as many traditional varieties and wild rice species are being lost as farmers shift to planting modern rice varieties. From 1981 to 1990, IRRI helped Cambodia to restock 766 traditional rice varieties that had been lost from samples in the genebank because of the country’s conflict.

“This is such a compelling example of why genetic conservation is so critical, particularly for countries such as Cambodia that are so reliant on agriculture and, in this case, so reliant on rice production,” said Glenn Denning, a former agronomist at IRRI. (See Revisiting Cambodia’s “Killing Fields” 30 years later.)

Tip of the biodiversity iceberg
However, preserving rice biodiversity is just the tip of the IRG iceberg. The real story goes beyond the staggering rice collection it houses. The IRG is a galaxy of uncharted genes. Each variety holds within it genetic materials that could be pivotal to the world’s food security in the coming decades of climatic uncertainties.

In the past decades, rice breeders have used less than 5% of the germplasm collection in the IRG in active breeding efforts, according to Ruaraidh Sackville Hamilton, head of IRRI’s T.T. Chang Genetic Resources Center. (See Dawn of a new era in rice improvement.)

“We have not been more efficient in using more diversity in plant breeding,” said Hei Leung, head of the Genetics and Biotechnology Division at IRRI. “We have been relying on a few major varieties such as the popular IR64.”

IR64 and other rice mega-varieties such as IR8, IR36, and NSIC Rc158 are a spectacular success. But, using a limited number of varieties for breeding produces a narrow genetic spectrum that makes many modern rice varieties more vulnerable to pests and diseases, Dr. Leung explained.

“For example, IR64 is extremely sensitive to drought,” he said. “IR64 has been good for many years but we have seen the variety succumbing to disease and pest problems in recent years. You really need to bring in genetic diversity in the future development of rice varieties.” 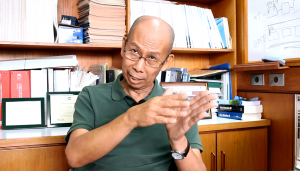 Sequence all the varieties in the IRG—10,000 genomes to start—can multiply the capacity to extract new diversity. This is a bold and ambitious objective. according to Dr. Leung. (Photo: Christopher Gapuz)

A key to the fort
The first step to unlock the full potential of the IRG is the 3K Rice Genome Project (3K RGP) , a collaboration between IRRI, BGI in Shenzhen, China, and the Chinese Academy of Agricultural Sciences (CAAS). The project has sequenced 3,000 rice genomes of varieties and lines from the collection in the IRG and CAAS’s genebank. In 2014, data from the 3K RGP were released as a global public good and they provide rice breeders and geneticists with a foundation for the large-scale discovery of new and important genetic materials for developing tougher and more productive varieties.

The 3K RGP demonstrates the power of deep exploration of the genebank and offers opportunities to understand the depth of rice diversity and the population structure of rice types important in breeding. The SNP-Seek database derived from the 3,000 genomes is being widely used by the global community as shown by the large number of accesses. This enables breeders to find genes for specific geographic and climatic adaptation not present in the current gene pool of cultivated rice.

Although a true milestone in rice breeding, the historic 3K RGP probably reveals less than 29% of the rare alleles in the genebank. Alleles are different versions of the same gene. For example, the famous SUB1 gene enables rice to survive floods for up to two weeks. It is possible that several alleles of this critically important gene exist and one version could give rice plants the ability to survive floods for a longer duration. A better allele could give rise to newer flood-proof varieties for the 20 million hectares of rice land in Asia. These areas are regularly devastated by floods that are predicted to occur more frequently and that could last longer because of climate change.

The discovery rate from the 3K RGP indicates that breeders have only just begun to mine the opportunities to be uncovered by more comprehensive sequencing.

“We need to sequence additional varieties to capture more rare alleles that are potentially important,” Dr. Leung said. “If we can sequence all the varieties in the IRG—10,000 genomes to start—we can multiply the capacity to extract new diversity. This is a bold and ambitious objective.”

Once the additional 7,000 genomes have been deciphered, it is expected to reveal an additional 15% of the rare alleles in the collection. The information will be added to the existing 3K RGP dataset online, thus creating a virtual counterpart of the IRG that would be available to all breeders via the Internet, free of charge: the Digital Genebank.

The Digital Genebank
The Digital Genebank would be to rice breeders what online shopping sites (such as Amazon, Alibaba, and eBay) are to consumers today. And, it will offer them the same advantages: accessibility from any location, convenience, and speed.

“When breeders walk into the genebank, they usually ask which one to use,” Dr. Leung said. “They don’t know what they are getting. Breeders would grow maybe a few hundred to thousands of lines per year to find some new materials for their breeding program.”

With the Digital Genebank, breeders can focus on a small portion of the genebank to identify potentially useful genes—such as for tolerance of flooding or drought, or for resistance to pests or diseases—using a computer and study them more thoroughly. The process, called “allele mining,” significantly reduces the time and effort in identifying these important traits.

“That’s when you can start exploring new genetic diversity to increase the resilience of rice to adverse environments,” Dr. Leung said. 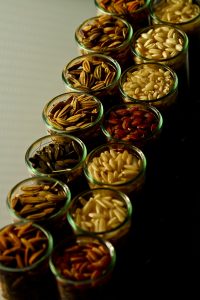 With the Digital Genebank, breeders can focus on a small portion of the genebank to identify potentially useful genes using a computer and study them more thoroughly. The process significantly reduces the time and effort in identifying important traits. (Photo: IRRI)

“Taming” wild genes
One of the most exciting uses of the digital genebank is the mining of the wild rice germplasm.

“No one takes care of wild rice but it is out there,” said Flora De Guzman, manager of the genebank. Obviously, wild rice species are genetically wired to thrive in environments free from the features of cultivation: irrigation, fertilizer, and pesticides. Those genes can be useful in developing future rice varieties that can better tolerate future environments.

“For example, right now, we don’t have resistance to stem borer in our breeding programs,” Dr. Leung added. “Our job is to determine how many lines in the Digital Genebank have that resistance.”

Among the important traits of genes of interest found in wild rice that the Digital Genebank could help breeders identify are the sheath blight resistance of Oryza barthii, the stem borer resistance of O. longistaminata, and the grassy stunt virus resistance of O. nivara, along with the yield-enhancing genes of O. rufipogon.

A major target of this global initiative will be concentrated on Myanmar, where rice production needs sustained support. Over the past 60 years, the country’s climate has been experiencing higher mean temperature and increasing frequency of erratic weather patterns such as greater rainfall in most areas and more dry spells in some areas. The late onset and early termination of the southwest monsoon have also been observed. Overall, there has been an increase in extreme weather events and a rise in sea level, according to the Global Climate Change Alliance.

For Myanmar, the tailored combinations of traits conferring tolerance for flooding, salinity, and drought will be particularly important. Armed with the Digital Genebank, rice breeders can then work toward producing new varieties that will directly benefit farmers.