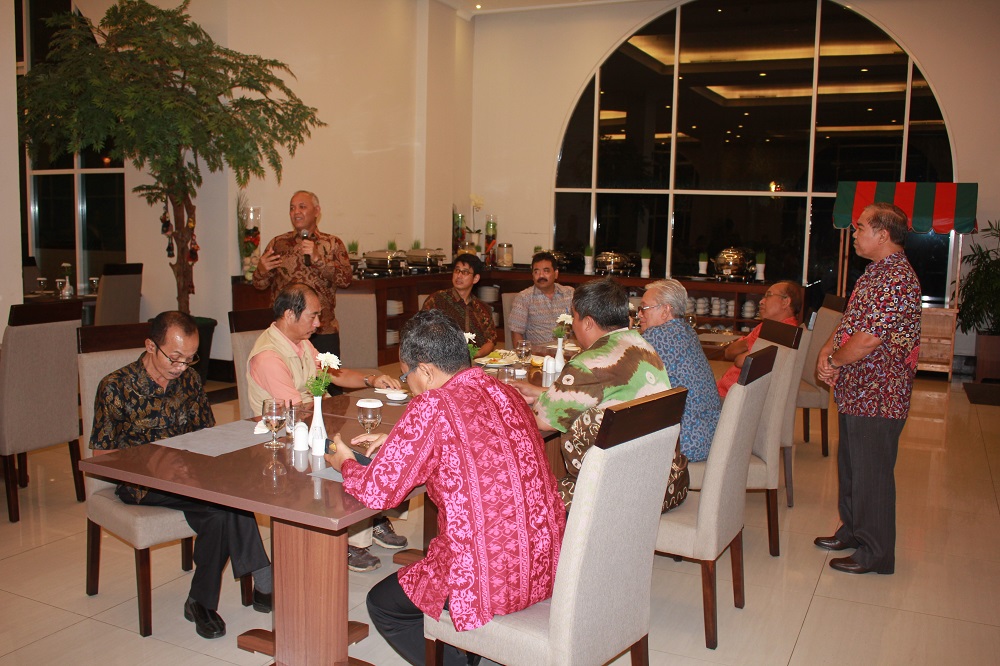 Dr. Hasil Sembiring (standing on the left) welcomes the participants to the focus group discussion on the prototype of WeRise RR for Indonesia’s rainfed areas. The technology is primarily aimed at contributing to the national rice program of Indonesia. (Photo: CCADS-RR)

BOGOR, Indonesia, 15 August —A focus group discussion with key stakeholders was recently held to introduce the prototype of a seasonal climate prediction-based decision support system. The app, called WeRise-RR, is designed to improve rice-based cropping systems in Indonesia’s rainfed areas. The focus was on how to effectively disseminate the new technology by considering the viewpoint of farmers.

WeRise-RR is a new version of the web-based app originally developed in 2014. It provides rainfed rice farmers with crucial weather information such as the start and end of the rainy season and rainfall distribution. The app also gives farmers options on optimum sowing times, the variety to plant, and the timing of fertilizer application.

“We hope that, by using WeRise-RR, farmers will be able to utilize their limited resources more efficiently through choosing a suitable variety, avoiding failure in crop establishment, and more effective fertilizer application,” said Dr. Edi Husen, deputy director for research collaboration and dissemination of the Indonesian Center for Agricultural Land Resources Research and Development. “This would enable rainfed rice farmers to have surplus harvests more often—making farming more profitable—thereby stimulating investments and attracting the youth to work in agriculture.”

Indonesians are among the world’s major rice consumers with an annual per capita consumption of around 127 kilograms. The country needs to increase its rice production by 8 million tons by 2019.

Indonesia, however, has been widely affected by climate anomalies, such as drought, over recent years that have caused substantial damage to rice production. Lack of rain during the monsoon season makes it challenging for the country to achieve its targeted rice production goal. Erratic rainfall has made it difficult for farmers to determine when to plant their crops.

So, the country’s agricultural research and development programs have placed great importance on the rice sector, particularly through the framework of its national program for achieving self-sufficiency by increasing productivity and production of major food commodities.

WeRise-RR was developed by the International Rice Research Institute (IRRI)-Japan collaborative research project (IJCRP) via its effort on Climate Change Adaptation through Development of a Decision Support Tool to Guide Rainfed Rice Production (CCADS-RR). It is aimed at contributing to the national rice program of Indonesia, the pilot country for testing this technology.

“This technology is for Indonesia and other countries that need to improve their rainfed rice production,” emphasized Dr. Keiichi Hayashi, CCADS-RR project coordinator and IRRI soil scientist. “While there are challenges, there are also opportunities. That’s why we are involving key stakeholders at this stage. Identifying a strategic adoption pathway is important.”

Dr. Achmad Mudzakkir Fagi, former IRRI Board of Trustee, also expressed his strong support for the project. Dr. Zulkifli Zaini, IRRI Representative to Indonesia, recommended the key institutions to develop a joint proposal to use the current resources and maximize the capacities of the various institutions that will play key roles in the dissemination of WeRise-RR.