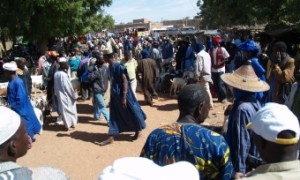 The world population is expected to increase almost as sure as the sun rises in the east. Much of this increase will be concentrated in developing countries, with sub-Saharan Africa (SSA) leading the way, as its population is estimated to double from 770 million in 2005 to 1.5 billion by 2050.

According to the United Nations Food and Agriculture Organization (FAO), global food production must increase by 70% to feed the world—a challenge that has never been as demanding as now, in the face of climate change and soaring food prices, which inflict serious damage on the food security of the poorest households.

Moreover, the rate of yield growth of major cereal crops dropped from 3.2% per year in 1960 to 1.5% in 2000. While environmental degradation heightens in several parts of the world, the potential for an increased use of agriculturally critical natural resources such as land and water is declining. Climate change is aggravating the severity and uncertainty of weather events.

However, lessons learned from the past indicate that advances in science and technology can expand the world’s agricultural frontier and sufficient food can be produced to nourish the growing population in the future.

We believe that SSA will play a significant role in global food security in the coming decades. Unlike Asia and Europe, where the availability of potential land and water for agriculture is declining, Africa still has a large reservoir of under-used agricultural land and water resources.

In SSA, agriculture remains a powerful engine for economic growth, food security, and poverty reduction, accounting for 35% of GDP, 75% of employment, and 40% of exports. Estimates say that a dollar of farm income increases the overall economy (e.g., $1.88 in Burkina Faso and $1.48 in Zambia). Despite this, SSA governments have failed to prioritize the sector and to reverse decades of policy bias against agricultural production.

In 2003, African countries adopted the Comprehensive Africa Agriculture Development Programme in Maputo, Mozambique, and pledged to increase agricultural spending by at least 10% of the total government budget by 2008. But, only eight countries have reached the 10% budget quota for agriculture, and the continent’s average is only 4–6%.

Without consistent investment in its own domestic agricultural resources, SSA cannot fully seize the opportunity for transforming this strategic sector.

Given the context specificity of agriculture, technology transfer has limited effectiveness. In the 1960s, a stock of proven agricultural technologies in Asian countries was assumed to be effective and adaptable to African conditions.

But, many imported varieties failed to outperform local species. In fact, out of more than 2,000 Asian varieties of mangrove rice for testing in the African environment, only two performed comparably to the best local varieties. Generally, varieties imported from other regions into SSA were not adapted to local conditions.

The failure of direct technology transfer underscores the need for developing endogenous research capacities in SSA. Although the internal rate of return on agricultural research is above 20%, agricultural R&D has suffered from decades of inadequate investments, particularly in the 1980s and 1990s. A recent report, however, indicates a 20% increase in spending between 2001 and 2008 on agricultural R&D.

Agricultural extension and advisory service represent another key area of investment to stimulate agricultural productivity in SSA through widespread dissemination of new information and knowledge.

Increased agricultural production is key to enhancing food security in sub-Saharan Africa, where the population is expected to increase from 770 million in 2005 to 1.5 billion by 2050. (Photo: R. Raman)

AfricaRice has shown that integrated crop management (ICM), a step-wise approach of integrating new technological options into production systems with full farmer participation, is a promising way for SSA, in view of the large gaps between actual farmers’ yields and attainable yields under better management. In Mali, ICM technological options increased its average rice yield in irrigated areas from 2 to 6 tons per hectare.

Closing the yield gap for the main staple food crops in SSA is critical to increase agricultural productivity while meeting the regional and global food security challenge.

AfricaRice’s recent simulation illustrates this point well. By bridging the attainable yield gap in the three main rice ecologies (upland, rainfed lowland, and irrigated), while doubling the areas under irrigated and lowland rice production, SSA can meet its requirements in rice and even produce a surplus of 5 million tons for export.

Despite the availability of improved seed technologies developed by agricultural research organizations in Africa, adoption by farmers remains limited. Greater public involvement is needed to overcome market failures that are affecting the national seed system.

In addition, core infrastructure such as electricity, storage, and rural roads is vital to transform SSA’s agriculture. For instance, better road infrastructure would help reduce transportation costs and improve access to markets.

The average amount of fertilizer applied in SSA was only about 9 kilograms per hectare in 2002, against the global average of 101 kilograms. This gap clearly indicates that African agriculture has enormous productivity potential if only it had better access to fertilizers.

A combo of four
Yet, producing enough food at the aggregate level will not necessarily translate into adequate food security and equitable access to food by all. Improving agricultural productivity should be a constitutive part of a propoor growth strategy that sustains the generation of sufficient off-farm jobs.

To feed the world in 2050, an intelligent combination of four factors is essential: appropriate technologies, good infrastructure, favorable economic and institutional environment, and the preservation of natural resources. Only then can science be certain of making the greatest impact on resource-poor farmers and the burgeoning urban population in 2050.

Dr. Seck is the director general of the Africa Rice Center.