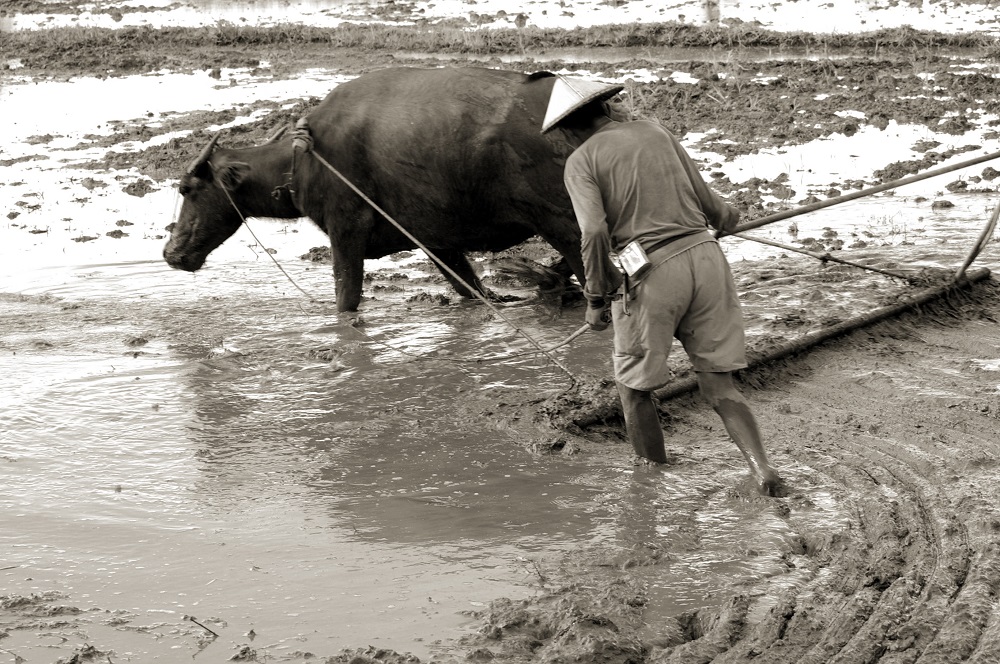 .
The year 1960, when the International Rice Research Institute began in the Philippines, marked the first international research and training center devoted to increasing rice production through breeding high yielding varieties and modern production techniques. As a result, the recent generations of Filipino farmers use modern rice varieties, fertilizers, pesticides, and irrigation and they may find the practices of their ancestors—before rice science became available—quite odd.

The Philippines is the world’s eighth-largest rice producer with 4.4 million hectares of rice areas in 2010 and almost 70% of that is irrigated, according to Ricepedia. The country’s production increased by a third, from 10.5 million t in 1995 to 15.8 million t in 2010. Because of their higher profitability for farmers, modern high-yielding varieties account for the vast majority of rice production, with less than 3% coming from traditional varieties.

Ancient migrant
Rice is an ancient crop that originated in China where it may have been domesticated 9,000 years ago in the Yangtze Valley. It found its way to the Philippines through Indo-Malaysians, Chinese, and Vietnamese migrants, according to Rice Matters. The earliest evidence of rice in the Philippines was found as carbonized rice in pottery in Cagayan Valley in Northeastern Luzon dating back to 3400 BCE. Incidentally, present-day Cagayan Valley is an administrative region composed of Batanes, Cagayan, Isabela, Nueva Vizcaya, and Quirino Provinces is one of the country’s highest rice producers with about 139,000 hectares planted to rice.

Ifugao rice gods called bul-ul are carved from hardwood and consecrated by a mumbaki. They serve as guardians of the rice crops in the field and the grains stored in granaries. (Photo by Isagani Serrano, IRRI)

..
As the Filipino people’s staple food, it shouldn’t be surprising that early farmers did everything they could to ensure a bountiful harvest. In the Cordillera Region, just west of the Cagayan Valley, ritual priests known as mumbaki sought the aid of their ancestral spirits (anitos) and rice gods called bul-ul to provide them with the right conditions during planting and protection against diseases and pestilence so farmers may enjoy bountiful harvests. 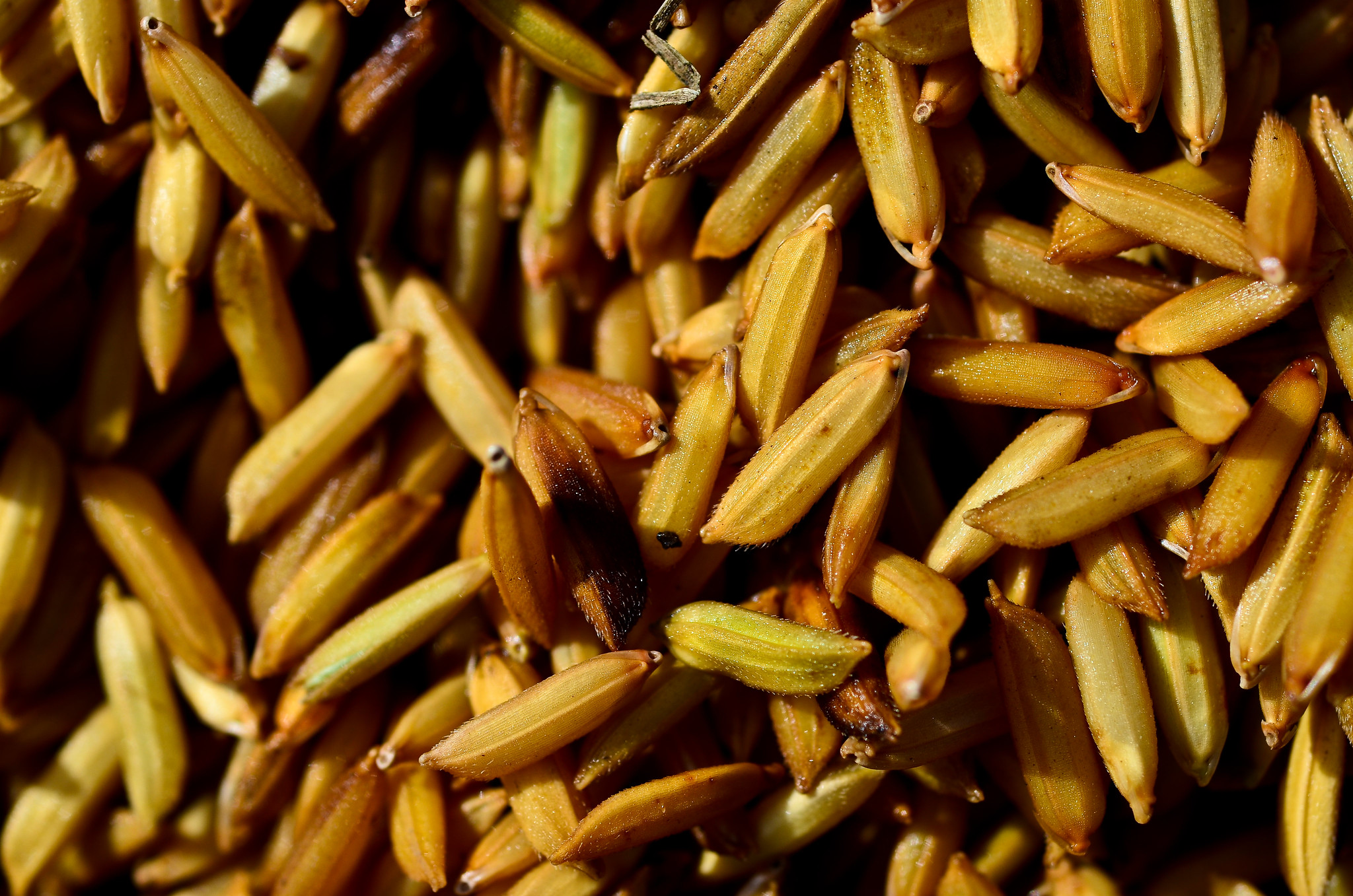 .
Sowing superstitions
Modern rice growing teaches the importance of using high-quality seeds and proper land preparation before sowing. Sowing good-quality seeds can increase yield by 5−20% enables farmers to grow crops with the most economical planting rate, a higher percentage of seeds emerging in the field, minimum of re-planting, vigorous seedling establishment, uniform plant stand, faster growth rate and better resistance to stress and diseases, and uniformity in ripening. Land preparation is important to ensure that the rice field is ready for planting. A well-prepared field controls weeds, recycles plant nutrients, and provides a soft soil mass for transplanting and a suitable soil surface for direct seeding.

However, for the early farmers of Leyte, planting rice was guided by superstition, not science. In Folk practices and beliefs of Leyte and Samar, author Richard Arens, described the many rituals practiced by farmers in Leyte, an island in Central Philippines, for every aspect of rice production to ensure the health and safety of their crops.

There were many animistic ceremonies for sowing the rice seeds, transplanting the seedlings, harvesting, and storing the paddy. These rituals shared a common thread in that the farmers called on spirits of anitos, fairies, and other supernatural beings to protect their crops. Although the practices predate the arrival of Christianity in the country, these were eventually influenced by it.

Some farmers mixed rice seeds with rice blessed by Catholic priests and have been set aside since the Holy Week. Others collected ashes from wood-burning stoves to be blown by the wind in all directions. The act symbolizes the farmers’ wishes for every grain of his seed be scattered to every nook and corner of their field like the ashes so that every grain will have a chance to sprout, Dr. Arens noted. 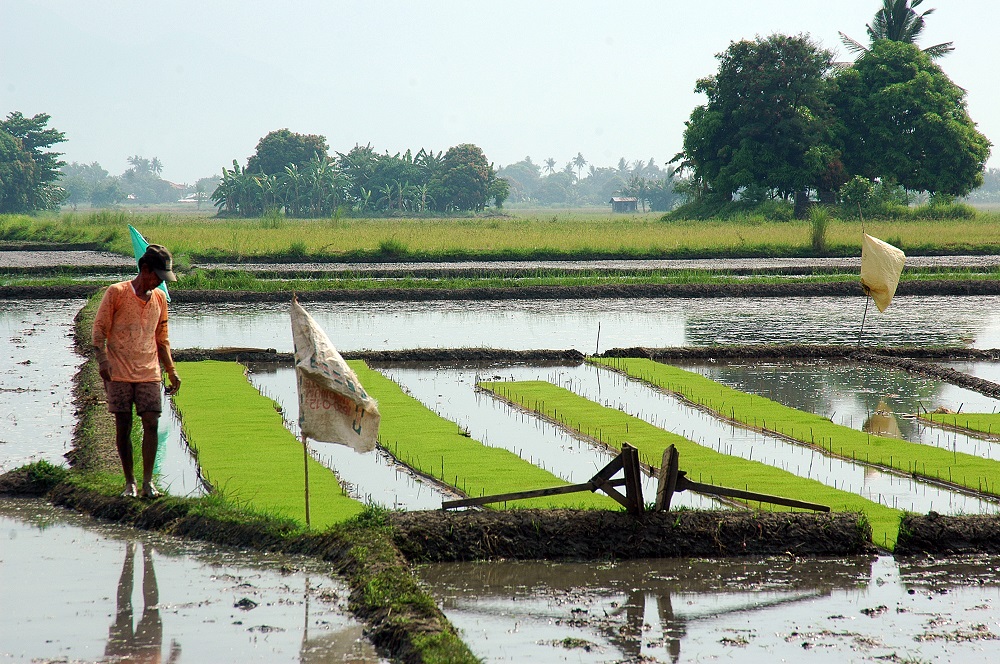 A farmer in the Philippines checks his carpet-like “dapog” or seedbed if it is ready for transplanting. (Photo by Raymond Panaligan, IRRI)

.
Planting the crop on time into a well-prepared seedbed will help produce a fast-growing, uniform crop that will be better able to compete with weeds and pests and produce higher yields. In preparing the nursery seedbed, the surface needs to be level, free of weeds, and well-drained. Low rates of nitrogen and phosphate fertilizer can be applied to the nursery. The best time to plant depends on the locality, variety, water availability and the best harvest time.

But the old farmers of Leyte believed sowing of the nursery must be done before (November 2) otherwise the seedlings will be short-lived. They will either dry up or be devoured by insects. Another traditional practice is sowing rice seeds only on odd number days of the month.

At the time of sowing, a comb, a needle, and a tabog plant (possibly Swinglea glutinosa of the citrus family) are placed in the middle of the seedbed, according to Dr. Arens. The tabog plant acts like a scarecrow while the needle was believed to make the rice seedling straight and vigorous. The farmers believed the teeth of the comb will make the leaves of the rice plant straight so that they do not interlace with the other leaves thus avoiding mutual shading. 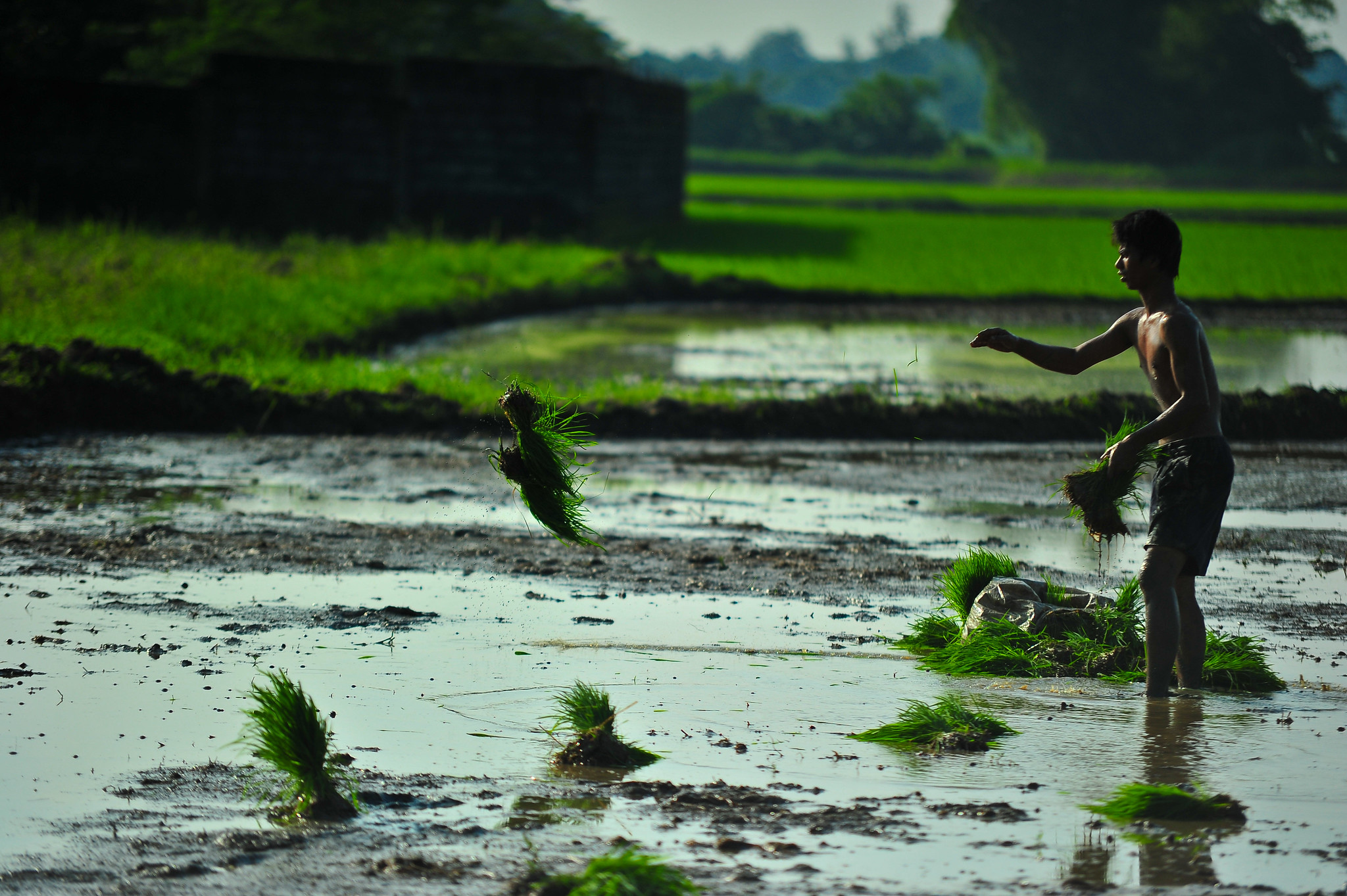 In the olden days, transplanting rice was based on the position of the moon as well as the ocean tides. Today, farmers transplant seedlings about 21 days after sowing in the nursery. (Photo by I. Serrano, IRRI).

.
The moon, the tide, and cats’ eyes
In modern rice production, transplanting of rice seedlings from a conventional nursery is done following proper land preparation, and water and pest management. The seedlings are transplanted in fields up to about 21 days after sowing (or 7-leaf stage). Reducing the time seedlings spend in the nursery from 20 to 10 days (seeding at 3000 seeds per square meter in the nursery) can increase yields by as much as 1 ton per hectare.

But in the old days, transplanting is based on the position of the moon as well as the ocean tides. Dr. Arens reported that the full moon, new moon, and the first quarter of the moon were considered auspicious times. But planting during the last quarter of the moon was to be avoided. Farmers also took transplanting cues from the ocean tides. It was considered a good time to transplant the seedlings when the tide is high. Farmers who live too far from the seashores to see the tidal movements looked at the eyes of cats instead. Large or dilated pupils indicated a high tide and, thus, a good time to transplant rice seedlings.

Living on a prayer
In the age of the Internet, the Rice Doctor on the RKB website and the Rice Crop Manager are available for consultation 24/7 in all areas with telecom access. These ICT tools help extension workers and tech-savvy farmers correctly identify diseases, pests, nutrient deficiencies, and other problems based on symptoms. By eliminating the guesswork, farmers can initiate more accurate control measures specific to their conditions.

Early Filipino farmers, on the other hand, relied on the services of “witch doctors.”

Before sunrise a paratikaq, or master of ceremonies, performs the initial ritual. He goes to the field carrying tanglad (lemon grass), bagacay (a species of bamboo), and calipayan and panhauli (medicinal herbs). 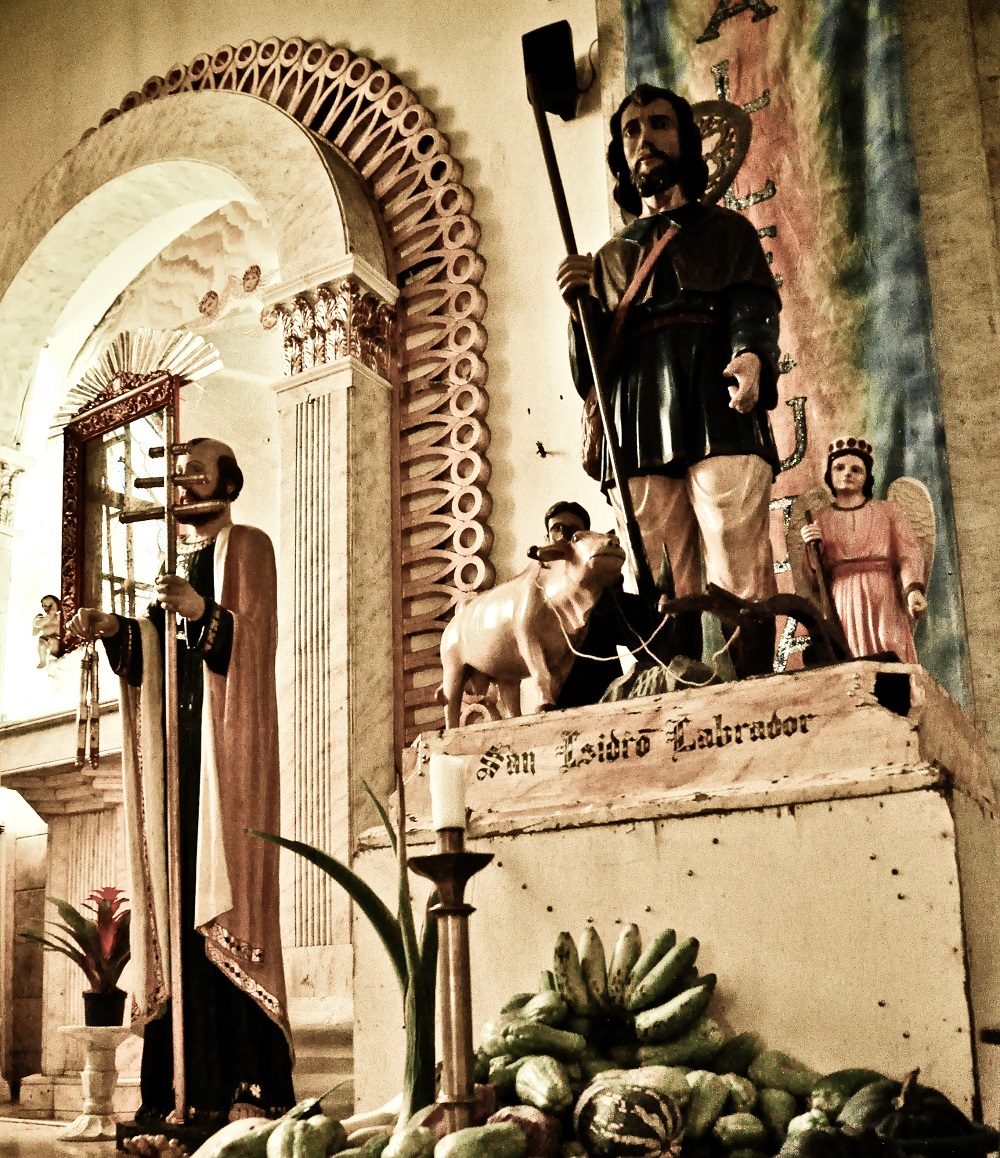 .
In the Christianized version of the ritual, the paratikaq makes the sign of the cross and prays the Credo, Our Father, Hail Mary and Glory in honor of the Blessed Virgin. Another Our Father is offered to Saint Isidore (San Isidro Labrador), Spanish farmworker who became the Catholic patron saint of farmers, and one to the Patron Saint of the parish. Thereafter he prays the Hail Holy Queen.

Immediately after the prayers, he plants the herbs he has brought with him. These are symbolic expressions of his request to God: that the crops may grow as robustly as the tanglad plant, that insects may find the rice plants as itchy as the bagacay and stay away, and that the panhauli may keep diseases at bay. The calipayan, on the other hand, is to bring happiness during planting. Planting rice has to be a happy affair and people bring their musical instruments and play early in the morning at the gathering of the planters, according to Dr. Arens.

After the herbs have been planted, the paratikaq takes a bundle of rice seedlings from the nursery for the first transplanting. But before he plants the first seedlings he throws a bundle of seedlings as an offering to God. A second bundle is thrown for the evil spirits which bring pests. Finally, a third bundle is offered to the soil. 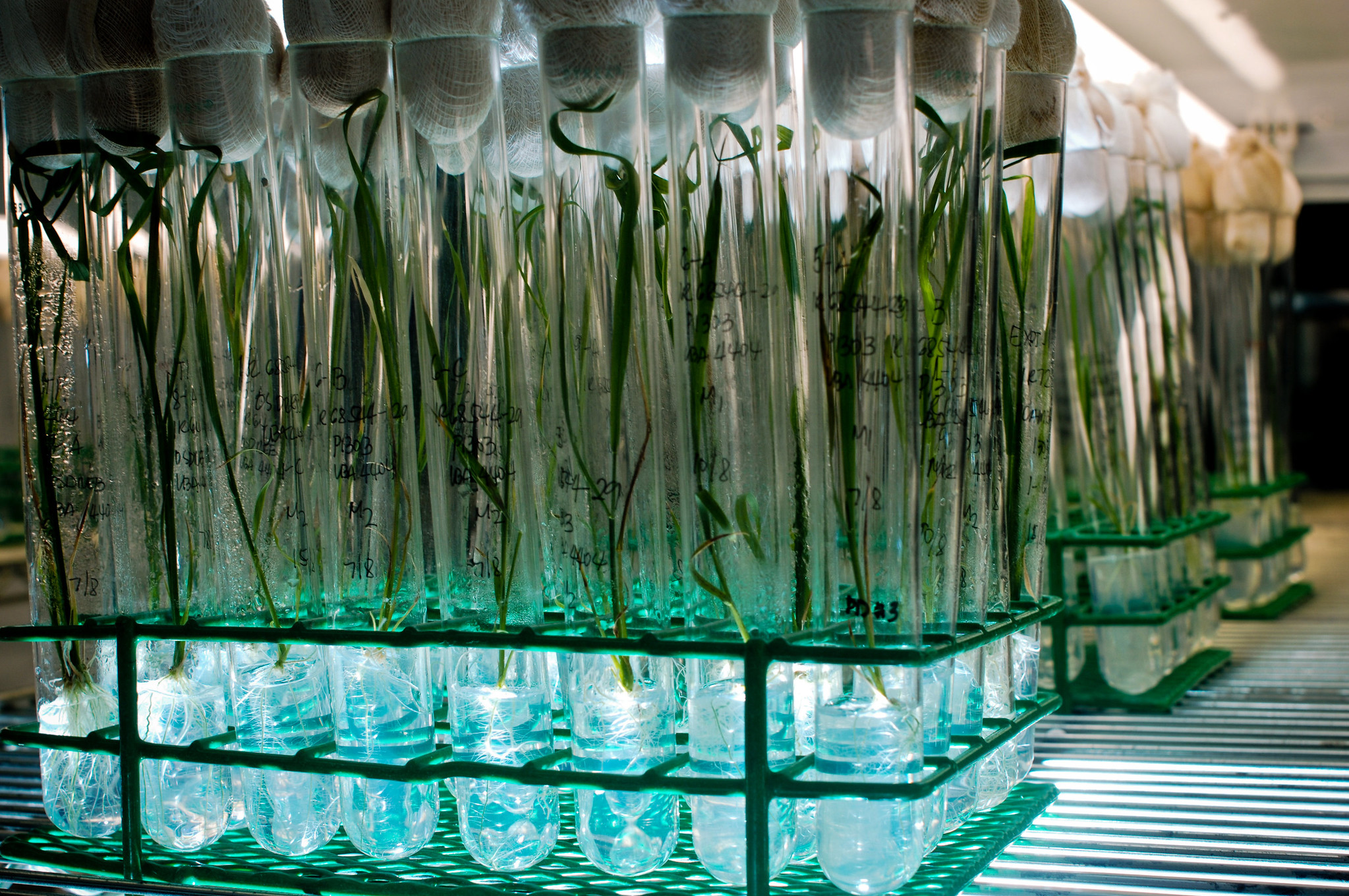 But rice farming has come a long way from magical to molecular breeding. Science has superseded many of the superstitious beliefs that the early farmers relied on for bountiful harvests. And with modern high-yielding varieties and technology, rice farmers are reaping more from their land and, consequently, earning more.