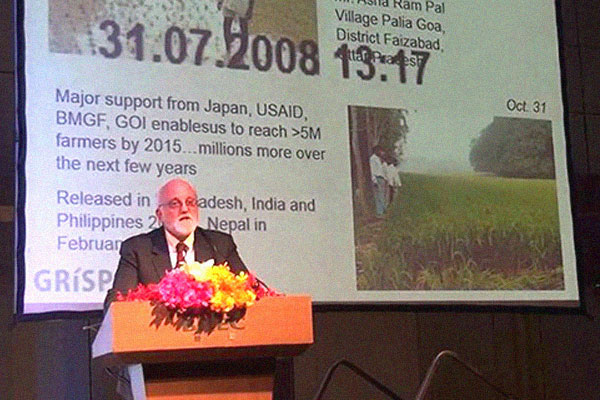 Green Revolutions GR2.0 and GR3.0 will benefit the poorest of the poor who, for various reasons, did not reap rewards of the first one. (Photo: Gene Hettel)

Several million of the world’s poorest farmers are already adopting one of the first new technologies of the second Green Revolution (GR2.0)—flood-tolerant rice! This was the optimistic pronouncement of Robert Zeigler, director general of the International Rice Research Institute (IRRI), during his keynote address to kick off the 4th International Rice Congress (IRC2014) in Bangkok on 28 October 2014. More than 1,500 delegates from 69 countries attended the week-long IRC, touted as the Olympics of Rice Science.

It is thanks to one farmer, Mr. Asha Ram Pal from the Indian state of Uttar Pradesh, that Dr. Zeigler pinpoints, at least in his opinion, the exact start of GR2.0. It was 31.07.2008 13:17 (1:17 in the afternoon of 31 July 2008)—the exact moment in time when, ignoring the advice of his neighbors by showing faith in the science, Mr. Pal decided not to plow under his severely flood-ravaged and sick-looking rice crop on his 1-hectare field that had been submerged for around 17 days across two floods.

Well, those rice plants with the SUB1 flood-tolerance gene recovered to yield 4.5 tons, a good yield for any rainfed paddy in the world!

“This was—unambiguously— the start of GR2.0,” Dr. Zeigler said, “because for any agricultural revolution to be successful, farmers must adopt the product of the science. Since then, Sub1 rice varieties have spread like wildfire in eastern India and other regions where flooding is a perennial problem for farmers growing their crop in such marginal environments.”

According to the internationally respected plant pathologist who has led IRRI for the last 9 years, the new technology can be attributed primarily to high-level and high-quality science—science publishable in the top scientific journals in the world—brought to bear on the problems in farmers’ fields.

Indeed, one scientific study indicated that “the scheduled castes are likely to be a major beneficiary from the spread of Swarna-Sub1 in India. “When I read this last paragraph of the study, I literally got goose bumps,” he told the delegates. “The scheduled castes are the lowest of the low. So, this technology—the most exquisite research from some of the finest laboratories in the world—is significantly benefiting the poorest of the poor. Now if that is not scientific revolution, I don’t know what is. It gives me great pride to be a scientist and to be associated with the people who have done this work.”

GR3.0 will stagger the imagination

“GR2.0’s run will be fruitful—and quicker than GR1.0—particularly for farmers in marginal weather- sets the stage for GR1.0 stressed environments,” Dr. Zeigler predicted. He said there is a very wide array of problems, previously thought to be absolutely insurmountable, that researchers can now address more rapidly using the scientific tools coming out of parallel high-science revolutions in genetics, molecular biology, and plant physiology.

According to Dr. Zeigler, GR2.0 is allowing researchers to successfully meet great challenges with unprecedented research efforts that will result in unparalleled impact—ranging from mining the rice genomes and wild relatives of rice for needed traits to developing climate-ready rice and from fighting human malnutrition with more nutritious rice to better management of water and nutrient resources in farmers’ rice fields.

“Over the next 10 to 20 years, during which GR2.0 will phase into GR3.0, we will seize opportunities for sustainable rice production in ways that will stagger our imagination,” he confidently forecasted. In another bold prediction, he envisions the start of GR3.0 sometime around 2030 when farmers start planting yield plateau-busting C4 and nitrogen-fixing rice varieties and consumers begin finding broad-based nutritious rice in the marketplace.

Dr. Zeigler summarized for the delegates what he calls the ongoing Green Revolution Series. “GR1.0, which basically built a high-yield plant architecture adapted to the low-stress environments, is justly criticized for benefiting only farmers in those relatively stress-free areas,” he said. “GR2.0 is incorporating tolerance to severe stresses and additional nutritional value and ultimately, as already mentioned, is leaving no farmer behind. GR3.0 will accelerate the evolution of the rice plant itself. It will effectively produce designer rice by leaving no Oryza species untapped.”

Young scientists will lead the charge

During a media briefing following his keynote, Dr. Zeigler told reporters that leading the charge of the sciencebased GR2.0 and 3.0 is the next crop of vibrant, intelligent, and caring young scientists. They are in league with IRRI through the Global Rice Science Partnership and its five rice-breeding hubs in Asia, Africa, and Latin America. Many attended their first-ever International Rice Congress in Bangkok. Twenty-nine of these young rice scientists were chosen to present their research during the science sessions and they were formally recognized for this notable achievement during the IRC gala dinner (photo above).

“The future of rice science is at stake because without new blood in the experiment plots and laboratories, the outlook for a continuing GR2.0 would be grim and there wouldn’t even be a GR3.0,” he warned reporters.