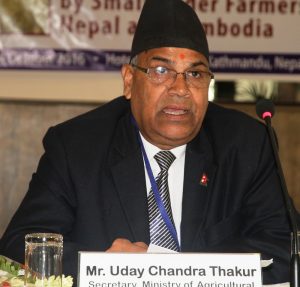 This was an observation made during the 2nd review and planning workshop of Accelerating the Adoption of Stress-Tolerant Rice Varieties by Smallholder Farmers in Nepal and Cambodia (USAID-ASTV) Project. As the delivery of stress-tolerant rice varieties, especially those that are capable of surviving drought and flooding, gains momentum, the varieties are expected to create significant impact in farmers’ fields.

“I am very glad to report that the Government of Nepal has already released and popularized eight drought-tolerant rice varieties and two flood- and submergence-tolerant ones among farmers,” said Mr. Uday Chandra Thakur (photo), secretary of the Ministry of Agricultural Development, during the event held in Kathmandu. “These stress-tolerant varieties are high yielding and could change the livelihood of rainfed lowland farmers.”

Dr. Yubak Dhoj G.C., director general of Nepal’s Department of Agriculture (DoA), expressed his satisfaction over the increased dissemination of the seeds among farmers in the 22 districts covered by USAID-ASTV.

“On behalf of the DoA, we heartily thank the International Rice Research Institute (IRRI) for developing and disseminating climate-resilient rice varieties, which have helped to increase rice production both in drought- and submergence-affected areas,” said Dr. Dhoj G.C. “This has contributed to the country’s food security. Our district agricultural development officers report that farmers are encouraged to plant Ciherang-Sub1 and DRR 44 as early- and main-season varieties because of their early maturity.

“IRRI has provided opportunities to more than 320 scientists and technical extension officers for short-term and long-term training and advanced studies,” added Dr. Dhoj G.C. “The USAID-ASTV Project provided home and abroad training opportunities to 98 Nepalese scientists, extension officers, technicians, and staff of private seed companies in 2015 and 2016. This has tremendously helped our capacity building.”

“I am glad to see the publication of the Rice Bulletin, too,” said Secretary Thakur. “In order to create mass awareness among farmers about climate-smart rice varieties and technologies, a strong communications strategy should be built-in and embedded within the project itself. The release of climate-smart rice varieties is a practical example for helping farmers in Nepal adapt to climate change.”

The Rice Bulletin is a new quarterly publication of the IRRI-Nepal Office with the objectives of providing information about new rice varieties developed in collaboration with the Nepal Agricultural Research Council. The publication also helps disseminate improved rice seeds and new technologies to farmers and provide training and workshops for rice seed growers, distributors, and farmers.

Funded by the United States Agency for International Development (USAID), the project, led by IRRI, was launched to help solve some of the problems plaguing rice productivity in Nepal and Cambodia. Dr. Abdelbagi Ismail, IRRI’s principal scientist and project leader of USAID-ASTV, acknowledged the contribution of all the participants to the group discussions and the development and refinement of the project’s workplan for 2017.