The most significant achievement of the year was the thorough testing and the eventual naming of a rice variety by the Institute. From mid-1965 through 1966 the selection, designated as IR8-288-3, was tested thoroughly in India, Pakistan, Thailand, Malaysia, and the Philippines.  Furthermore, seed of this selection has been sent to over 60 locations all over the world. 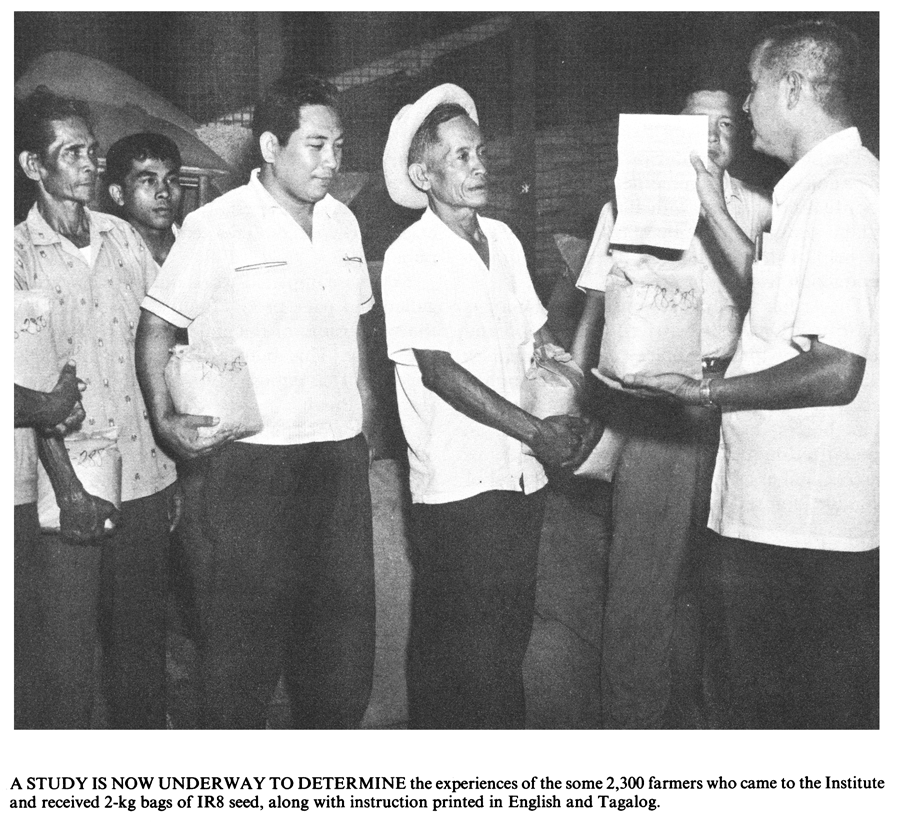 Director’s Introduction
The most significant achievement of the year was the thorough testing and the eventual naming of a rice variety by the Institute. From mid-1965 through 1966 the selection, designated as IR8-288-3, was tested thoroughly in India, Pakistan, Thailand, Malaysia, and the Philippines. Originally it was tested on experimental farms only, being compared not only with the best local varieties but also with many other promising selections from the Institute’s breeding program. Before the year ended, IR8-288-3 had been tested on private farms also in each of the five countries mentioned above. Furthermore, seed of this selection has been sent to over 60 locations all over the world.

Although the results at all locations have not been received as yet, the yields in the above-named 5 countries were truly phenomenal. New yield records were established on experimental fields in all of the countries. During the dry season, yields in India and the Philippines topped 10,000 kg/ha, and even during the cloudy monsoon season yields in all countries ranged from 5,000 to as high as 9,000 kg/ha.

This selection has yielded well over rather widely varying climatic conditions. For example, in the Sind District of West Pakistan, with a total rainfall of only 1.71 inches during the past 12 months, irrigated IR8-288-3 produced over 10,000 kg/ha. It has performed well from near the equator to beyond 30° north or south latitude.

The Institute produced over 74 metric tons of IR8-288-3 seed in July 1966 and over 60 tons of this was planted in the Philippines. The rest was sent to other countries. When the Philippine crop was mostly harvested and additional yield data had been received from other countries, the Institute decided to name the variety. On November 29, 1966 press releases were sent out announcing that the Institute had officially named its first variety, which henceforth would be called IR8.

The seed committee, when discussing the release of this variety, recommended to the Institute that the same system used in the case of this variety be continued with future varieties, viz. the letters “IR” followed by a number. 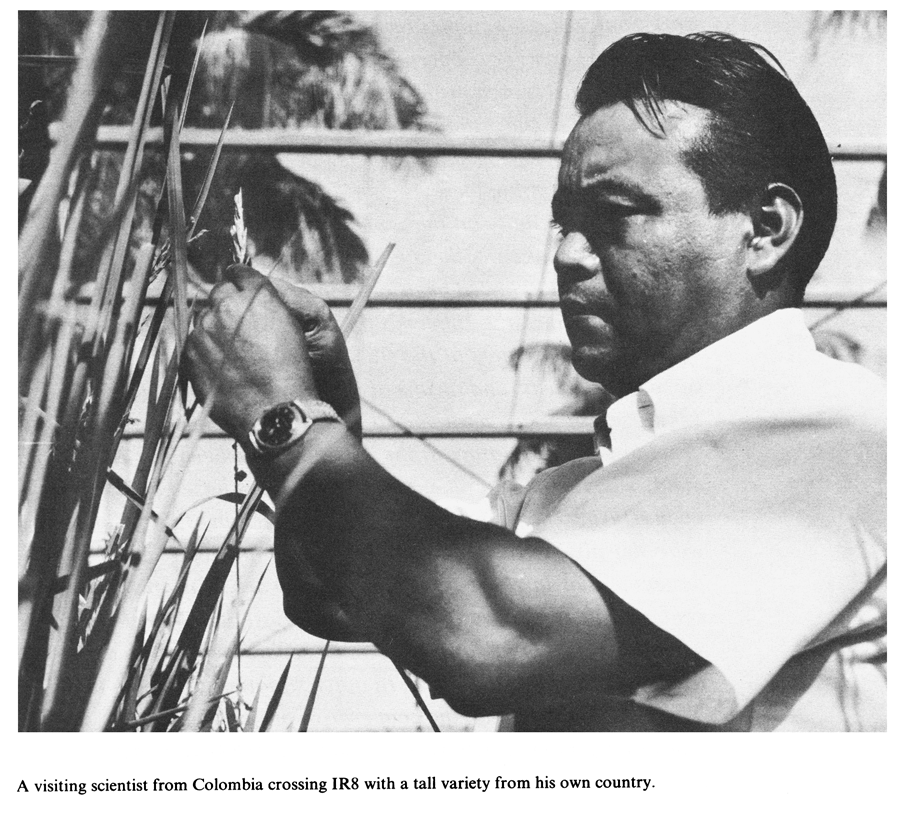 Among many other things, the Varietal Improvement Department is engaged in adding to IR8 those qualities that it needs to be even more outstanding. These qualities include greater disease resistance and improved grain appearance and quality.

Another significant achievement of the Institute is a broad one, but one which will soon have an impact on rice yields throughout tropical Asia, and eventually throughout the world. Reference is made to the changing appearance of experimental rice fields in all the countries where major cooperative programs are in operation. If one had visited any of the tropical rice stations of Asia 3 years ago he would have seen mostly tall, low-yielding tropical rice plants. Fertilizer applications would have been low and essentially all varieties would have lodged before harvest time. Today things are different, not only in the fields but in the minds of the scientists. On every major rice experiment station in India, Pakistan, Thailand, Malaysia, and the Philippines, one sees many experiments using the new, short, non-lodging varieties. Fertilizer applications have increased threefold and yields have soared to establish, as mentioned earlier, new all-time records.

The high yields obtained by Institute agronomists in 1965 on our own experimental fields have been eclipsed during 1966. In the dry season, IR8 yielded 10,130 kg/ha, and in five different experiments yields exceeded 9,000 kg/ha. To our knowledge, these are the highest yields ever obtained in Los Barlos. In the continuous cropping experiment, from which we obtained a 3-crop yield total of 17,800 kg/ha in 1964-1965, 20,178 kg/ha was produced in 1965-1966. This may or may not be a world record for a 12-month period but it is certainly close to it. In any event, we are essentially certain that it has not been equaled anywhere in Asia.

Another important achievement of the Agronomy Department was the identification of a weed control chemical which is highly effective at low levels of concentration, thus pointing the way toward truly inexpensive chemical weed control. The chemical is 2, 3, 5-trichloro-4-pyridinol, and not more than 200 g/ha is needed to give good control of grasses, sedges, and broadleaved weeds. This is the first highly selective herbicide tested by the Institute that shows real promise at a cost well within the reach of small farmers.

In South Vietnam alone there are over 2 million hectares of so-called acid-sulfate clays that are unproductive because of high acidity and sulfur content. The Institute’s soil chemist has studied these soils at the Institute, and by adding combinations of lime and manganese dioxide, he has been able to promote normal plant growth. During 1967 he will conduct field experiments on acid-sulfate clays in several Southeast Asian countries to determine whether these same methods will have practical application in reclaiming these unproductive land areas. 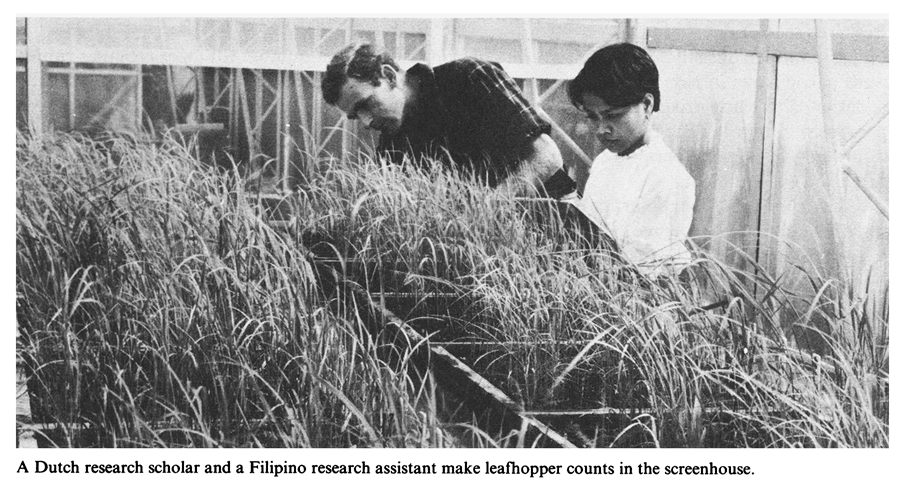 The plant protection program is one of the most active in the Institute. The screening of vast numbers of varieties and genetic lines continues and we are still finding abundant germplasm with resistance to all major diseases.

The bacterial leaf blight disease, so prevalent in the Philippines, Pakistan, and India, has received special attention during the year. It has been found that there are a number of different strains of the causal bacteria and that they vary considerably in virulence. However, some varieties have resistance to the most virulent strains, so the varietal resistance approach still offers the most practical means of control.

The entomologist is continuing his studies on the use of systemic insecticides for the control of the rice stem borer and other insect pests of rice. The work with lindane has been completed and attention is now being directed toward other materials. Diazinon is one of the most promising chemicals, which not only controls all species of the stem borer but reduces leafhopper populations sufficiently to exert considerable control over the incidence of virus diseases.

The Office of Communication had the largest class yet in the rice production specialist training program, numbering 29. Five came from countries other than the Philippines. The Filipinos, however, came from a wide range of organizations including the Agricultural Productivity Commission, the Bureau of Plant Industry, the University of the Philippines College of Agriculture, the Philippine Rural Reconstruction Movement, the Bicol Development Board, and several large private firms.

Another major advance in 1966 was the establishment of accelerated rice improvement programs in both East and West Pakistan. The Ford Foundation made grants to the Institute to cover the costs of these two programs. The activities include such things as supplying an advisor; research and testing in plant breeding, entomology, and soil fertility; the training of scientists abroad; travel grants for senior staff; the purchase abroad of needed equipment for key experimental stations; and supplying consulting scientists on a short-term basis. The training of extension workers in East Pakistan has been started. This was done locally in Pakistan, with IRRI staff assisting. It is expected that a similar program will be tried in West Pakistan in 1967. 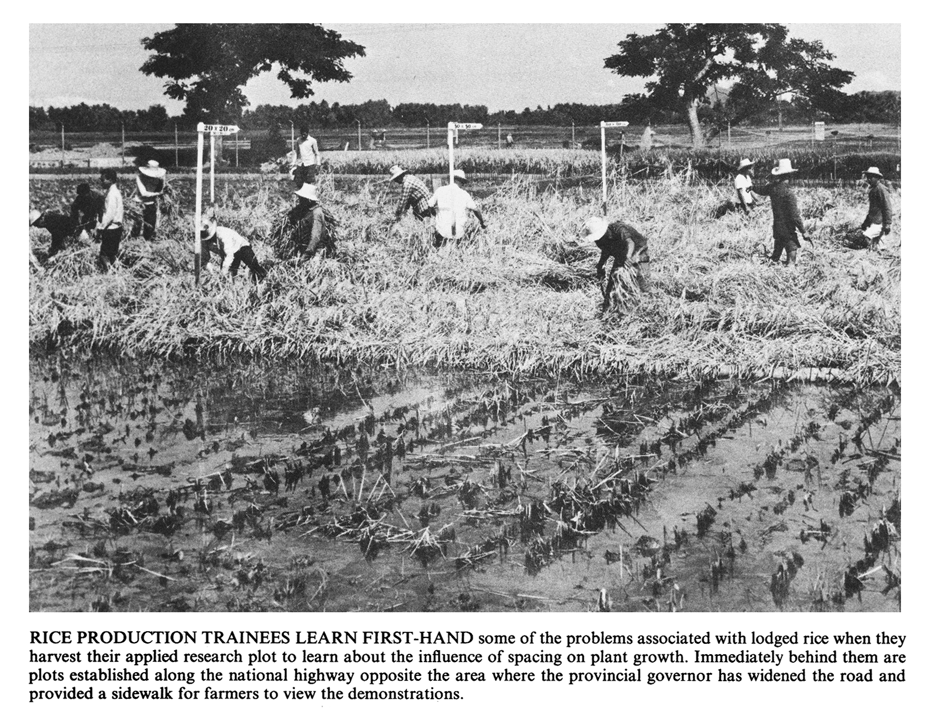 One could go on citing the work of the Institute during 1966, but suffice it to say that the program in all departments continues at a good pace. Agricultural engineering is deeply engaged in a thorough and comprehensive study of the economics of power use in the tropics. The chemistry department is searching among the 10,000 varieties in our world collection for those that have an exceptionally high protein content.

Also, a search is being made for varieties with a genetic factor for high lysine, comparable to that of the maize variety that contains the “Opaque II gene” and which was discovered at Purdue University several years ago. The microbiology department has demonstrated bio-degradation of gamma-BHC in flooded soils, thus offering an explanation for the lack of accumulation of this insecticide in rice fields.

The statistics department is assisting the field research workers in many ways, including such things as developing better methods for describing the rice canopy, collecting statistics from rice farmers, and making principal component analyses of the agronomic characteristics of rice. The plant physiology department continues to explore the reaction of the rice plant to its environment with particular reference to solar energy, soil nutrients, and length of day. The agricultural economics department, although understaffed temporarily, has conducted some excellent studies on the costs and returns from rice crops managed over a range of intensities.

The Institute, as its special contribution to the International Rice Year, made a 25-minute color motion picture film, showing what the application of modern science and technology could do toward increasing rice yields.