A while back, I read an interesting story extolling the merits of the new flood-tolerant rice, Swarna-Sub1, in the newsletter of the Stress-Tolerant Rice for Africa and South Asia (STRASA) project. The author, Manzoor Hussain Dar, International Rice Research Institute (IRRI) senior associate scientist based in India, included two photos of the same farmer, Nekkanti Subba Rao, in the same field on his Andhra Pradesh farm. 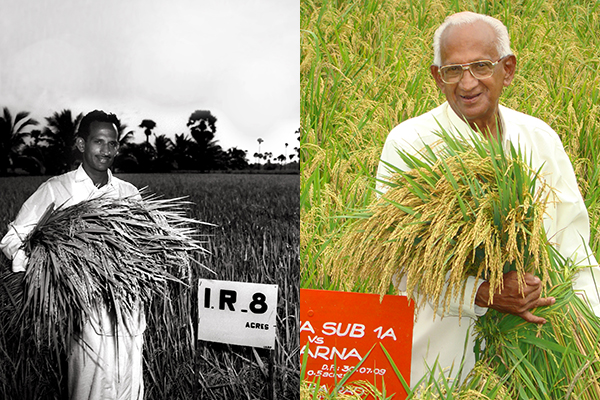 NEKKANTI SUBBA RAO helped kickstart both the first and second Green Revolutions in India by promoting and distributing IR8 in 1967 and Swarna- Sub1 in 2009. (Photos: IRRI ARCHIVES and Manzoor Hussain Dar, IRRI)

Spanning two Green Revolutions
I found this striking because the photos had been taken 42 years apart! One depicted a young 29-year-old farmer in 1967 clutching a bundle of lush grain-laden panicles of IR8, the rice variety that started the first Green Revolution (GR1.0) in the 1960s. The other showed a wizened 71-year-old in 2009, still with a twinkle in his eyes and the same bright smile, in a similar pose.

However, this time, Mr. Subba Rao was grasping a bundle of panicles of Swarna-Sub1, a popular variety (Swarna) made flood-tolerant by incorporating the SUB1 gene. Many have since considered Swarna-Sub1 and other popular varieties with a SUB1 background to be the launching pad for the second Green Revolution (GR2.0), which is being publicized to leave no poor farmer behind (see Green Revolutions 2.0 & 3.0: No farmer left behind).

Well, the Rice Today staff needed to look no further for a cover photo subject to grace this issue, which is celebrating 50 years of rice research in India. It was an easy decision. The 1967 photo was on the cover of our October-December 2006 issue to observe the 40th anniversary of the release of IR8 in Asia.

Mr. Subba Rao’s farming livelihood and his on-farm research have spanned the same period. During this time, he has continuously collaborated with the All India Coordinated Rice Improvement Project in testing new varieties, producing certified seeds, and establishing beneficial links between scientists and farmers. Truly, this has made him an integral part of the history of the Green Revolutions in India.

Testing and distributing IR8 and Swarna-Sub1
He proudly recalled that, in 1966, he was one of the first farmers to plant Taichung-Native 1 (TN1) for national demonstrations. TN1 was actually the first indica rice variety carrying the semidwarfing gene, sd1, derived from Taiwanese variety Dee-geo-woo-gen, which is also a parent of IR8. However, IR8 and subsequent IRRI varieties proved to be more disease resistant and quickly replaced TN1.

In 1967, Mr. Subba Rao tested IR8 on his farm and supervised its first large-scale demonstration and multiplication—on about 2,000 hectares near his home village of Atchanta—following instructions from the government of India. The next year, IR8 was planted on 1,600 hectares in his village and the rest was history, with the seeds soon being distributed throughout the country. So, in addition to being called Dhaan Pandit (rice expert) by his neighbors, he is also known by the moniker “Mr. IR8,” which still resonates with many Indian farmers to this day.

Dr. Dar, who coordinates research and seed upscaling and dissemination-related activities for STRASA in stress-prone rainfed lowlands in South Asia, has had the privilege of working with this pioneer farmer for the last 6 years. “Mr. Subba Rao has been instrumental in promoting and distributing Swarna-Sub1,” he says. “In fact, in 1979, he grew, tested, and inspired his neighboring farmers to grow the original Swarna, even before it was officially released, because of its high-yielding and good eating qualities. After its release, Swarna covered the entire Godavari Belt in India and continues to be the variety of choice among millions of farmers in India and neighboring countries.”

Unfortunately, Swarna yields often decrease during seasons with lots of flooding. So, Mr. Subba Rao was especially excited when IRRI breeders incorporated the SUB1 gene into Swarna. It was a dream come true.

Says Dr. Dar: “Mr. Subba Rao evaluated Swarna and Swarna-Sub1 side by side in his field and invited hundreds of farmers to come see the difference. Luckily, for observational purposes, the seedlings got submerged that season and Swarna- Sub1 performed so much better than Swarna. He distributed Swarna-Sub1 seed from his 2008 kharif harvest to other farmers, who multiplied it during the rabi season 2008-09. This resulted in the spread of Swarna- Sub1 to nearly 1,000 hectares during the 2009 kharif season in a dozen surrounding villages.”

A farmer-scientist
“In 2012, I gave him 1 kilogram of seed of Ciherang-Sub1, a short-duration, flood-tolerant variety with high grain quality,” says Dr. Dar. “Not surprisingly, he multiplied it in the kharif and also cultivated it during the following boro season. It had higher yield than other popular rabi rice varieties and thus spread through hundreds of hectares in a few years and has become a popular variety. Through the local university, he has also helped distribute 1,000 mini-kits of Ciherang-Sub1 to the farmers before its release. That’s how he works.

“I consider Mr. Subba Rao a scientist himself,” says Dr. Dar. “He is truly an inspiration to the farmers in the area and has a large following. He is the best promoter around of the new technologies and he creates a lot of awareness among the farmers.”

No stranger to IRRI
In 1985, during IRRI’s 25th anniversary, the Institute organized a multilevel symposium that included scientists, political leaders, and—most importantly—14 outstanding farmers identified from 10 nations. Two Indians were in that group to visit the Philippines, Sardar Jagjit Singh Hara from the Punjab (see In the Punjab: an outstanding farmer revisited) and Andhra Pradesh’s own Dhaan Pandit! Mr. Subba Rao and his fellow outstanding farmers generously shared their experiences with IRRI scientists and scholars during that event. He was part of the group because he was already averaging 8 tons per hectare on his 10-hectare farm back then in the mid-1980s.

“Science has a great role to play in helping farmers because the cost of cultivation continues to increase and outbreaks of insect pests and diseases result in severe losses,” he said to the participants during the 1985 symposium. He added that community participation and proper government policies could significantly influence returns.

Flash forward 29 years to 1 October 2014. Mr. “IR8” was back at IRRI Headquarters in the Philippines to mingle with more than 400 Filipino farmers during the Institute’s Araw ng Magsasaka sa IRRI (IRRI’s Annual Farmers’ Day). He repeated his 1985 message to a new attentive audience by sharing his experiences, practices, and insights. It is clear that he brims with pride about his role in helping usher in both GR1.0 with IR8 and GR2.0 with Swarna-Sub1 and the even better varieties that are following.

“He is always excited about innovative varieties and technologies,” concluded Dr. Dar. “I wish I had a new product to give him every year because, through his network, we can best bestow maximum benefits to the thousands of farmers in the region.”