In the new era of genomic research, “genome editing” technology has been developed, consisting of new tools that enable not only rapid alterations in the DNA code but also precise targeting within genomes. In a sense, genome editing is effectively rewriting the DNA code. 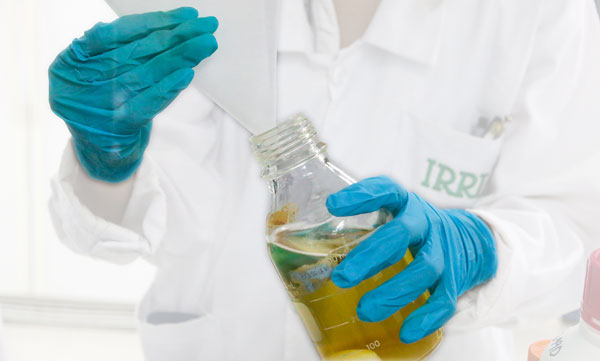 Similar to genetic engineering, genome editing also requires carrier vectors to deliver these tools into cells, but the insertion happens in a targeted manner, not randomly. (Photo: Jec Narciso/IRRI)

Since scientists unraveled the mysteries of DNA, many technologies and applications have been developed to speed up the process of evolution and natural selection. In plants, traditional breeding takes advantage of existing natural genetic variation to introduce desirable traits into cultivated crop varieties. But conventional breeding methods are no longer sufficient for improving crops to keep up with rapid environmental changes. Thus, new biotechnology methods have become necessary. Mutagenesis is one of the options for creating genetic variation.

Gene mutation—a natural process that creates random but permanent alteration in the DNA sequence that makes up a gene—is considered as the raw material of evolution. Since the 1940s, breeding programs used chemical mutagens or radiation treatments to induce random mutations in a genome. These methods produced huge mutated populations, which had to undergo rigorous selection to identify plants with desirable traits. 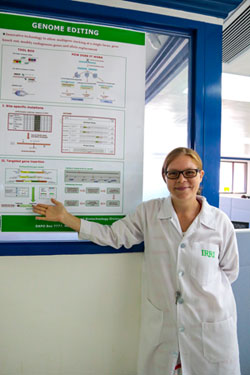 Molecular scissors
“As sequencing whole genomes has become cheaper and faster, we can now use genome engineering to introduce desired changes in the DNA sequence and carry them out precisely and rapidly,” said Dr. Prabhjit Chadha-Mohanty, who is among the first scientists at the International Rice Research Institute (IRRI) to use this technology.

In contrast to conventional genetic modifications, in which external DNA is randomly inserted in the genome, genome editing tools are like molecular scissors, allowing scientists to make cuts at predefined sites. Subsequently, the break is repaired by the internal DNA repair systems of the plant.

An option for genetic engineering
Similar to genetic engineering, genome editing also requires carrier vectors to deliver these tools into plant cells. But, unlike genetically modified organisms, which have attracted a fair amount of controversy, the vectors’ transferred DNA will eventually be eliminated during allele separation in the next generations. Thus, any crop mutation generated in this way is no different from crop mutations occurring naturally or induced via mutagens.

The advantage of genome editing is that new crops obtained this way may not have to be subjected to the strict regulatory constraints implemented for genetically modified organisms. This is the case in the U.S., where authorities already declared that these crops do not fall in the GM category, although the EU is still debating the issue. In addition, the time required to obtain a new, improved variety is considerably shorter than with traditional breeding or even genetic engineering.

Powerful tools
The most used tools in genome editing are zinc finger nucleases (ZFNs), transcription activator-like effector nucleases (TALENs), and clustered regularly interspaced short palindromic repeats (CRISPRs). These are all special combinations of species-specific DNA (or RNA in the case of CRISPRs) and enzymes that can be used to edit instructions in gene sequences.

This idea began in the early 1990s when bacterial type II enzymes were first used to target a specific region within the genome. However, only in the last 5 years, tremendous breakthroughs have been achieved in this field. The application of this technology covers broad fields of research, from medicine to agronomy.

In 2007, Mario Capecchi, Sir Martin Evans, and Olivier Smithies won the Nobel Prize for Physiology or Medicine for safely applying targeted genome modifications in mice. Moreover, at Beckman Research Institute of the City of Hope National Medical Center in California (U.S.), a clinical trial showed that gene editing techniques can be safe and effective in humans. In a paper published in the New England Journal of Medicine in 2014 by Dr. Pablo Tebas and his team, ZFNs were used to target a gene in the immune cells of 12 people with HIV, thus increasing their resistance to the virus.

Researchers did not wait long to test these new powerful tools in the field of crop improvement. In March 2014, the Canadian company Cibus released the first commercial crop using genome editing, a herbicide-tolerant canola variety. Scientists at Rothamsted Research Institute (UK) developed a variety of wheat resistant to powdery mildew by disrupting the activity of six alleles of a resistance gene, all at the same time. 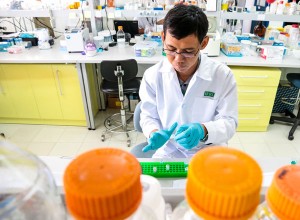 Dr. Rudi Trijatmiko, a project scientist at IRRI, is preparing a polymerase chain reaction to test whether the TALEN constructs have all the desired components. (Photo: Jec Narciso/IRRI)

Editing the rice genome
In the last 2 years, several research groups successfully tested the efficacy of genome editing tools in rice. With the sequencing of 3,000 genomes, recently achieved by the 3K Rice Genomes Project, the potential use of these tools becomes even more appealing. The search of DNA regions to be targeted within all these accessions is a milestone worth pursuing.

IRRI scientists are fully aware of these opportunities. And, several groups have started tapping into these innovative techniques. The detection of quantitative trait loci (QTLs) in rice breeding, one of the major research programs at IRRI, offers a direct advantage relevant to crop improvement. Dr. Tobias Kretzschmar, a molecular biologist in the Institute’s Plant Breeding, Genetics, and Biotechnology Division (PBGB), and his team are working on gene validation by looking at essential QTLs. By inducing targeted mutations, they are turning off specific genes in order to test their functions.
Meanwhile, Ricardo Oliva and his group from the Plant Pathology Department in the Crop and Environmental Sciences Division are studying genes with susceptibility to bacterial blight, one of the most serious rice diseases. It can cause yield loss up to 70% in susceptible varieties and the pathogens quickly adapt in resistant varieties as well.

“Broad-spectrum resistance can be created if several gene family members are targeted at the same time, limiting in this way the bacterium’s access to alternative nutrient sources,” said Dr. Oliva. “Whether we exploit the genes with resistance or susceptibility to broaden the spectrum of resistance, it is clear that genome editing tools are important assets for next-generation resistance breeding.”

In another project funded by the Global Rice Science Partnership New Frontiers Program, Dr. Inez Slamet-Loedin and Dr. Prabhjit Chadha-Mohanty in the PBGB are applying several genome editing tools to produce IR64 rice that is resistant to rice tungro spherical virus. They are working closely with Dr. Daniel Voytas from the University of Minnesota (U.S.), one of the leading pioneers of this technology.

“We are excited to see promising results being brought to life with these new tools,” said Dr. Slamet-Loedin.“The applicability is not restricted to just inducing mutations, but it can be expanded to allow multiple genes to be stacked at a single locus, though there is still much to learn.”

And yes, there is still a lot to learn for rice scientists since the applications of genome editing are still in the early stages. Nonetheless, targeted manipulation of genes for desirable agronomic traits can potentially revolutionize how new rice varieties will be bred. Genome editing techniques promise to improve the disease resistance and nutritional value of rice. These techniques could also produce crops that require fewer inputs and that could thrive under unfavorable conditions. Genome editing could be another major tool in the race to feed the ever-increasing population of the world.

Dr. Macovei is a postdoctoral fellow at PGBB at IRRI. She is involved in a project designed to test the genome editing tools in rice, under the supervision of  Dr. Inez Slamet-Loedin and Dr. Prabhjit Chadha-Mohanty.