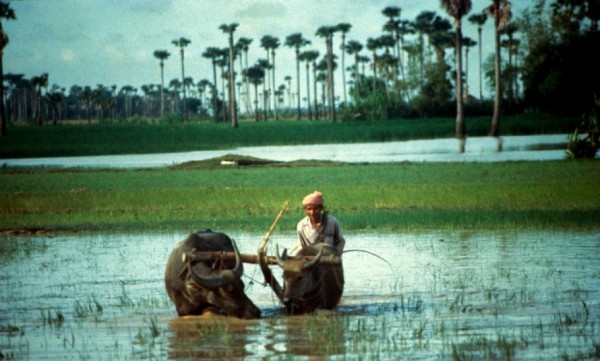 Cambodia’s resurgence in the 1990s, following a couple of troubling decades of war and internal strife, was a transformation that saw its economy rise hand in hand with productivity in its agricultural sector.

Cambodia’s economy is now largely driven by agriculture—a sector that is dominated by rice. According to a 2011 International Food Policy Research Institute (IFPRI) report, between 2000 and 2008, when the country’s agricultural sector consistently grew at an average of 5.6% every year, the country’s economy was also registering an impressive 9.8% growth.

Rice in Cambodia
Rice-based farming has existed in Cambodia for around 2,000 years. Eighty percent of its farmers grow rice, which is planted on about 80% of the total cultivated land in the country.

Back in the game
After a 30-year hiatus, Cambodia’s exports were reinvigorated to an estimated 800,000-ton increase from the early 2000s to 2010. This was after Cambodia’s rice production increased steadily by 9% annually in that decade. This change came as its government paid special attention to rice after recognizing its strong role in the agricultural sector, which employs more than half of Cambodia’s labor force.

The government is prioritizing yield improvement through intensification, and the country has opportunities to dedicate more land to rice production and improve irrigation.

Use of a combine harvester helps farmers harvest the crop on time, with less labor, and at less cost. (Photo: Trina Leah Mendoza)

The International Rice Research Institute (IRRI) played a key role in Cambodia’s rice renaissance. After the Khmer Rouge regime of the late 1970s, the country lost almost all its traditional rice varieties because farmers were unable to plant rice; thus, they resorted to eating their rice seed instead of sowing it.

IRRI, which has in its International Rice Genebank duplicates of 766 traditional Cambodian rice varieties, replenished this lost rice by multiplying the conserved rice and repatriating it back to Cambodia between 1981 and 1990.

IRRI and Cambodia’s relationship, however, can be traced back a decade earlier. Six Cambodian scientists were trained at IRRI between 1960 and 1973, and IRRI had collected traditional rice varieties for conservation in

By 1985, the Cambodian government, through the Cambodian Ministry of Agriculture, Forestry, and Fisheries, asked IRRI to assist the country in developing its rice research system. Progress in research and institutional development soon occurred, and eventually improved rice-based farming systems in Cambodia. An IRRI mission to Cambodia in January 1986 identified potential areas of cooperation and aid, and a memorandum of understanding for collaboration was signed between the two partners in July of the same year.

A significant collaboration between IRRI and Cambodia lasted 15 years (1987-2002). The Australian Agency for International Development financially supported this collaborative effort, known as the “Cambodia-IRRI-Australia Project,” and nine IRRI staff members were posted in Cambodia to work on this project.

This relationship was further strengthened in 2000 when Cambodian Prime Minister Samdech Hun Sen visited IRRI headquarters in the Philippines, and in 2007 when the country’s agriculture minister presented the Royal Government of Cambodia’s Sahametrei Medal to former IRRI Directors General M.S. Swaminathan and Ronald Cantrell, to recognize IRRI’s contributions in reviving and developing the country’s rice research system.

IRRI’s postharvest experts have been working with Cambodian partners in capacity building for researchers and farmer intermediaries to overcome high postharvest losses and the lack of postharvest experts in the country. Also, through the Irrigated Rice Research Consortium, innovation platforms are developed to bring together stakeholders in research and extension to make sure that more people adopt sustainable technologies.

Another IRRI project in Cambodia is the Green Super Rice project, which aims to develop “green super rice” varieties that are adapted to difficult growing conditions, such as drought and low inputs, no pesticide, and less fertilizer. Moreover, these varieties can grow fast to out-compete weeds, thus reducing the need for herbicides.

The Consortium for Unfavorable Rice Environments also leads research activities together with local government units and non-government organizations to disseminate technologies that help improve the production and livelihood of Cambodian rice farmers, especially those whose lands are less suited to rice production.

IRRI works closely with the country in supporting its next generation of rice experts. As of May 2012, 257 scholars and trainees from Cambodia had gone through IRRI’s training courses and graduate study research work.

Continually working together with Cambodia through various rice related projects and programs, IRRI hopes to further contribute significantly to the development of Cambodia’s rice industry as the country aims to become one of the largest rice-exporting countries in the world.