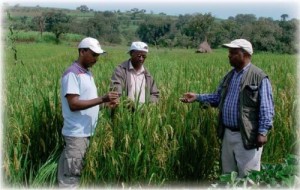 The authors (from left to right, Dr. Zenna, Mr. Gebre-Tsadik, and Dr. Berhe) inspect rice plants in Chewaka, one of the best riceproducing areas in Ethiopia. (Photo: Birhane Gobezai)

Agreeable weather conditions make the mid to high altitudes the predominant locations for human settlement and crop production. Consequently, population pressure and an archaic farming system at these altitudes have caused tremendous ecosystem degradation in the form of soil erosion and declining soil fertility. This situation, together with the Rift Valley’s typically erratic climate, means that prolonged cold and dry spells are challenging the country’s ability to achieve food self-sufficiency (producing enough food) and food security (ensuring that everyone has access to sufficient food).

Rice was introduced to Ethiopia in the 1970s and has since been cultivated in small pockets of the country. It is a staple food in the country’s east, where rice is imported through Somalia on the black market. Recent surges in demand, especially from city dwellers, are forcing the government to spend large amounts of money on importing rice.

The rice production system in the country has focused mainly on the introduction of improved varieties from a range of different sources, including the International Rice Research Institute (IRRI), the Africa Rice Center (WARDA), Guinea, and Madagascar. Federal and regional research centers are concentrating on the evaluation and release of new varieties for local producers. Three improved irrigated varieties from IRRI and four “New Rice for Africa” (NERICA) varieties from WARDA were released to farmers in 2005-07. In farmers’ fields, the NERICA varieties—grown in the rainfed uplands, where farmers do not have access to irrigation systems—registered yields of 3–6 tons per hectare. The IRRI varieties, grown in lowland irrigated conditions, achieved 6–8 tons per hectare.

The Sasakawa Africa Association (SAA) through its Sasakawa Global 2000 (SG2000) program has played a key role in promoting NERICA and other cultivated varieties to the country. In addition, the Japan International Cooperation Agency (JICA) and SAA have supported the introduction of essential postharvest (storing, milling, drying) technologies and processing machinery to rice-producing areas.

The recent surge in demand for rice combined with the skyrocketing import price challenged the country’s policymakers to seriously consider the country’s potential to grow the grain for itself. Subsequently, successful lobbying has pushed rice to be classified as a fourth “National Food Security Crop” after wheat, maize, and the country’s traditional staple cereal crop, tef. This move favors rice research and promotion on a larger scale. A national workshop was held on 21 August 2007 in the Ethiopian capital, Addis Ababa, where the National Rice Promotion Committee was formed, to facilitate the establishment of the National Rice Research and Development Steering Committee.

However, if rice is to contribute to the nation’s food security, it must be grown on a larger scale in ecosystems not already devoted to traditional or cash crops preferred by local farmers. Fortunately, the country has more than 13 million hectares of waterlogged black-clay soil (known as vertisol) in the  mid and high altitudes. Much of this land is occupied by resource-poor subsistence farmers for whom growing rice presents good opportunities to supplement their current meager income.

The waterlogged nature of the soil and the characteristic cold climate of high altitudes are the major constraints to crop production in these areas. Nevertheless, rice grows well in waterlogged conditions and rice varieties exist that can grow at high altitudes in cold weather. Preliminary evaluation of a selection of local varieties revealed good vegetative growth but low night temperatures meant that most of the cultivars remained sterile or required a prolonged harvest time.

Despite these early setbacks, the accessibility of many samples of cold-tolerant rice in IRRI’s International Rice Genebank and the large area of available fertile land mean that Ethiopia has great potential to become a major rice-producing country. Recognizing this opportunity, Tareke Berhe, director of SAA’s regional rice program, has initiated a project to evaluate cold tolerance in rice.

The project aims to develop rice varieties that can be grown by small-scale farmers in cool-climate elevated areas. Success would create a huge opportunity to support a large number of resource-poor farmers and contribute to Ethiopia’s food security.

With assistance from IRRI Rice Breeder for Africa Glenn Gregorio, Dr. Berhe obtained 130 rice varieties from the International Network for the Genetic Evaluation of Rice (INGER), as well as six lines from Madagascar. Negussie Shoatatek Zenna, postdoctoral fellow at SAA and a former IRRI Ph.D. scholar, is currently evaluating these lines in four locations at 1,860, 2,260, and 2,400 meters above sea level. So far, about 40 of the lines have shown promising growth at the different sites.

A similar initiative led by IRRI and WARDA, which aims to develop climate-hardy rice tailored to a number of rice-producing countries, including Ethiopia, is set to begin with financial support from the Bill & Melinda Gates Foundation.

As rice production takes off in Ethiopia, participation and support from international organizations such as IRRI, WARDA, SAA, JICA, and others is crucial. This is especially so in such areas as seed multiplication of selected varieties, evaluation of rice germplasm (seeds and the genetic material they contain) for specifi c traits, the introduction of rice-production and postharvest technologies, training of rice breeders, and developing and lobbying for effective agricultural policies. With such support, rice production in Ethiopia has a chance to bring a long-awaited Green Revolution and, with it, the plentiful and affordable food that the country needs.