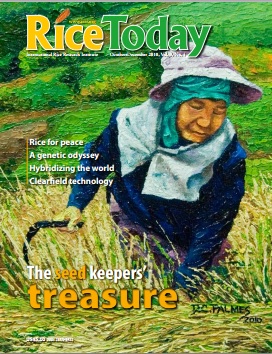 This reproduction of an oil-on-canvas painting by Filipino artist-photographer Dante Palmes depicts the upland rice harvest near Chiang Mai,Thailand. It is based on a photo the artist took himself while on assignment for Rice Today to illustrate Winning the upland poverty war on pages 14-18 of Vol. 9, No. 1.

On 27 September 2010 in New York City, the International Rice Research Institute (IRRI), the Asia Society, and the Ford and Rockefeller Foundations held a special dinner and symposium to recognize and celebrate the 50th anniversary of IRRI and one of the most important philanthropic initiatives in Asia during the 20th century.

Founded in 1960 by the Rockefeller and Ford Foundations, IRRI played a critical role in advancing the Green Revolution in the Asian region. The increases in agricultural production that followed and the abundance of affordable rice that became available to millions of people helped lay the foundation for a period of unprecedented economic growth throughout Asia that has lifted more people out of poverty than at any other time in modern history.

At the same time, IRRI and the Asia Society released a new and significant report on Food Security and Sustainability in Asia, prepared by a joint task force cochaired by Dan Glickman, former U.S. secretary of agriculture, and Dr. M.S. Swaminathan, India’s leading food security expert (and former IRRI director general). The report examines the multiple factors contributing to Asia’s growing food insecurity and lays out a strategy for the future that emphasizes the critical importance of rice as a source of nutrition, livelihood, and environmental sustainability. With Harvard economist and Asian food security expert Dr. C. Peter Timmer as the lead author, the report will be released across Asia over the next few months, including a special event at the International Rice Congress in Hanoi on 9 November. 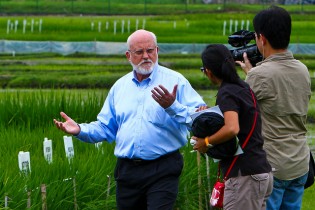 Dr.Robert ”Bob” Zeigler is the director general of IRRI.

In this report, the authors note that food security in Asia is currently facing serious problems—more than half a billion inhabitants of the region go hungry each day. The future seems even more daunting—population growth, dwindling land and water resources for agriculture, and huge uncertainties from climate change present scientists and policymakers with additional challenges. Moreover, the report states that, traditionally, improvements in rice technology and in farm productivity have been the main avenues to overcome problems related to food security. Indeed, rice availability and food security have long been synonymous in Asia, especially in the political arena. Despite rapid economic growth, sharply reduced poverty, and extensive diversification of the typical Asian diet, the dominance of rice remains a reality in the region’s food security. As such, the task force’s report focuses on the role of rice in sustaining Asia’s food security and aims to provide a thorough assessment of the potential for continuing gains in rice productivity.

It’s very clear that rice will remain fundamental to the region’s growth, prosperity, and stability for the foreseeable future. At IRRI, we believe that it is imperative to encourage a new generation of philanthropy in Asia that supports rice science and innovation for the benefit of the entire region. Indeed, in keeping with the recommendations of this report, IRRI has organized a 50th anniversary fund-raising campaign to convince today’s Asian philanthropists to invest in this vital work. For more on the IRRI campaign and its philanthropic initiatives in Asia, please visit The IRRI Fund. For those in the United States, you can visit Give2Asia, where the IRRI campaign is displayed prominently.

I encourage you to spread the word about these important activities and I look forward to your continued interest in, and support for, international rice research.