Thanks to crop insurance and climate-smart rice varieties, smallholder farmers in Odisha enjoy some protection from the financial risks posed by extreme weather events. 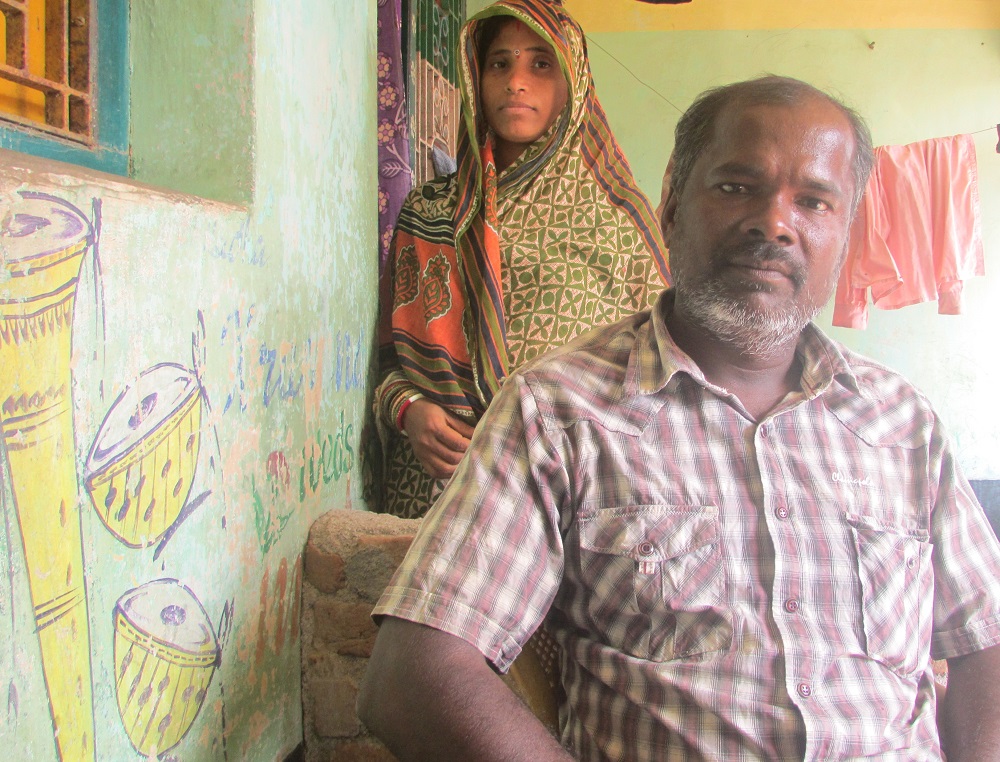 By insuring their farmland, Mr. Swain and his wife, Mahalaxmi, were able to recover from crop losses caused by insect pests. Without it, smallholder farmers like them would be unable to repay their loans and provide for their families. (Photo: IRRI India)

Dwitikrushna Swain, 42, along with other marginal farmers from Gunthapada and neighboring villages in Aska Block of Ganjam District in Odisha attended a farmers’ orientation program in 2019. Through the program, the farmers learned about some options to mitigate climate risks to agriculture, specifically, the importance of Pradhan Mantri Fasal Bima Yojana (PMFBY) crop insurance and using stress-tolerant rice varieties (STRV) for areas prone to climate fluctuations.

A safety net for farmers
Mr. Swain owns about half a hectare of farmland and cultivates another 1.2 hectares under a sharecropping contract. During the previous kharif, brown planthopper (locally called chakada) infestation caused major crop losses. Mr Swain was not spared and a major portion of his crops had been damaged by the pest attack.

He said that agriculture officers conducted a crop cutting experiment in the affected area and found that most of the farmers from their gram panchayat (the local administrative village-level self-governance system in India) faced major losses due to pest attack. Fortunately, he and some other farmers had a safety net to bail them out of distress.

After attending the program conducted by the International Rice Research Institute, he decided to insure his farm under PMFBY.

“I took a loan of around USD 500.00,” he said.  He used the money to invest in his farm which included crop insurance.

As the panchayat was notified under the crop loss category, Mr. Swain and other farmers who had availed of the insurance received payouts from PMFBY.

“I received USD 360.00 from my insurance,” he said with a smile. “It helped me recover from the crop losses. I would have been worried about how I would repay my loan and feed my family had I not insured my farmland.”

The following season, around 12 farmers in his village took crop insurance, convinced and inspired by Mr. Swain’s experience.

Raising the awareness level
“Due to lack of awareness many farmers do not insure their land before cultivation,” said Mr. Swain.

Because of the low literacy rate among farmers, IRRI used a short film on PMFBY that was quite effective in communicating the message to the farmers. An animated mobile app was also designed to give farmers a virtual experience in different situations under which crop insurance and STRVs can help farmers comprehend the relative benefits and make meaningful decisions.

Mr.  Badatya and his wife Purnabasi are shareholders who receive a coupon for STRV seeds. The coupons are offered  to participants at the farmers’ crop insurance orientation program. (Photo: IRRI India)

.
Benudhar Mishra from Survey Jena, a non-governmental organization for agricultural and rural development, led this orientation under the guidance of IRRI.

Mr. Mishra noted that the participating farmers were encouraged to avail of the subsidized crop insurance and STRV coupons and experience the associated benefits.

Insurance claims triggers
“A farmer can claim his insurance payout to compensate for yield loss in three different cases,” Mr. Mishra explained. “He is eligible to 25% of the claim amount if he was prevented from sowing his crops due to natural hazards. For standing crop losses, he will receive a payment if an assessment based on crop cutting experiment shows that the loss is calculated at more than 30% compared to the previous five years. For postharvest crop losses, the farmer has to inform the agricultural department within three days of damage. He is eligible to get the claim amount after a physical assessment of the damaged plot by the agriculture officers.”

Weaknesses in the insurance system
However, there are some challenges in this system. In Odisha, due to a lack of written or legal documents between landowners and sharecroppers, the latter face difficulties in obtaining loans and crop insurance. Mr. Swain could have received a bigger payout had he insured the crops under sharecropping agreement if he was able to submit required documents since he is not the owner of the land.

Sahadev Badatya, 60, a farmer from Gunthapada who attended the orientation program in Kabisurjya Nagar Block, cultivates rice on almost 1 ha of land as a sharecropper.

“The crop insurance scheme is helpful for marginal farmers,” Mr. Badatya said. “But I cultivate rented land so I cannot insure under the scheme and my landowner is not willing”. 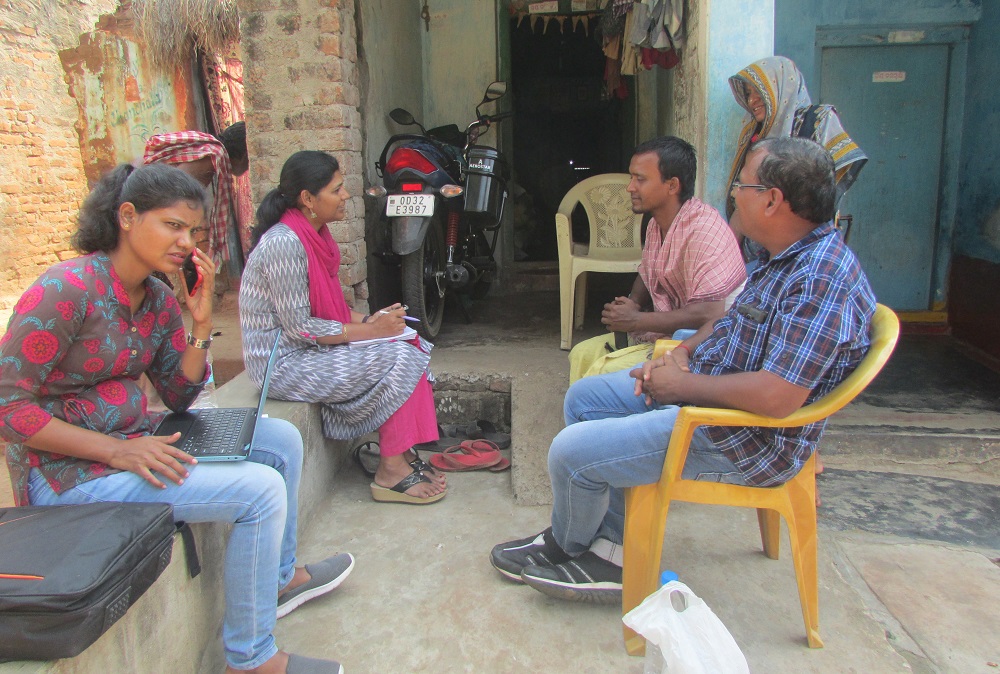 .
Nanda Kishore Jena, 32 is another sharecropper who cultivates almost 2 ha of land which he rents from the landowner every kharif season. He heard about crop insurance from the farmers who attended awareness training and, although interested in crop insurance, also can’t avail of this facility due to lack of land ownership.

“This is a matter of mutual trust between the landowner and sharecropper,” said Mr. Jena. “ If we ask for any document, they will deny and immediately handover the land to another sharecropper for cultivation. We will lose our livelihood. Because many sharecroppers in this village couldn’t overcome their crop loss, they migrated to nearby cities to work as construction laborers.”

Shamuka Shefali, an animator at Survey Jena who created the mobile app, noted another flaw in the system.

“If the sharecropper faces any loss, he or she has no way to recover,” Mr. Shefali said. “If after an assessment the panchayat qualifies under crop loss category, it’s the landowner that gets the compensation and not the sharecropper. It keeps sharecroppers out of the purview of the Prime Minister crop insurance scheme as well.”

In addition, crop damages caused by other factors are not covered by the insurance.

“Sometimes farmers face crop loss due to wild animals such as elephants, bears, and monkeys,” said Mr. Saheb Swain, a former village-level worker in Gunthapada Village said. “These also need to be included in the crop insurance scheme.”

Institutionalizing insurance protection
IRRI scientists are studying the outcomes of the educational training programs on farmer knowledge and adoption of technical and other options which ultimately impact farmers’ income and livelihoods. The insights from the farmers and stakeholders will be discussed with policymakers to explore how such programs can become part of regular government programs.