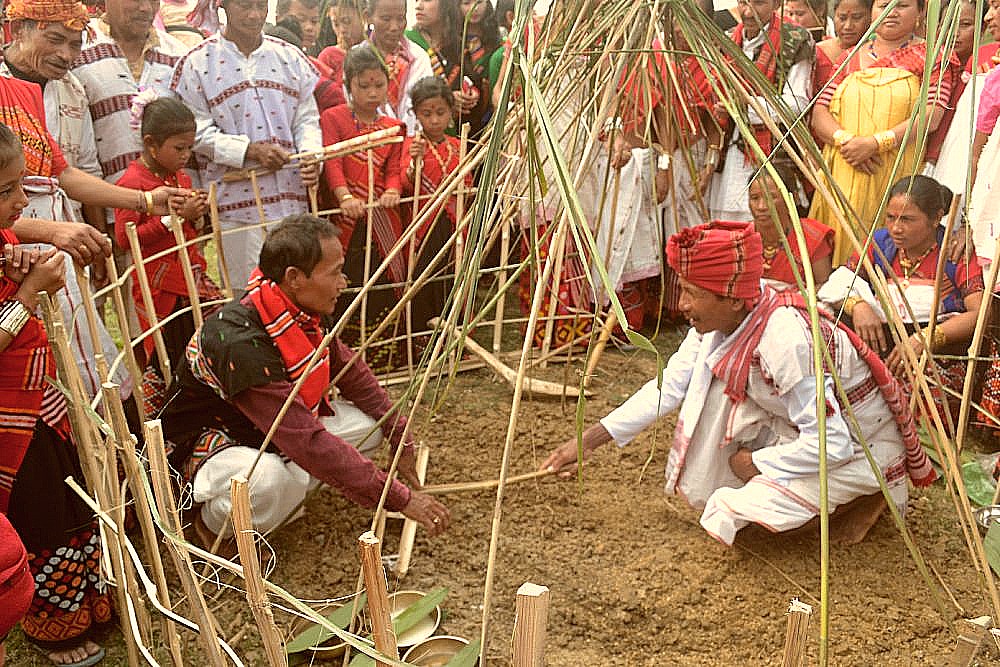 During the AliAye Ligang festivities, the soil is symbolically ploughed with traditional tools for the plantation of sacred grains. (Photo by: M Basu)

“Aali a:ye li’gang a: dubo:ne, Bi’rdug apun pundubo:ne” (Our festival of AliAye Ligang has arrived, flowers of spring are in full bloom). Traditional refrains, sung to the beats of drums and dance reverberate across the banks of River Brahmaputraand its tributaries in Assam, India. People from the predominantly indigenous Mising community, who have lived along these river banks for generations, are welcoming the year’s first paddy sowing season. Women dressed in flamboyant hand-woven “ege gasor” (two-piece traditional attire) perform the Gumrag dance, their sways and movements depicting paddy sowing and harvest.

Agriculture is the major livelihood for the community here. Bogaram Bori, an elder from the village of Nikori, explainsthat the festival’s name– “Ali Aye Ligang”– implies food security. Ali means seeds/legumes; Aye , refers to fruits; and Ligang is to sow. The festival is an invocation to Mother Nature during spring.

“We pray to her to bestow the soil with abundant fertility for bountiful crops and harvest,” he says.

However, in recent years their rituals and prayers have often been disrupted by unexpected and untimely heavy rains causing sudden flash floods, erosion, or sand deposition that damage crops and jeopardize food security.

“Earlier rains usedto be mostly from April to May and this gave us enough time to prepare our soil and seed beds for monsoon paddy transplantation. But now our agriculture is getting more and more uncertain,” says Mahan Chandra Borah, an indigenousfarmer from Melangekath village in the Jorhat District.

Farmers from Melangekath lament the mono-cropping of paddy using high-yielding variety (HYV) seeds. These new seeds began to be used in India after the Green Revolution during the 1960s with the aim of increasing food production. But farmers New Internationalist spoke to in Assam say the seeds are unable to cope with today’s climate vagaries and stress, resulting in crop failures and declining yields.Their losses are further aggravated by the soaring costs of seeds, chemical fertilizers, pesticides, and setting up the necessary irrigation facilities. Many farmers also say that the constant use of chemicals has steadily degraded the soil and biodiversity of their rice fields.

Turning to “Folk Rice”
To try and redress the balance Mahan and his fellow farmers are gradually reverting back to the traditional wisdom of their ancestors, who cultivated indigenous paddy seeds.

These Folk Rice Varieties (FRVs) of paddy, unlike the HYV, can be farmed using organic or naturally occurring manure and pesticides. Many of them have the inherent capacity to suppress weeds and their seeds can be preserved for years, all of which reduce the input costs of their cultivation. Therefore, even if FRVs produce comparatively less than HYVs, the yield is much more stable and assured which, put together with its low cultivation costs, prove to be more economically viable for the farmers.

Although Assam has traditionally been home to a diversity of native paddy, due to the varying agro-climatic conditions along the Brahmaputra valley, they had been gradually losing out to HYV seeds. But Mahan, and other farmers, are conserving a diverse range of indigenous seeds to help them better deal with climate changes. Some varieties are more able to survive floods, there are some that do not require much water to grow and are drought-tolerant and others are resistant to local pests.

Around 10 years ago Mahan set up the Annapurna Seed Lending Library in his home village of Melengkath–the only one of its kind in northeast India. The library stores a range of FRVs well-suited to the various regions of Brahmaputra valley. Some of them also have medicinal qualities. It lends farmers enough seeds so that they can grow the native paddy type in their fi elds as well as save some of the next generation for future use. Farmers return borrowed seeds back to the library, from their new collection, so that they can be used by others.

“I began by collecting three to four heirloom (native) seeds in 2010-11, but today we have over 300 different categories. We scouted for them mostly from elder farmers still practicing traditional cropping patterns in the state or outside besides paddy seed conservationists,” says Mahan.

Certain FRVs, such as guni, fapori, kola ahu, and bengana ahu are particularly suited for the upland regions of Brahmaputra Valley. They mature fast within 90 to 120 days, do not require much land tillage or water, and are drought-tolerant. Fapori also has the characteristic of suppressing weeds as it grows in the field.

Another unique indigenous variety is the baw or deep-water paddy, which is flood-tolerant. Their plants get taller and taller, keeping pace with the rising level of floodwater reaching up to 10 to 12 feet in height. Their strong roots can withstand the powerful currents of floodwater.

Today, Mahan and his Annapurna Seed Library work with over 1,500 farmers across 80 villages in nine districts of Assam,who are reverting back to the cultivation of native paddy in their land. Mahan has become a champion of sustainable, climate-friendly farming and promotes seed saving to young people through regular classes. He works with nonprofits including the Assam-based Balipara Foundation, California-based Richmond Grows Seed Lending Library,  and Fertile Ground in Canada, to further his cause and spread awareness.

He even received the Plant Genome Saviour Award in October 2019 in recognition of his work.

The North-East Affected Area Development Society (NEADS), an Assam-based nonprofit, works with farmers like Mahan to promote the revival and cultivation of traditional paddy seeds in climate change hit villages.

“We are encouraging farmers to set up seed banks in their villages to develop seed ownership or seed sovereignty. This will empower them to grow their own crops in their own fields, as means of food security, even at the time of crisis,” says Girin Chetia, Director, NEADS.

One challenge is to identify which seeds will be able to survive for an extended period in the seed bank while keeping all the intrinsic traits intact. And that’s where local knowledge comes in.

“The skill has been passed on to us by our mothers and grandmothers. It enables us to select the appropriate seeds on the basis of their density, weight, and other morphological characteristics,” says Dipti Boruah, who manages the Annobrahma Seed Bank, alongside a group of other women in the village of Pirakotaher.

Anu Gogoi, another Annobrahma organizer says that “while indigenous paddy seeds can be easily conserved for life with such simple indigenous techniques, the hybrid seeds are found to lose their efficacy and characteristics in the very next season, hence need to be purchased every year, adding to the financial burden of the farmers.”

Going chemical-free
Over the winter, when the weather conditions are less volatile, NEADS also promotes organic agriculture in at least 40 villages of Golaghat. Traditional farmers like Mahan Chandra Borah were brought in to train people on environmentally-friendly and organic cultivation prior to the first round of floods.

“Most farmers rear livestock in their homes. Hence dung and cow urine are easily available to them which make good fertilizers. Further concoctions of organic wastes from their kitchen and home, leaves of basil, neem, papaya, chilli, and garlic make cost-effective and strong pest repellants,” says Mahan. The villagers claim that reverting back to organic farming from chemically grown crops, has reduced their input costs by more than 50%.

“The ingredients used in the making of organic fertilizers and pesticides are all naturally available from our homes and villages,” says Dilip Paw.

But what really pleases Niranjan Kolita, a farmer from Bejorsiga Village, is to see his 0.2 hectares of agricultural field coming back to life again with butterflies, bees, insects, snails, dragonflies, owls, sparrows. “These maintain the natural food chain in my field, improving soil health and productivity,” he says.

Prepared for the worst
Climate uncertainties are also bringing together indigenous farmers and their families to save up their surplus food grains in case of a future crisis. In some parts of Assam indigenous communities get together to stock their surplus rice in a village granary. This is so they can help each other during a crisis. This system, called “kongali bhoral” acts as a unique collective disaster preparedness mechanism-“kongali” means poverty and “bhoral” refers to grain house.

Rice is the mainstay of Assam’s economy and principal food of the villagers. These community grain houses are either built on raised land or on stilts for flood resilience and are mostly managed by women’s self-help groups (SHGs). The idea was developed in 2006 by Girin Chetia, a social reformer and director at NEADS. As agriculture was becoming more and more uncertain due to impacts of climate change, poor farmers were increasingly falling prey to moneylenders.

“When crops failed, the farmers invariably took loans charged at high interest to buy paddy to feed their families.This vicious cycle kept on piling up their debts, and to clear them they would either mortgage their meager assets or selloff their next harvest at an adiverse nominal price,” says Chetia. So, these grain banks were aimed at feeding the farmers during their times of kongali or abject poverty.

The first such kongali bhoral was formed in 2007, in Pirakota Village in the Jorhat District and it was run by an SHG called “Nabaratna Samanwaya Samitee” Now, there are about 20 kangali bhoral in the districts of Golaghat, Jorhat and Tinsukia.

Grain is lent to farmers on the condition that they return back the same quantity, with a little extra (as nominal interest mutually decided upon), after their harvest. This goes back to the granary, in case someone else needs it in the future.

What is happening in Assam emphasizes how indigenous people’s farming methods, using organic and traditional techniques, alongside native seed conservation, can help poor farmers better deal with climate uncertainties; and improve biodiversity and food security. NEADS and the farmers they work with argue that these are scalable techniques which can be replicated by communities facing similar crises elsewhere, alongside the wider action needed to address the climate crisis and ensure long-term security for farmers.

In the words of Girin Chetia: “When the community members are able to feed their families during their worst days, they emerge confident and much stronger to battle against both their poverty and impacts of climate.”