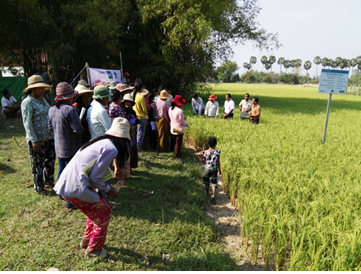 The variety, CAR15, was developed by the International Rice Research Institute (IRRI) and released in 2015 by the Cambodian Agricultural Research and Development Institute. It is adapted to the country’s rainfed lowland areas and has a potential yield of up to 7.4 tons per hectare. Rice farmers liked it because of its short maturity (90 days), long and slender grains, and resistance to brown planthopper and rice blast. It can also be planted throughout the year.

The Farmer’s Day, held on 16-17 February, were conducted by the Accelerating the Adoption of Stress-Tolerant Rice Varieties by Smallholder Farmers in Nepal and Cambodia (USAID-ASTV) project, an IRRI-led initiative funded by the Feed the Future Program of the United States Agency for International Development. Around 192 men and women farmers participated in the events.

The project is also promoting nine other rice varieties for farmers’ evaluation based on their preferences. Other breeding lines that are tolerant to flooding or drought are also currently being tested.

The Farmers’ Field Day was organized by the IRRI-Cambodia Office through Cambodia’s General Directorate of Agriculture.