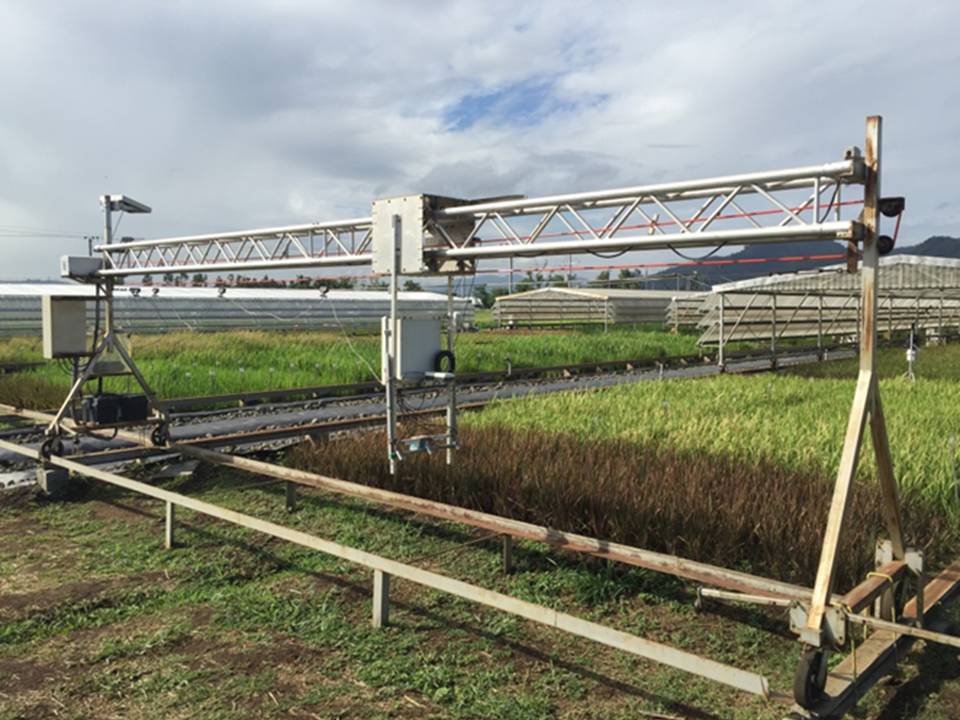 A foundation for improving rice production in the future lies in unlocking the diversity found within the International Rice Genebank. In 2014, the full genome sequence of 3,000 varieties was released in order to help unlock the secrets contained within. With access to the rice genetic code, breeders were offered the ability to rewrite it and produce new varieties fit for the future.

Unfortunately, a piece of the puzzle is still missing—scientists do not know what most of the code does. As a rough estimate, more than 70% of the 55,000 genes that make up the genetic code have no known function. What’s more, much of the diversity in rice results from the natural rewriting of this code. Altering just a single digit can change the entire function of a gene. To understand what happens when this occurs, scientists must measure the physical manifestation of the genes or phenotype.

Bridging the gap
Most breeders will tell you that measuring a phenotype, or phenotyping, is laborious, expensive, and, often, technically challenging. Take for example the measurement of yield for 3,000 rice varieties: a minimum of 1.1 million plants need to be grown and harvested across three separate seasons at one location. Understanding why variation occurred in yield would necessitate the measurement of a plethora of additional characteristics, many far beyond current scientific capabilities. As a result, it is rarely possible to measure phenotypes in detail on very large numbers of plants.

The emerging field of plant phenomics combines the disciplines of biology, engineering, and data analytics to offer a suite of new technologies to overcome what is known as the phenotyping bottleneck. It capitalizes on advances in imaging, sensing, spectroscopy, and robotics to noninvasively study plant growth, performance, and composition. It is exploratory research aimed at finding valuable new ways to phenotype. 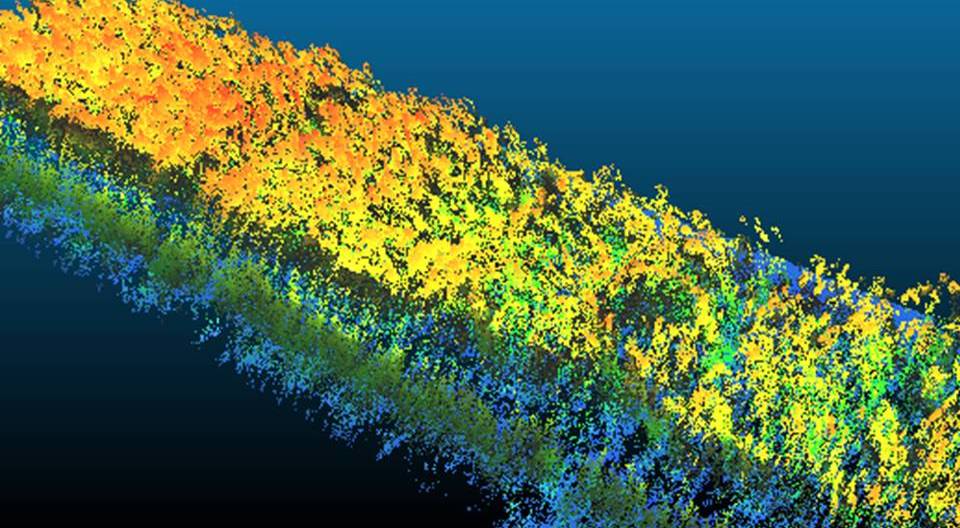 Digital agriculture
A cornerstone of phenomics is the ability to make noninvasive measurements of quantifiable plant phenotypes known as traits. A wide array of instruments for sensing and imaging is being tested at the International Rice Research Institute (IRRI) for this purpose. The most familiar of these are the RGB cameras capable of capturing color photographs; these images can be analyzed to obtain information about color, shape, and structure. Operating beyond the physical capabilities of the human eye, thermal-imaging cameras detect near-infrared radiation. More commonly used by firefighters, these cameras can distinguish objects within images based upon differences in their temperature. These cameras allow monitoring of plant responses to changes in the environment, such as the onset of drought. 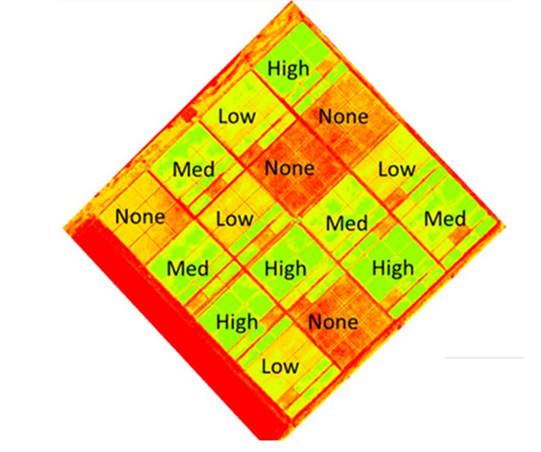 Various types of spectral imagers are being used to measure the reflectance of light from rice canopies. These have a unique signature related to their chemical and structural composition, for example, an abundance of green photosynthetic pigment chlorophyll. For probing physical properties, ultrasonic sensors transmitting high-frequency sound, optical sensors, or laser sensors are being used to measure distances, height, and structure. These allow plant architecture and growth to be monitored. In isolation, each sensor is a powerful tool. When combined, these create a toolkit capable of overcoming the phenotyping bottleneck. 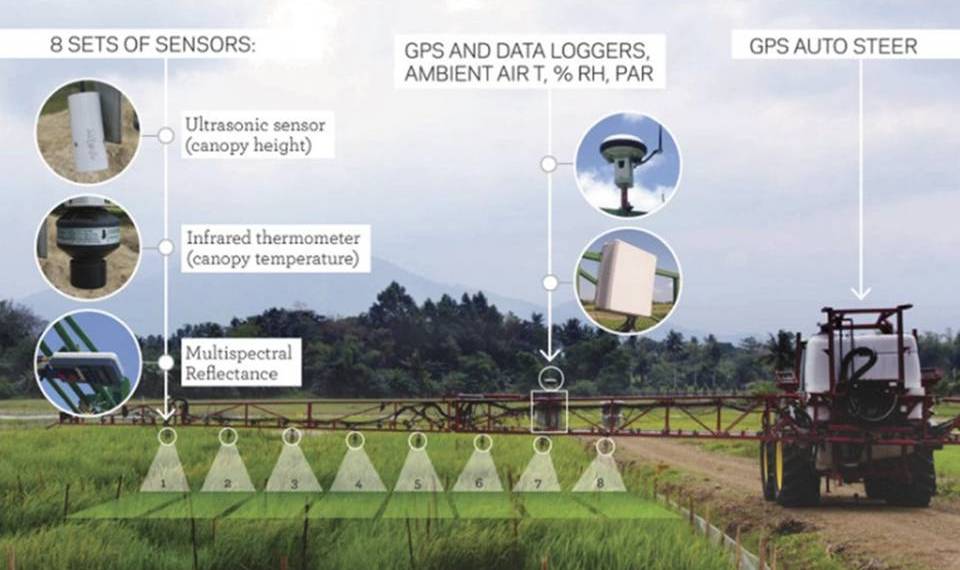 A tractor-based platform for field based phenomics. (Photo by S. Klassen, IRRI). 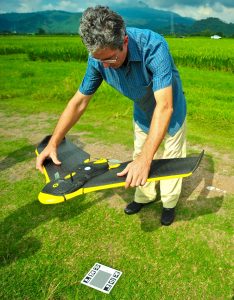 Rising to the challenge
With the right tools in place, the next challenge is to deploy them at scale. Over the past year, drones have appeared in the sky above IRRI headquarters in the Philippines. Drones provide an excellent means to collect data with which to sieve large collections of rice diversity for valuable traits. Fitted with RGB, spectral, and thermal-imaging sensors, the drone can collect data at the farm scale—measuring up to 100 hectares of rice in an hour. Cheap, fast, and highly mobile, drones have proven so successful that they will be deployed globally as part of the RICE–Global Rice Array, a network that brings together an international community of rice scientists to conduct a joint effort in enhancing the power of phenomics.

When working at the field scale, a GPS auto-steer tractor can be deployed. Eight sets of sensors are mounted on a 24-meter-long boom that sweeps over the canopy surface, collecting data as the tractor drives past. Moving at a speed of 1 kph, the system is capable of collecting canopy-level data on 2,500 plots per hour. Information from the onboard thermal, spectral, and ultrasonic sensors is used to perform digital 6 Rice Today July-September 2017 Rice Today July-September 2017 7 growth analysis and monitor the responses of plants to the field environment. This system builds upon technology developed for a rainout shelter rack, a sensor-based system used for nondestructive monitoring of drought physiological experiments in a hydraulically controlled field environment.

When more detail is required in order to dissect the mechanistic basis of a phenotype, the high-resolution phenotyping platform, built in conjunction with the High Resolution Plant Phenomics Centre at the Commonwealth Scientific and Industrial Research Organisation in Australia, is the tool of choice. Mounted on a gantry crane inside a screenhouse, this multi-sensor platform is capable of phenotyping 10,000 plants at the leaf level. Suitable for detailed trait dissection and probing dynamic responses, 3D images of plant canopies can be generated on which spatial data from color, thermal, and spectral sensors can be overlaid. By pushing the boundaries of innovation, this system aims to provide scientists with unprecedented amounts of detail and the ability to measure the components of complex traits such as photosynthetic efficiency and yield. 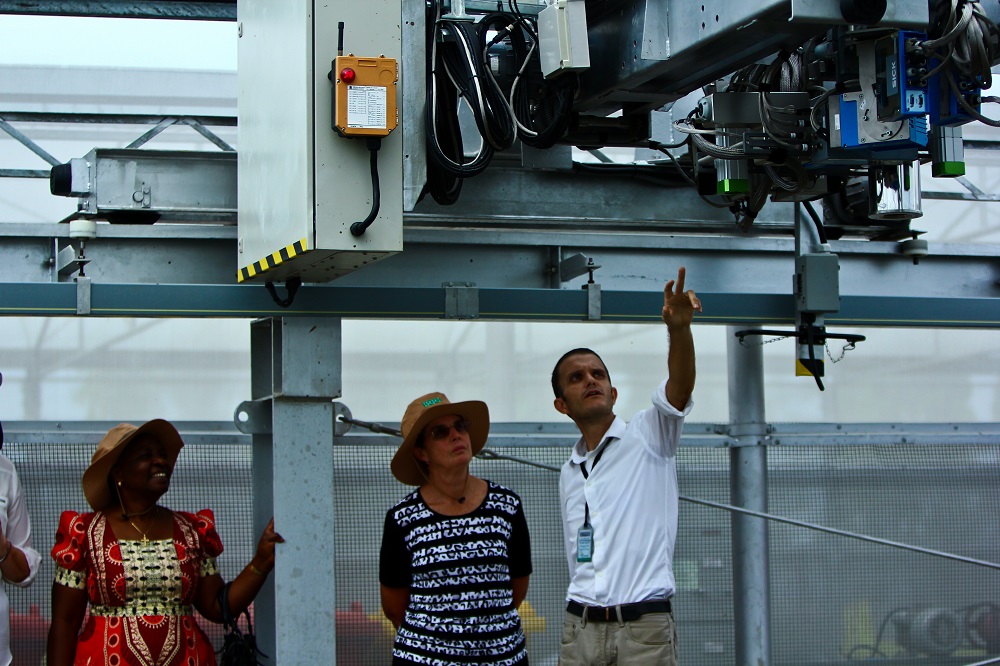 Dr. Robert Coe explains the high-resolution phenotyping platform to Drs. Bernadette Ndabikunze (right) and Kaye Basford, both members of the IRRI Board of Trustees. Equipped with multiple cameras and sensors, the high-resolution phenotyping platform collects plant growth, performance, and composition data as it sweeps over the rice canopy. It provides scientists the ability to collect unprecedented amounts of information from a single experiment. (Photo by Isagani Serrano, IRRI)

A window into the future
Phenomics is in a discovery phase; new technologies are being tested to see whether they are practical tools for phenotyping. IRRI is playing a key role in these innovations, investing in expertise and technologies that have led to significant increases in the number—and efficiency—of traits that can be measured. As the discipline develops, it will continue to redefine phenotyping capabilities. In this way, it will underpin the breeding of new rice varieties and drive improvements to rice production by enhancing the abilities of scientists and breeders to unlock rice genetic diversity.