Information has the power to help policymakers make better decisions. 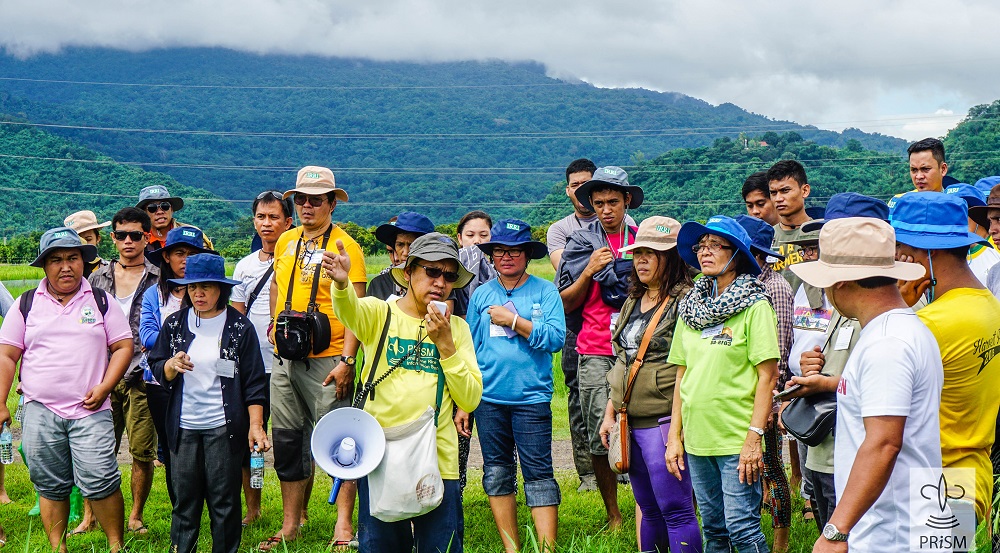 Information is power and, when it is in the hands of policymakers, better decisions can be made. Nowhere is this statement truer than in the collaborative monitoring and information system for rice production project of the Philippine Department of Agriculture (DA) and the International Rice Research Institute (IRRI).

Indeed, the power of accurate information is important, especially for a country that experiences an average of about 20 typhoons a year. In January 2017, the Philippine Rice Information System (PRISM) was tasked with assessing the extent of damage due to flooding and torrential rains that hammered Davao City in Mindanao in the southern part of the Philippines.

“We received a request from the DA for an assessment of flooded rice areas in Davao in January this year,” said PRISM project leader Alice Laborte. “We mapped all the flooded areas—not just the rice areas—in Davao and other parts of Mindanao where many locations were placed under a state of calamity.

“The beauty of this technology, which makes use of satellite imagery, is that we can quickly provide an assessment and estimate the extent of damage over a large area,” Dr. Laborte added. “One needs also to consider that, when there’s a calamity such as this, mobility for government workers is limited and accurate and timely assessments of damage are particularly challenging.” 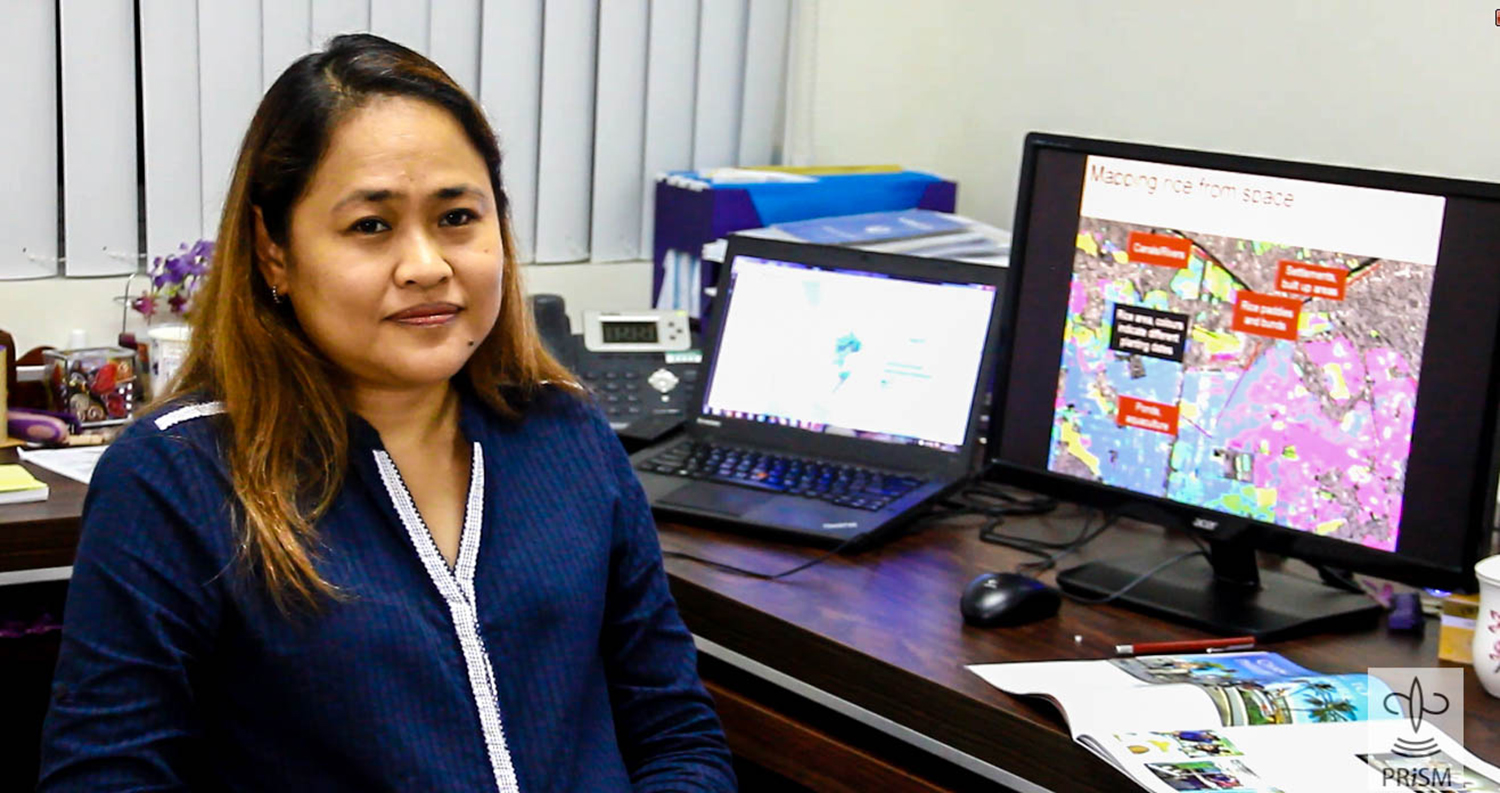 DR. LABORTE says PRISM can provide an accurate and timely estimate of damages over a large area when making assessments on the ground.

Dr. Laborte shared that, initially, rice areas in seven out of the country’s 18 regions were mapped during the wet season of 2014. By 2015, the project was already mapping rice areas in the entire country with an accuracy of more than 85%. Validation was done using field data collected by DA regional field officers with the aid of smartphones.

“The turnaround time for estimating rice areas is also quicker because we don’t have to wait to obtain data until the end of the season,” Dr. Laborte said. “We can also estimate rice area and yield at the municipal level, so the data are more specific than official statistics.”

She explained that the maps can even be more granular—at the barangay level (the smallest local government unit in the Philippines). However, we need accurate barangay maps to release reliable estimates at this level, according to Dr. Laborte.

Ready to go
At the end of this year, the entire operation of PRISM will be turned over to the DA through the Philippine Rice Research Institute (PhilRice) to ensure the continued operation of its system.

“The PRISM project will be owned and operated by the Department of Agriculture,” said Dr. Eduardo Jimmy Quilang, deputy executive director of PhilRice and PRISM project leader of PhilRice. “This year, we are in a transition period. We are now institutionalizing PRISM at PhilRice.”

“We have been working hand in hand with PhilRice during the research project phase of PRISM,” said Dr. Laborte. “PhilRice has been beefing up its infrastructure and setting up a separate PRISM unit with dedicated staff. This year, we are handing over the entire operation and moving from research to an operation mode.”

Dr. Laborte reported that they have invested a lot in building the capacity of their regional partners. Last year, the DA regional field officers participated in several training courses, including research data management, GIS, and crop health. Meanwhile, local government units joined a crop health training activity. This year, the field officers will be participating in an intermediate GIS training, which will allow them to use PRISM products in identifying problem areas and targeting possible interventions to increase rice yields.

We are seeing a growing interest in PRISM products and we would like planners and policymakers to use the information generated by PRISM when and where needed to make informed decisions, according to her.

“Besides assessing damages caused by flooding and drought, we receive other queries from the DA on whether we can estimate irrigated and rainfed rice areas, and also map other crops, such as maize and other high-value crops, across the country,” said Dr. Laborte. “We have to build the system incrementally. Now that we have developed and have gained confidence in our estimates for rice area, we can explore protocols for mapping other areas as a next step.” 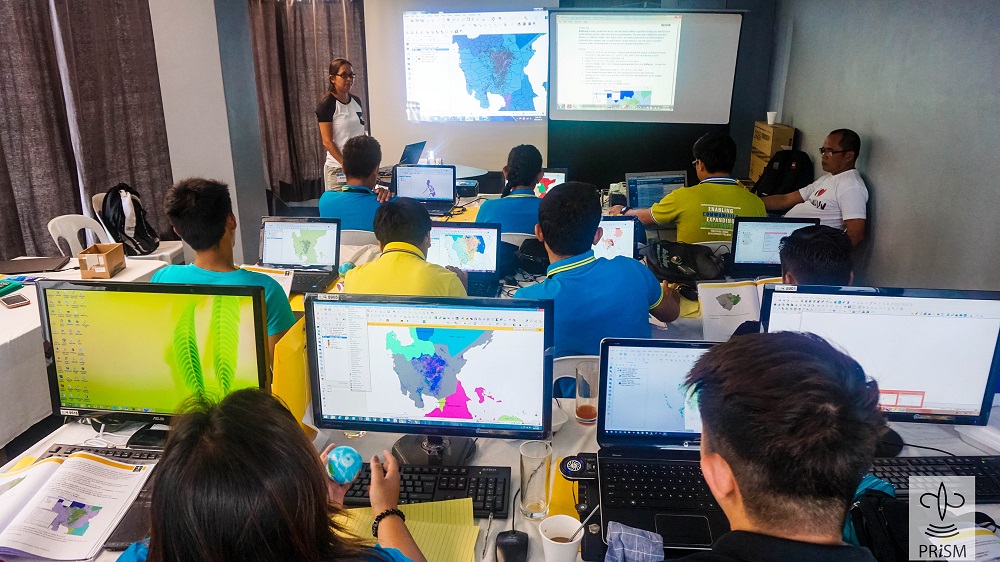 “The DA also wanted us to assess the damage caused by pests and diseases on rice,” explained Dr. Nancy Castilla, PRISM crop health specialist. “We proposed to focus on five pests and diseases initially for the Pest and Disease Risk Identification and Management (PRIME) project. These pests and diseases, such as blast, bacterial blight, rice tungro disease and its vector green leafhopper, brown planthopper, and rats, cause major losses in the Philippines. Like PRISM, PRIME will be funded by the DA-Bureau of Agricultural Research.”

“PRIME will build on the existing platform of PRISM and will integrate field-based pest surveillance and information derived from satellite and drone images to identify risk factors of pest and disease outbreaks, map potential outbreak risks, and identify appropriate management strategies and tactics to reduce crop losses,” Dr. Laborte said. “PRIME is expected to enhance the DA’s ability to reduce yield losses due to pests and diseases through better management and targeting of risk areas. The more data there are in both PRISM and PRIME, the more powerful our rice-based monitoring system becomes.”