A recent technology is giving rice scientists a new weapon for fighting the notorious brown planthoppers: a combination of genes 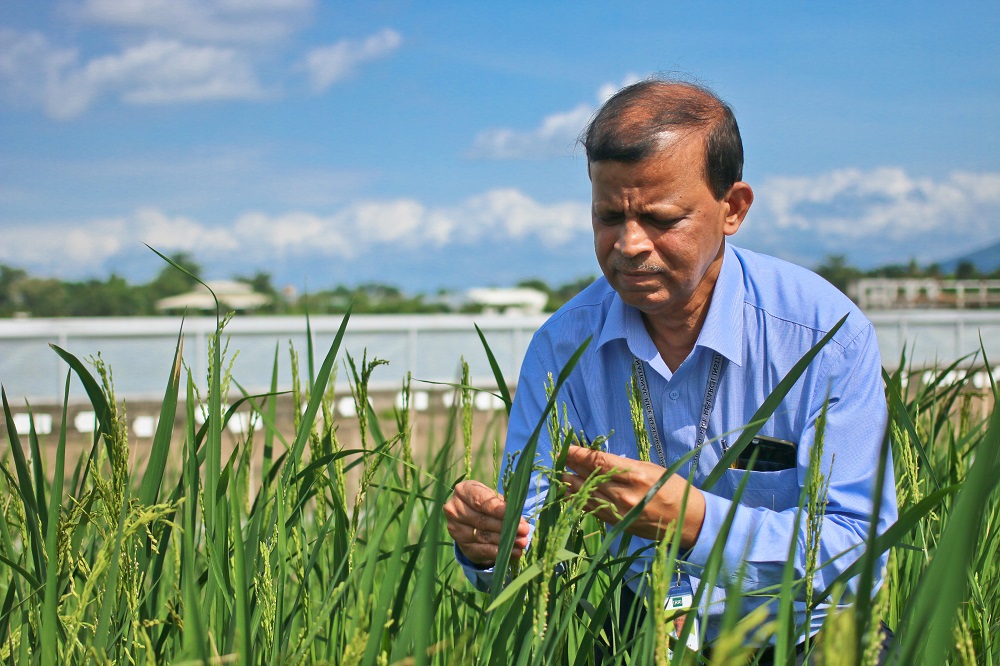 Through gene cloning, Dr. Jena works to identify the gene that enables a wild rice to fight off BPH and transfer the genes into cultivated rice varieties. (Photo by Isagani Serrano/IRRI)

The brown planthopper (Nilaparvata lugens) is an insidious insect with a massive appetite for destruction. These insects, also called BPH, attack in frighteningly large numbers and commence a feeding frenzy at the base of the rice plant. Hundreds of thousands of stylets—mouthparts designed for piercing tissues—suck out the sap that nourishes the plant.

Like wildfire
In their wake, the BPH leave their trademark “hopperburn,” so called because the rice leaves initially turn orange-yellow before the plants die. “It’s like wildfire has ravaged the rice field,” said Kshirod Jena, a plant breeder at the International Rice Research Institute (IRRI). “There’s no escape.”

BPH can also transmit the viruses that cause rice ragged stunt and rice grassy stunt, two incurable diseases that can finish off what the insects started. If any plants survive the initial onslaught, the plants infected by either virus are no longer productive.

The insects affect both tropical and temperate rice productions, causing severe yield losses worth hundreds of millions of dollars. Although these insects originate in the warm tropical zones of South and Southeast Asia, great swarms of BPH are carried by wind currents to great distances as far north as Japan and Korea.

“There are many insects that attack rice but the damages they cause are minor,” Dr. Jena said. “BPH can destroy whole fields. That’s why they are the number one enemy of rice farmers in Asian countries.”

The most extensive damages from BPH have occurred in India, Indonesia, the Philippines, Thailand, Vietnam, Japan, Korea, and Taiwan, with estimated annual losses of 2–3 million tons across the region. When rice farmers lose their entire crops to BPH, it sets off a Domino effect that could quickly lead to farmers sinking deeper in debt, followed by lean months and food insecurity, and foregoing health care and educational needs of family members. In a real sense, BPH can put the entire farming household in peril as well.

Plants vs. vampires
BPH have been aptly nicknamed the “vampire insects” for their manner of feeding. And, because the battle between the insects and their host plants have been going on for millions of years, their feeding mechanism has evolved into something that’s quite intricate.

“The insect uses its stylet to navigate through the spaces between cell layers until they reach the phloem cells,” said Dr. Jena. “Then it injects a vector effector protein. It’s like a killer protein. It dissolves the cell wall enabling the insect to suck the sap or phloem fluid, which transports the nutrients within the plant.”

The phloem fluid is analogous to blood in other organisms, hence the insect’s nickname.

But, the plants have developed their own elaborate protection system against insect attacks. Through the process of natural mutation, some plants have acquired the genetic component that enables them to secrete a substance called the receptor protein. The receptor protein neutralizes the harmful effect of the vector protein injected by the insects on the phloem cell wall. Thus, the receptor protein blocks the ability of BPH to feed, forcing them to find their meals elsewhere or starve to death.

Things became more complicated when farmers joined the “war” against BPH using pesticides as their weapons. The insects have an uncanny ability to quickly become resistant to the chemicals. Farmers invested heavily in pesticides that offered only short-term protection. To keep up with the insects, farmers started spraying more often and used higher concentrations. But the BPH kept bouncing back, flaunting their immunity and destroying rice fields.

The clone wars
Since the extensive use of pesticides is proving to be more harmful to the well-being of farmers and the environment than the actual target, IRRI has been working on host-plant resistance as an effective, environment-friendly approach to reducing insect damage and increasing rice yield.

“In the 1970s, IRRI has been utilizing the natural resistance of landraces and some wild rice to BPH in developing new varieties,” Dr. Jena said. “IRRI pioneered the research protecting rice against BPH. It’s called host-plant resistance breeding.”

Back then, scientists knew the BPH resistance genes exist. But they didn’t have the technology to definitively identify them. They discovered 30 genes linked to the plants’ resistance to the insects and labeled them Bph1, Bph2, Bph3, and so on.

It was only recently that researchers like Dr. Jena were able to isolate the actual genes and pinpoint their location in the rice chromosome.

Through the recently developed process known as gene cloning (not to be confused with creating carbon copies of whole organisms), they were able to study how these genes interact with the insects and fully understand the previously mentioned vector protein—receptor protein interaction.

“In gene cloning, we identified the resistance gene derived from a wild rice, Oryza australiensis” Dr. Jena explained. “We transferred the gene into a cultivated rice variety. Then we located the introduced gene in the rice chromosome 12 of the cultivated variety through gene mapping and confirmed that the gene is working.”

Gene cloning is a process that can take up to 5 years to complete.

Over the last six years, Chinese researchers have cloned four resistance genes while Japanese scientists have pinpointed a 5th gene found in cultivated rice. Researchers at IRRI have also identified new sources of resistance to recently evolved BPH populations in the Philippines.

The new resistance genes will be transferred into IRRI varieties to protect rice against aggressive BPH populations. 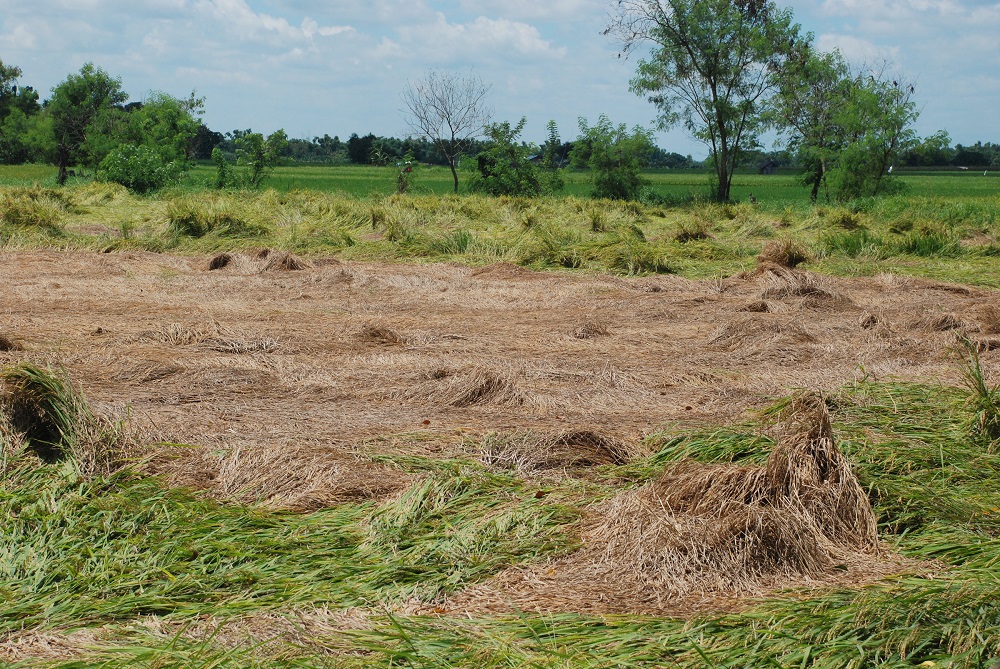 Hopperburn, where rice fields appear to have been scorched by fire, is one of the signs of BPH infestation. (Photo: IRRI)

An “international” gene
In 2006, Dr. Jena discovered the Bph18 gene with scientists from the Rural Development Administration (RDA), a government organization responsible for agricultural research services in South Korea. Five years later, the collaborative team from RDA and IRRI released a new high yielding and delicious variety, ANMI, in South Korea. ANMI carries the Bph18 gene making it highly resistant to BPH and is now commercially cultivated in South Korea. Bph18 is proving to be a more formidable gene. Until now, ANMI is still resistant to BPH.

In 2016, Dr. Jena and his team at IRRI successfully cloned Bph18, from a wild species of rice.

In recent years, BPH infestations have intensified in many countries as the insects developed resistance to widely used pesticides to overcome genetic resistance in plants. The Bph1 and Bph2 genes introduced into the IRRI varieties IR26 and IR42 have succumbed to new strains (or biotypes) of the insect.

The genes cloned by Chinese and Japanese researchers proved to be effective only against BPH biotypes found in the two countries, respectively. The Bph18, on the other hand, is effective against BPH populations in different Asian countries giving rice crops a broad-spectrum protection.

A package of resistance
The genetic resistance to BPH can last from 5 to 10 years before it is breached again, according to Dr. Jena. But thanks to advances in gene cloning, scientists are now doing something to make it last even longer. At, IRRI, Dr. Jena’s team is combining different resistance genes that have been identified through gene cloning.

Released in 1973 in China, IR24 is one of the most popular rice varieties developed at IRRI. But IR24 is susceptible to BPH.

This gives the plant durable or longer resistance, up to 15 years or so, compared with single gene resistance. Once ready, the resistant lines will be sent to different locations in Asia that are affected by BPH problems for field testing.

However, this is not a silver bullet against the BPH problem. Because natural selection is a constant process, BPH is expected to overcome even the triple-gene protection. This process could be hastened by the improper use of pesticides and even climate change that could spurn genetic mutations in the insects.

“Once insects mutate they become more virulent,” said Dr. Jena. “What we can do is continue making new gene packages and put them into rice plants. It is crucial to identify more genes and understand their mechanism of resistance to develop rice varieties with long-term BPH resistance as well as resistance to different variations of the insects.”

Gene cloning is a long, tedious, and expensive process. But for Dr. Jena, it is worth the time and investment that IRRI pours into it.

“I feel very happy when we discover a new gene,” he said. “Because that discovery could be beneficial to rice farmers all over the world.”