Due to increasing water scarcity, there are concerns about the sustainability of rice production systems in parts of Asia, let alone the ability to increase production to feed growing populations. 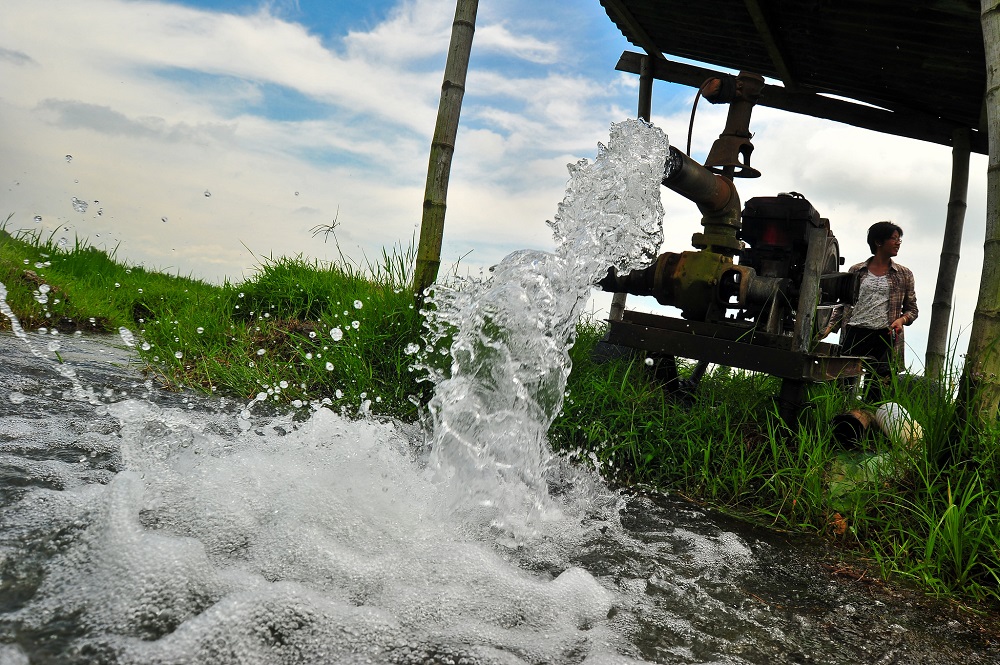 Water is one of the most precious resources for life on earth. Like all living things, rice plants need water to grow and produce grain. The world has about 150 million hectares of rice lands, half of which are irrigated, which provide 75% of the world’s rice grain. Irrigated rice fields are usually continuously flooded for most of the crop season.

However, water for agriculture worldwide is becoming increasingly scarce, including for irrigated rice production. The causes of water scarcity are diverse and location-specific. These include decreasing availability through falling groundwater tables and silting of reservoirs, deteriorating quality through chemical pollution and salinization, poorly maintained and managed irrigation systems, and increased competition for water from other sectors, especially urban and industrial users.

Due to increasing water scarcity, there are concerns about the sustainability of rice production systems in parts of Asia, let alone the ability to increase production to feed growing populations. Furthermore, irrigation for rice is typically 2 to 10 times the amount applied to other crops, because of continuous flooding. In countries such as India, where rice production has increased to the degree that the country is now exporting 10.9 million tons of rice per year, concerns have been raised about the large amount of virtual water exported as rice, given the increasing water scarcity in major food producing areas. In many parts of India, it takes about 4 cubic meters of water (from irrigation and rainfall) to produce 1 kg of rice. Thus, it has been suggested that an export of 10 million tons of rice costs a virtual export (loss) of about 40 trillion liters of water (40 x 109 cubic meters). However, are all of the irrigation and rainfall applied to a farmer’s field really “lost” forever from the river basin in which it is grown? 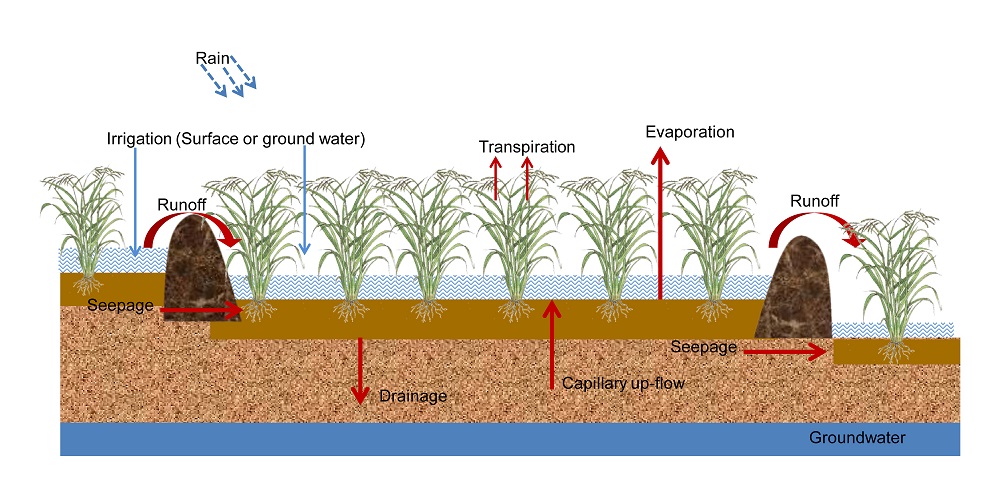 Fig. 1. Water inflows to and outflows from a rice paddy (field).

Water losses from farmers’ fields
Water is supplied to the roots of a crop in a farmer’s field by rainfall, irrigation, capillary upflow from the groundwater, and runoff and seepage from higher lands (Fig. 1, above). Water is lost in many ways from the roots: by plant transpiration, evaporation from the soil or water lying on the soil surface, drainage to the groundwater, and runoff and seepage to lower lands. However, drainage, runoff, and seepage losses from an individual field are often not losses at higher spatial scales. Runoff makes its way to other farmers’ fields or surface water bodies (ponds, streams, drains) from where it may be reused in various ways, and drainage flows to the groundwater, from where it can be recycled by groundwater pumping. Seepage flows to adjacent fields, surface drains or the groundwater.

Thus, to understand the real picture, it is important to consider water flows at the river basin scale, rather than just considering individual farmers’ fields (the pixels).

The dynamics of water in a river basin can be explained through “sources and sinks” concept of Keller et al. (1996). The sources are mainly in the forms of rain, past precipitation (snow, ice), surface stores (river channels, dams, canals, lakes, ponds), subsurface stores (soil profile, aquifers), diversions of water from other basins, and desalinization of seawater. The sinks are destinations for water, or conditions of water, from where or which it cannot be reused in the basin. The sinks include the atmosphere, oceans, inland seas, saline aquifers, and water that becomes too polluted for further use.

When water is withdrawn from a source and used to irrigate a crop, part of it is lost to the atmosphere sink—by plant transpiration and by evaporation from the soil, or from water lying on the soil surface. The rest of the water drains to surface or subsurface storage, which may be sources or sinks depending on the condition of the water. Water is lost from river basins when it flows to sinks.

How to reduce water losses to “save” water?
In the last two decades, there has been good progress in the development of technologies to reduce irrigation water input to rice-based cropping systems, while maintaining yield. These technologies include laser levelling, non-puddled transplanting, dry seeding, alternate wetting and drying AWD) water management, and mulching. The reduction in irrigation input (‘irrigation’ water saving) to a farmer’s field varies from a few percent to about 50%, depending on the local situation. Most people refer to reductions in irrigation input to farmer’s fields as “water savings,” but, this may not be the case in the big picture.

Does “irrigation” water saving in farmers’ fields really “save” water?
“Real” water saving occurs when flows to sinks are reduced. Technologies that lessen irrigation input generally reduce drainage to the groundwater and runoff, but have little effect on evaporation and transpiration (ET), and do not necessarily translate into water savings and increased water productivity at higher spatial scales. In most situations, drainage and runoff are not losses from the river basin because they are captured and reused.

For example, in places where irrigation is from groundwater in an unconfined aquifer (i.e. the uppermost aquifer), such as central Punjab, India, technologies that reduce irrigation input such as laser levelling and AWD greatly reduce drainage to the groundwater—these technologies save energy by reducing the amount of pumping required, but do not save water— they reduce the amount of water pumped from the aquifer, and also the amount of water that drains back to the aquifer.

But, if the upper aquifer is saline, some of the water that drains to the groundwater cannot be reused because it mixes with the saline water. Here, “irrigation” water saving results in”real” water saving. Furthermore, the reduced deep drainage as a result of adoption of AWD could be a benefit in terms of reduced waterlogging and secondary salinization in regions where this is a problem. In situations where runoff and seepage from fields flow to lakes that are polluted with heavy metals and unsuitable sources of water for irrigation, as in parts of China, “irrigation” water saving also results in “real” water saving.

Fig. 2a. (left). Irrigation area during the dry season with continuous flooding of fields—large areas of fallow land due to insufficient water in the dam to irrigate the whole area. Fig. 2b. (right). The same irrigation area with adoption of alternate wetting and drying (AWD) water management, which enables an increase in the cropped area, and thus rice production. This also increases evapotranspiration and reduces drainage and runoff from the irrigation area

In fact, “irrigation” water-saving technologies can increase water losses from a river basin. For example, as rice production area expands because of AWD adoption, the yield increases; but, water loss also increases through ET. And, this is at the expense of farmers and others elsewhere in the basin who rely on groundwater and runoff from the irrigation scheme (Fig. 2b), above).

Unfortunately, little is known about the extent to which “irrigation” water-saving technologies result in “real” water savings. Until now, few studies have looked at water reuse within irrigation systems and explored the consequences of adopting water-saving technologies in rice production systems. Donors are keen to fund programs that disseminate technologies that reduce irrigation input, but without knowing whether or not this will really help to reduce the water scarcity problem, or perhaps even make it worse! Good case studies on canal and groundwater irrigation systems are needed to understand the effects of adopting “irrigation” water- saving technologies—such as changing from continuous flooding to AWD—on water outflows and the impacts of the changed outflows on all water users, inside and outside the irrigation scheme.

Also, the development and application of models and other approaches are needed to assess the impacts of wide-scale adoption of “water saving” technologies at a range of spatial scales from subdistrict to sub-basin and basin. The ultimate challenge is to design land use strategies, cropping systems, and management options that will meet food production needs, and that will be biophysically and socioeconomically sustainable in the longer term, appropriately targeted to the range of environments in which rice (and other crops) are produced.

As for the export of virtual water from India in 10.9 million tons of rice, it is probably only about a quarter of the 40 trillion liters suggested above, because only the water lost as ET should be considered—but yes, it is still a huge amount! However, whether this fact is of any practical value for policy development is a separate question.

Dr. Yadav and Dr. Humphreys are scientist and former senior scientist, respectively, under the Water Science Group in the Crop and Environmental Sciences Division at IRRI.