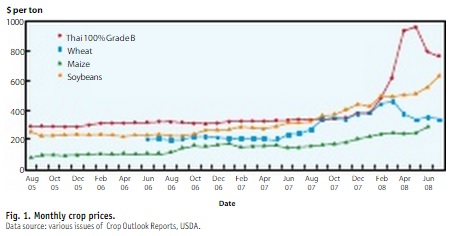 Compared with the prices of other cereals such as wheat and maize, rice prices were relatively subdued for much of 2007. In late 2007, however, prices began to zoom upward to levels not witnessed in more than three decades. Between November 2007 and May 2008, export prices almost tripled (Figure 1). Since then, prices have softened but remain high.

Despite media and public attention to the recent price surge, a steady increase in rice prices from 2000 went largely unnoticed. From 2001 to 2007, rice prices nearly doubled primarily because of a drawing down of stocks to meet the deficit arising out of deceleration in yield growth (Figure 2). Current global rice stocks have declined from a 135-day supply to a 70-day supply in the last 7 years—a 44% drop from 147 million tons in 2001 to 82 million tons in 2008.

Despite higher prices, rice consumption is expected to remain strong because of substitution away from more expensive food such as fruits, vegetables, and livestock products. Global consumption in 2008-09 is projected to be around 426 million tons, an increase of around 1% from the previous year.

Despite expectations that global stocks will continue to increase in the coming year, prices are likely to remain high partly in response to export restrictions imposed by key rice-producing countries. Making matters worse, already depleted stocks in the U.S.—one of the few countries that resisted imposing export restrictions during the recent crisis—are projected to decline further, further destabilizing the market in the coming months. However, as the bulk of the  2008 crop enters the market in October, prices may soften.