A team of scientists from the International Rice Research Institute (IRRI) and the University of California Riverside recently published a study unlocking the secret to just how rice seeds might be able to survive when grown under water. 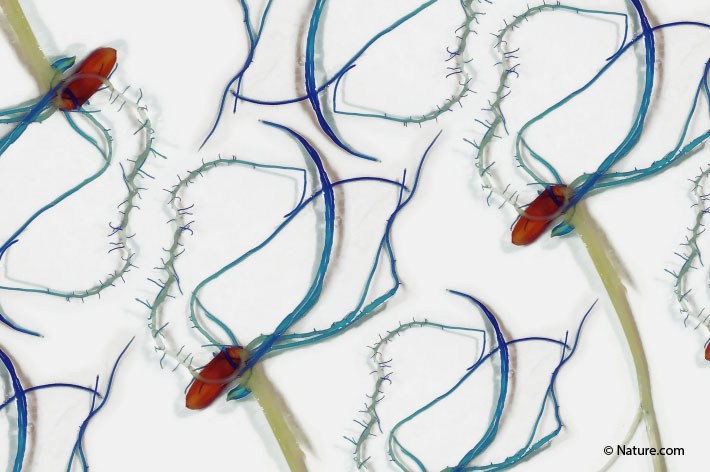 The study, which appears in the leading scientific journal Nature Plants, identified a gene that controls the availability of sugar to a growing seed, especially when under flooded conditions.

“Basically, the gene that we identified as AG1 (or OsTPP7) works opposite the one found in scuba rice, in which the SUB1 gene signals the plant to conserve energy while underwater, allowing it to stay dormant until the floodwater recedes,” said Dr. Tobias Kretzschmar, one of the paper’s authors and head of IRRI’s Genotyping Services Laboratory.

A surprising find
“The gene that we found creates an ‘all or nothing’ escape mechanism that tricks the seed into thinking that more sugar should be given to its shoot—the plant part that grows into stems and leaves—so that the seed under water is able to grow more quickly and reach the surface of the water,” he said.

He explained that the mechanism works when the seed is submerged up to a water depth of 10 cm, and can get ‘activated’ as soon as the seed is sown.

“This is the first time anyone has established that the AG1 gene is responsible for this specific type of mechanism because it comes from a family of genes—and rice has 13 members of this family of genes,” Kretzschmar said.

“This mechanism is well known on the other end of plant development during grain filling, but this is the first time it’s been shown to be important during germination,” he stressed. 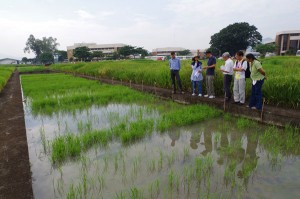 Seeds of the IR64 rice variety with the AG1 gene could grow even when underwater (see third from right row inside flooded plot) as seen in 2013 field trials. (Photo: Michael Thomson)

Rice survival under flooding is important when it comes to direct seeding, in which seeds do not have to be pre-germinated and then transplanted. With direct seeding, seeds can be directly sown or broadcast into the field, requiring less time and energy from farmers.

Mystery of the missing gene
“One thing that I’ve noticed is that Indica varieties, which are the ones mostly grown in the tropical parts of Asia, lack the trait or ability to grow under flooded conditions,” said Kretzschmar.

“But in Japonica, varieties grown in the more temperate regions of Asia, Australia, and the United States, the trait is present,” he added. “That’s why these varieties have fewer problems with direct seeding.”

He explained that the missing trait is a problem, especially with modern Indica varieties, as traditional ones have it.

Looking for an answer 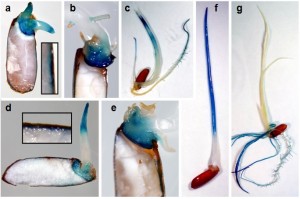 Thanks to the AG1—or OsTPP7—gene (shown in blue), rice seeds will be able to grow and survive when submerged in water up to 10 cm. (Photo: Tobias Kretzschmar)

“We looked at a third to a half of IRRI released varieties, but the gene was missing. At first, we thought that maybe it was actively bred out, meaning that it could have had some negative effect, so the IRRI breeders selected against it,” Kretzschmar noted.

Former IRRI scientist Endang Septiningsih, who initiated and led the project, looked for a yield penalty or negative effect on the yield by AG1 but found none.

“We actually think it got lost,” Kretzschmar said. “And we knew where it got lost. The gene got lost at the stage when IR8, the famous miracle rice variety, was bred because one of the parents had the gene, while the other did not.”

Fitting pieces together
“I guess it was just never needed as a trait because the varieties were transplanted almost every time so there was no pressure for it. If they were direct seeded, then that gene would have probably been retained from the very beginning,” explained Kretzschmar.

“Now that direct seeding is becoming popular, we’ve realized that we need that gene in the breeding program. Through the marker-assisted backcrossing approach as it was done with the SUB1 gene introgression, which significantly reduces the breeding period, you can reintroduce the gene and then fix it within one-and-a-half to two-and-a-half years,” he added.

The way forward
With the unfolding of the ‘AG1 secret’, the work of rice scientists is far from done. “AG1 works well on moderate stress conditions. It also combined well with the SUB1 gene in the same genetic backgrounds although they have opposing mechanisms. In severe stress conditions, however, AG1 alone is not sufficient–additional quantitative trait loci (QTLs) or genes that complement the AG1 mechanism will be needed,” added Septiningsih, who recently joined the Department of Soil and Crop Sciences, Texas A&M University. IRRI and its partner universities are moving in that direction.

Research in IRRI was funded by  the German Federal Ministry of Economic Cooperation and Development, the Bill and Melinda Gates Foundation and the Global Rice Research Partnership.

Paula Bianca Ferrer is a communication specialist at IRRI.