INGER, the world’s largest agricultural research network, has a long history associated with milestones in rice breeding. Overall, more than 1,120 of its tested lines were released as varieties in 74 countries. Now celebrating its 40th year, INGER faces a different kind of challenge: its own sustainable future. 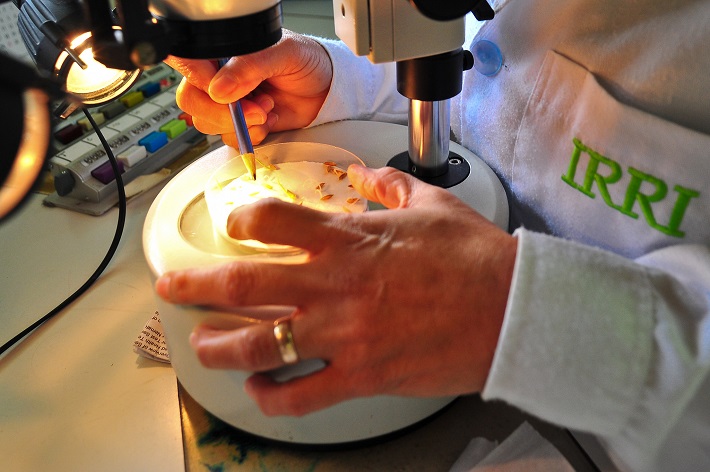 Now celebrating its 40th year INGER) has released around 55,550 breeding lines that have been evaluated by hundreds of rice scientists at more than 600 research stations in 85 countries. Overall, more than 1,100 INGER-tested lines have been released as varieties in 74 countries. These pooled test materials from around the world have brought much needed genetic diversity to farmers’ fields. However, after 4 decades, it is time to look at INGER in retrospect and reflect to review what has been achieved and to brainstorm for the future. (Photo: Isagani Serrano)

Research at the International Rice Research Institute (IRRI) and other international agricultural research institutes (ARIs) is about discovery—and sharing those discoveries with partners in the national agricultural research and extension systems (NARES) to alleviate hunger and poverty in the world. One research partnership that has been truly successful in such sharing is the International Network for Genetic Evaluation of Rice (INGER), founded by IRRI in 1975 and celebrating its 40th anniversary this year. 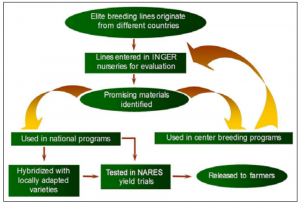 According to Ed Redoña, who served as INGER coordinator at IRRI from 2006 to 2014 and currently a rice breeder at Mississippi State University’s Delta Research and Extension Center, INGER—known as the International Rice Testing and Improvement Program (IRTIP) prior to 1989—has been one of the longest-running germplasm networks in CGIAR.

“Through its primary mechanism of international nurseries (see figure), over the past four decades, nearly 3 million seed samples representing around 55,500 entries of advanced lines have been shared for evaluation by hundreds of rice scientists at more than 600 research stations in 85 countries (see map below),” says Dr. Redoña.

“INGER is the world’s largest agricultural research network and an epitome of veritable synergy,” says D.V. Seshu, who was associated with INGER for more than 20 years while at IRRI. And, as its second coordinator in 1982-93, he coined “INGER” to be the network’s new name in 1989. “Thanks to INGER, we have been able to obtain significant information on the nature of biotype and pathogenic variation in major rice pests and diseases and on the interaction of rice with major weather variables. The pooled test materials from different countries have brought in much-needed genetic diversity.”

In 1997, Yale University economists Robert Evenson and Douglas Gollin affirmed INGER to be a high-payoff activity. They estimated that each released rice variety contributes, on average, USD 2.5 million (1990 dollars) annually to the global economy.They maintained then that this annual value continues into perpetuity because varietal improvements are considered to be additive.

India. According to V. Ravindra Babu, director of the Indian Institute of Rice Research (IIRR), varietal improvement in India has involved the pooling of breeding material generated in more than 100 regional ricebreeding stations across the country. “The greatest advantage has been the free exchange of genetic material both nationally and internationally through INGER,” he says.

N. Shoba Rani, retired head of IIRR’s Crop Improvement Section, agrees with Dr. Babu on INGER’s significance. “INGER has been immensely beneficial to India from many IRRI-bred lines released and becoming popular, resulting in enormous gains in rice production,” she says. “About 43% of Indian rice varietal releases have been introduced through INGER.” Some 252 varieties with INGER-derived parents have been released in 24 Indian states.

China. “From 1981 to 2012, around 16.6 million hectares were cumulatively planted with INGER materials,” says Shihua Cheng, director general of the China National Rice Research Institute. “These materials resulted in the harvesting of 6.2 million more tons of rough rice with an economic benefit of around USD 530 million.”

And just like with India, INGER provides a two-way conduit in China. “At least 2,500 INGER entries were used as parents, restorers, and/or disease and pest-resistant donors in national and regional rice breeding programs,” says Dr. Cheng. “On the other hand, around 560 outstanding Chinese rice varieties have been nominated to INGER over the years for global evaluation and use in other countries.”

Philippines. To date, just over half of the varietal releases in the Philippines have been introduced through INGER. “The network’s approach of providing free access to germplasm has substantially increased rice genetic diversity in the Philippines,” says Thelma Padolina, coordinator of the National Cooperative Testing for the Philippine Rice Research Institute. “For more than three decades, INGER has provided Filipino rice scientists with elite genetic materials, nursery results, and reports of monitoring visits,” she adds.

“Annually, since 1982, INGER has enriched the country’s breeding program with materials, which have proven useful in improving the genetic structure of Philippine rice varieties. Many varieties have been commercialized and a majority have been selected as donor parents for disease resistance and grain quality.”

Turkey. “The network must be continued for the next generation,” pleads Halil Sürek, a botanist known as Turkey’s Father of Rice who has been testing and using INGER materials since 1979. “I have been working as a rice breeder for 36 years,” he says. “And it is difficult to get genetic material from foreign sources. Using INGER material in crossing programs makes it possible to enhance genetic variation and solve biotic and abiotic constraints.”

Dr. Sürek points out that he can obtain information on the performance of Turkish materials as well under different biotic and abiotic conditions through INGER. “Using INGER material, we have developed five Turkish varieties,” he adds.

LAC. “INGER has been a cornerstone for the development of rice varieties in Latin America and the Caribbean (LAC),” says Edgar Alonso Torres, head of the Rice Breeding Program at the International Center for Tropical Agriculture (CIAT) in Colombia. “Since 1976, this network has been effective in disseminating improved materials. Around 115 rice varieties released in LAC originated from elite INGER lines. This germplasm also provides valuable donors for blast resistance and cold tolerance, among other key traits. For the future, with adequate intellectual property (IP) protection, I hope that INGER will continue to be an important player in distributing genetic variability in rice.”

Elsewhere. INGER’s impact is even more pronounced in smaller and newer breeding programs. This is according to Glenn Gregorio, former IRRI plant breeder and acting INGER coordinator for a time in 2014-15.

“For example,” he says. “Varietal releases directly or indirectly traceable to INGER are 73% for Nepal, 72% for Myanmar, 61% for Indonesia, and 51% for Cambodia. INGER has helped IRRI generate impact even in countries not covered by major projects such as Stress-Tolerant Rice for Africa and South Asia. To date, 507 of IRRI’s breeding lines have been released as 914 varieties in 78 countries on five continents.

Over the years, a favorite topic of Gelia Castillo, Philippine National Scientist and IRRI consultant, is espousing the social and cultural values of INGER. “Beyond the genetic lingo of B2161C-MR-57 and P901-22- 11, people actually lie at its heart,” she says (see Cultural diversity through genetic diversity on page 31 of IRRI’s 1997-98 annual report, Biodiversity: Maintaining the balance). “The network fosters participation in a culture of cooperation, consciousness of sharing, and exchange—not only of breeding lines, but of information, insights, and experiences toward a shared objective.”

According to Dr. Castillo, rice seeds share a common food value and “speak” a common language that transcends politics, geography, and culture. In Africa, for instance, INGER helped break a barrier in rice science between English-speaking and French-speaking countries. She maintains that INGER is a beautiful illustration of humanity working together for our common future in a world filled with social conflicts, tribal wars, and fierce competition over the control of natural resources. 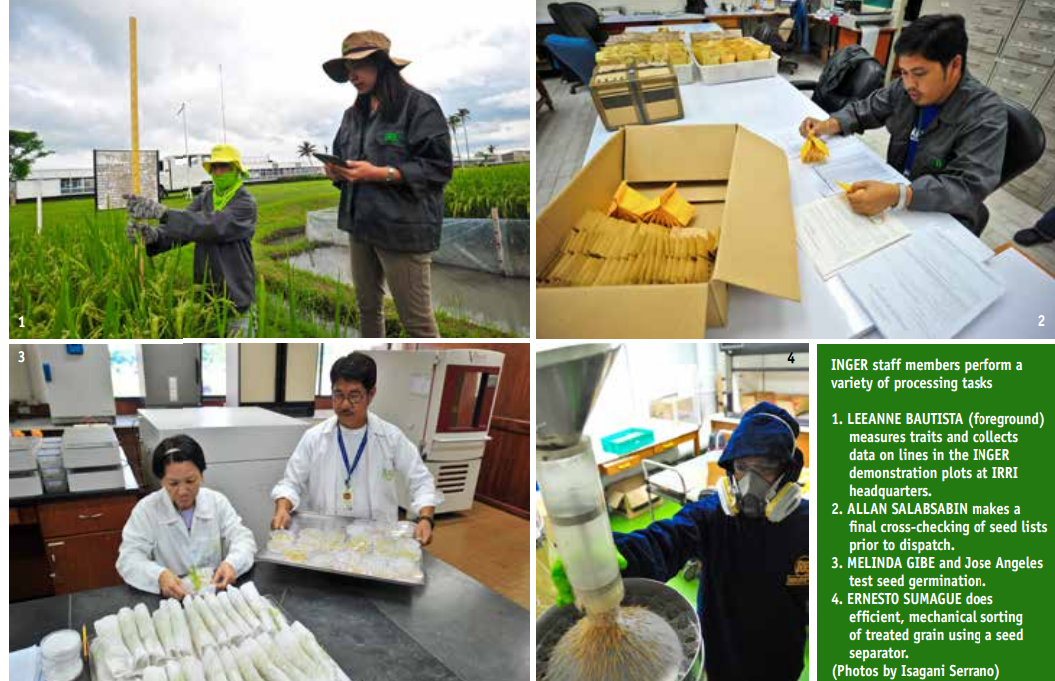 A number of donor agencies, seeing the importance of INGER’s germplasm- and information-sharing activities, have supported INGER over the decades, most notably the United Nations Development Programme (1975-96); the World Bank (1991-96); the Swiss Agency for Development and Cooperation (1995); the German Federal Ministry for Economic Cooperation and Development (1995-97); and, to varying degrees after 2000, Korea’s Rural Development Administration; the Bill & Melinda Gates Foundation; the Japan Ministry of Agriculture, Forestry, and Fisheries; and the UN’s Food and Agriculture Organization, among others. However, periodically, donor priorities shift and INGER has had to tighten its belt, relying mainly on IRRI’s own unrestricted funds. In 1992, INGER merged with IRRI’s Genetic Resources Center because of budget-related downsizing. In the early 2000s, E.A. Siddiq, renowned Indian rice breeder and IRRI Board member (2000-06), recalls that, while serving on the Board, the body was contemplating terminating INGER because of the budget cuts of the time (see Celebrated Indian scientist speaks his mind).

“I impressed upon my fellow board members that it was INGER that provided IRRI with true visibility in the rice world,” Dr. Siddiq recollects. “Connecting almost all rice-growing countries through international testing and exchange of germplasm, it was INGER that enabled ricegrowing countries to strengthen their rice-breeding research and develop varieties suited to their own different ecosystems. I emphatically said, ‘Don’t prune INGER because what you are spending on it is not that much, but what you gain is much more.’ Luckily, I and other INGER proponents on the Board won out and INGER continued.”

In 2002, as a solution to keep the network viable, INGER was transferred to IRRI’s Plant Breeding, Genetics, and Biotechnology (PBGB) Division where it became an integral part of PBGB’s seed exchange and germplasm distribution activities.

INGER at the crossroads

“Breeders have a never-ending job to develop new varieties, but often encounter the problem of having a narrow genetic base,” says Bert Collard, IRRI rice breeder and acting INGER coordinator. “INGER nurseries provide this critical infusion of genetic diversity and new genes to rice breeders. So, as a breeder, it is a no-brainer that INGER must continue in some form. However, the direction that the network will take post-40 is unclear.”

IRRI foots a significant bill for all INGER costs in processing incoming seeds from NARES and ARIs (around 12 steps that include seed health and quality evaluation, planting, crop health inspection, data collection, harvesting, and cold storage) and then dispatching these seeds to various cooperators (another 10 or so steps that include viability testing, cleaning and grading, manual sorting, fungicide treatment, fumigation, and seed packing). The current funding to pay for all of this voluminous cost is not sustainable, and thus has to change.

“A leaner, market-driven, and more precise and efficient INGER that will emphasize elite line quality over quantity is the only way to go,” opines Dr. Collard. Although funding shortfalls may be a great obstacle, INGER has to contend with two other issues. “

One involves IP concerns that have forced many NARES cooperators to submit fewer and fewer materials or none at all.” Dr. Collard points out. “There are competitive advantages at stake and all sorts of IP implications that were not scrutinized 40 years ago. So, often, many of our cooperators are now merely recipients of lines that are mostly from IRRI.”

The second issue is that partners tend to return less and less data. “These data are very precious to IRRI and have been a key pillar of INGER’s past success,” says Dr. Collard. “Accurate data will be all the more important in the future as we attempt to sort out unpredicted adverse effects of climate change around the world.”

Dr. Collard, his two INGER predecessors, Drs. Redoña and Gregorio, and other IRRI breeders have been contemplating options for INGER’s future.

“The future probably lies somewhere in between,” surmises Dr. Gregorio.

This might involve, among other ideas, access to the most advanced and well-characterized germplasm coming out of the newly organized and effective multienvironment rice varietal testing (MET) system, cost recovery charges for cooperators and joining fees for the private sector and ARIs, and a system of rewards and benefits for breeders of most-used or released materials. A long-overdue retrospective So, after 40 years, it is time to look at INGER in retrospect and reflect.

“IRRI plans to invite key INGER partners from around the world—both veteran and new—to a comprehensive, no-holds-barred workshop to brainstorm about INGER’s next 40 years,” says Dr. Collard. “I’m optimistic and excited about what we will come up with. Stay tuned!”