A new breed of rice is helping Filipino farmers in Bohol cope with seawater encroaching on their paddies. But in the race against climate change impacts such as rising sea levels, will rice scientists be able to stay one step ahead of the game?

By some twist of fate, Felixberto Rosales’s luck changed during the wet season of 2014. Mr. Rosales, a farmer in the province of Bohol in Central Philippines, found himself needing to replant his field after golden apple snails damaged his rice seedlings. He asked a lady farmer he met at a seminar in Talibon, Bohol, if she could spare him some seedlings of the salt-tolerant rice varieties that she had obtained from her extension officer. What he did proved to be a turning point in his life. 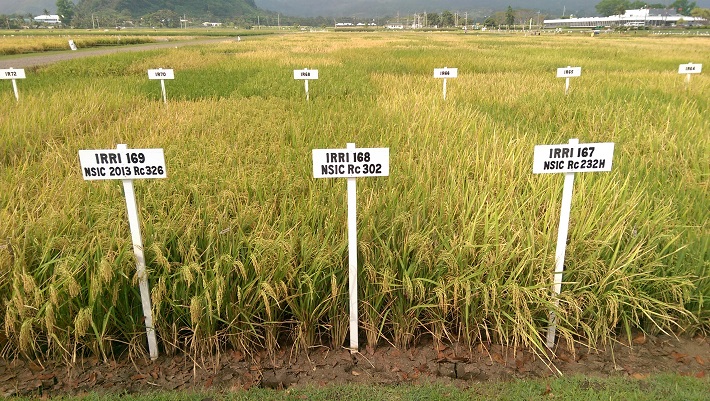 Salinas 11 or IRRI 169 (left) is a superior variety especially bred for salt-ridden areas. It is also sold as gourmet rice in some parts of the Philippines because of its high quality, reddish grains. (Photo: Glenn Gregorio)

For almost 10 years, Mr. Rosales had been struggling with problems of salinity on his 1.25-hectare farm—especially in those parts near the shoreline where seawater comes in during high tides. Like him, Antonia Quimson, the lady farmer who shared her rice seedlings with him, couldn’t make use of some parts of her land because of salinity.

“That was how I got Salinas 11 seedlings from the municipal agriculture office in the first place,” explained Mrs. Quimson, who is also a village councilor. Salinas 11 is one of the 15 climate change-resilient rice varieties developed by the International Rice Research Institute (IRRI), the Philippine Rice Research Institute, and the Bureau of Agricultural Research, for areas affected by saltwater intrusion.

According to IRRI’s online Rice Knowledge Bank, millions of hectares in the humid regions of South and Southeast Asia are suitable for rice production but are not cultivated or suffer from very low yields because of salinity and problem soils. Encroaching seawater in low-lying areas is making the soil too salty to grow crops. Reduced river flows and rainfall during the dry seasons can further increase saltwater intrusion, as seawater during high tides move farther upstream. “Of the 25 villages in Talibon, 17 grow rice and 8 of these are in coastal areas,” explained Mr. Lito Oroyan, a municipal extension officer who provides improved rice varieties to farmers like Mrs. Quimson.

“It was the best among the salt-tolerant rice varieties I have tried!” she said. “Now, we’ve had extra areas near a fishpond cleared so we can also grow rice there.”

Currently, Mr. Rosales is seeing Salinas 11 “in action” on his farm. “What’s good about this variety is that the plants looked good even when there was seawater,” he said. “But they looked and performed even better when there was none.” 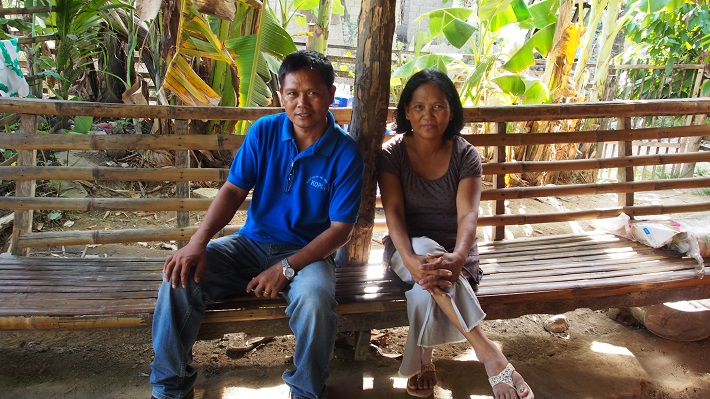 Balancing genes and farmers
As much as rice is an important food staple consumed by more than half of the world’s population, it is also the most susceptible to salinity among all cereal crops. But, not all rice types are created equal. Some of them can, in fact, tolerate salinity—just not in the same way, because different genes work differently.

The most popular and commonly used gene for rice breeding, Saltol (short for salinity tolerance), allows a rice plant to block the entry of too much salt into the plant through its roots. Other genes allow a rice plant to “sense” when too much salt is getting into the plant, and then sends the excess to old leaves, the stem, or storage bubbles found in cells (vacuoles)—the parts of the plant that are least sensitive to salt. Some genes enable rice plants to neutralize excess salt inside them with potassium. However, breeding for salinity tolerance is not as straightforward as one might think, as most rice types, which naturally have the trait, are also either low-yielding or have poor eating quality.

“Contrary to popular belief, breeding isn’t simply about crossing rice types with the same set of ideal traits together,” said Glenn Gregorio, former plant breeder at IRRI who led the development of salt-tolerant varieties. “It’s getting the right combination of ideal traits in a plant, and ensuring that those really do get expressed when the plant is under stress.

“It’s very rare for farmers to consider only one or two traits when thinking about adopting a particular rice variety. Oftentimes, they also check how long it takes to produce grains, how tall it grows, or how resistant it is to pests and diseases,” Dr. Gregorio added. “That’s why it also takes several years of crossing generations of rice types before you get to that stage where a variety can already be released by the national system to be adopted by farmers.”

Salinas 11 is a perfect example of a rice variety that not only has the right genes but appeals to farmers as well. “I didn’t mind the faint reddish color of the grains. I still like the eating quality,” said Mrs. Quimson who is used to varieties with white grains.

“Now, even farmers in other provinces in the Philippines with no problems with salinity are growing Salinas 11, preferring it over popular varieties, because they’re selling it as gourmet rice, which fetches a higher price,” Dr. Gregorio added.

More than one way to beat salinity
In 2014, Apolinar Asa, another farmer from Bohol, tried 18 different salt-tolerant rice varieties, but none of them survived in his field located in Boyoan, Candijay. “I guess salinity was just so high that the rice plants couldn’t stand it,” Mr. Asa remarked.

Twenty years ago, farmers such as Mr. Asa benefited from an irrigation system running from Gabayan Lake all the way to 13 different villages in Candijay, including Boyoan, located at the farthest end of the irrigation line. The freshwater from the lake helped flush out the salt that encroaching seawater brought into the fields. 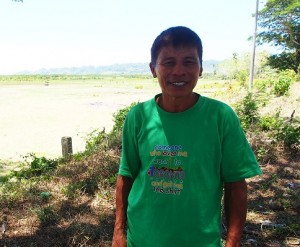 Filipino farmer Apolinar Asa said that Green Super Rice varieties might be able to give farmers like him a fighting chance against climate change. (Photo: Paula Bianca Ferrer)

Since even salt-tolerant rice varieties failed, Mr. Asa and his fellow farmers were forced to adapt to their situation. “Now, we typically delay planting until August, when more chances of storms are brewing on the horizon,” he said. “Some people pray for storms not to happen; we farmers pray otherwise. We have to rely on storms because strong rains—and sometimes floods—help flush away the excess salt.”

But, the changing and erratic climate pattern is taking its toll as well. “Sometimes our little weather predictions don’t come true,” he said. “The storms won’t push through, for example, so 70–75% of our crops fail. But, a new variety called Green Super Rice, which an extension officer asked me to try, was able to survive.”

Green Super Rice (GSR) varieties are a mix of more than 250 different promising rice varieties and hybrids. They have combined tolerances for different stresses and other useful traits so that they can adapt even in harsh conditions.

“I was able to harvest 47 sacks (a sack weighs 45‒50 kilograms) from one of the five GSR varieties I tested on the 0.6 hectare of farmland that I own,” Mr. Asa said. Like Salinas 11, the GSR variety that Mr. Asa planted has more going for it than just salt tolerance. “The eating quality was also good and it didn’t spoil as easily as my other varieties,” he said.

“Several farmers here in our village already asked me for some seeds,” Mr. Asa added. “I think GSR varieties might be able to give us a fighting chance against climate change.”