Once a rice exporter, Côte d’Ivoire has spent in recent years nearly USD 500 million annually on rice imports. Now, the country has set its sights on becoming West Africa’s rice granary through a program estimated to cost more than USD 1.3 billion from 2012 to 2016. 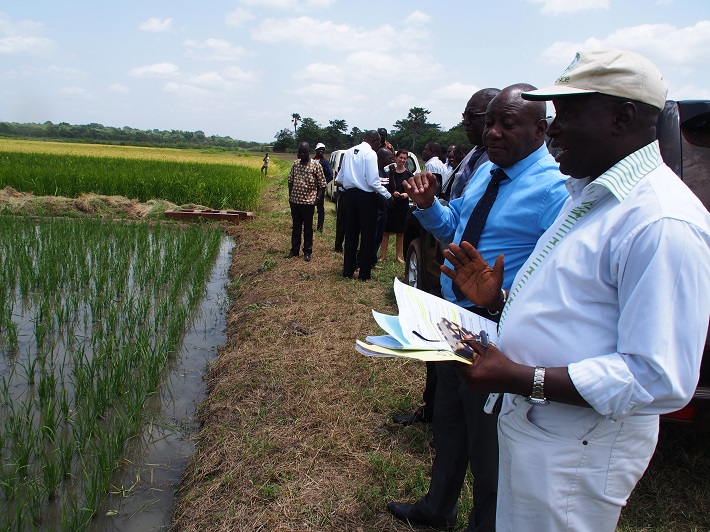 Often called “the jewel of West Africa” because of its strong economy, Côte d’Ivoire is widely known as the world’s top producer of cocoa. Now, the country has launched an ambitious program for agricultural diversification and has set its sights on becoming West Africa’s rice granary.

“We want to produce enough rice not only to supply for our own needs but also for the import needs of the subregion,” said Yacouba Dembélé, director of the National Office for Rice Development.

The country seems to be making great strides toward achieving this goal. In March 2015, Ivorian Agriculture Minister Mamadou Sangafowa Coulibaly expressed his happiness over the spectacular growth of rice production in the country. “Milled rice production jumped from 550,000 tons in 2011 to 984,000 tons in 2012. It is estimated to have reached 1.3 million tons in 2014.”

FAO’s Rice Market Monitor of April 2015 indicates that rice imports to Côte d’Ivoire dropped in 2014 compared with 2013, thanks to a generally favorable climate combined with state support and special attention paid to the rice sector as part of the country’s self-sufficiency drive.

Côte d’Ivoire was once a rice exporter but, with progressive disengagement of the government from the rice sector, it has not been able to meet its own requirements and has been importing huge quantities of rice, spending nearly USD 500 million annually on rice imports in recent years.

As in the food crisis in 2008, this is a risky strategy that led to riots in some African countries. Since then, the Ivorian government has made active efforts to improve domestic rice production and prevent such emergencies in the future.

A national rice development strategy (NRDS) was formulated in 2008 under the Coalition for African Rice Development framework, with technical support from the Africa Rice Center (AfricaRice). To further boost the rice sector, the government revised the NRDS to cover the period 2012-20.

A new vision and strategy for the country’s rice development
The vision of the revised NRDS is to meet national consumption requirements through local production of 1.9 million tons of good-quality milled rice by 2016, to increase to 2.1 million tons by 2018. This will help the country build a buffer stock and export surplus production.

The NRDS emphasizes that the country can achieve its goal as it has abundant lands suitable for growing rice, favorable climate with ample rainfall, trained farmers, promising technologies, good market potential, and a favorable economic and institutional environment.

The new strategy focuses on the entire value chain—from seed to production, processing, and marketing. Priorities include development of a seed sector, rehabilitation of irrigation sites, mechanization, support for processing and marketing of local rice, improving the institutional framework along the rice value chain, and an information system to provide business operators with reliable data.

The entire program is estimated to cost more than USD 1.3 billion over four years (2012-16). This is being mobilized through a rice development fund and from development partners and the private sector. The government is also trying to attract international investors to set up joint rice projects in the country. 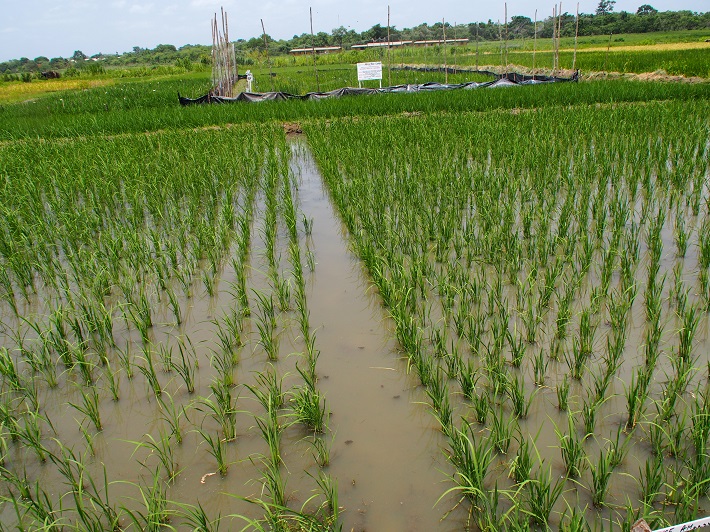 Agronomy experimental field in M’bé. The partnership between AfricaRice and Côte d’Ivoire dates back to 1988, when AfricaRice headquarters was established in M’bé, some 350 km north of Abidjan. (Photo: R.Raman/AfricaRice)

Partnership with AfricaRice
The government is very keen on the return of AfricaRice headquarters to Côte d’Ivoire. AfricaRice, which the country recognizes as a major partner in the strategy, has been asked to work with the national agricultural research center to provide rice knowledge and technical assistance, especially in making quality seed available to farmers.

“The lack of quality seed is a major bottleneck in realizing our goal,” said Minayaha Siaka Coulibaly. “Therefore, we are very happy that AfricaRice will have a strong presence in Côte d’Ivoire and can help us with this aspect.”

The partnership between AfricaRice and Côte d’Ivoire dates back to 1988, when AfricaRice headquarters was established in M’bé, some 350 km north of Abidjan. But, because of a political crisis in the country, AfricaRice had to temporarily relocate its headquarters to Cotonou, Benin, in 2005.

With stability returning to Côte d’Ivoire, the AfricaRice Board of Trustees in its March 2015 meeting decided that the center’s headquarters will be moved from Cotonou to Abidjan. The Center will also start to re-use its 700-hectare research complex at M’bé, which encompasses all the main rice-growing environments.

“This will help us deliver on and expand the Center’s research agenda and realize greater impact on the ground, especially through activities relating to gene discovery, prebreeding, breeding, and agronomy,” said Marco Wopereis, deputy director general of AfricaRice.

Already, agronomic studies—including trials on rice-based cropping systems with a focus on conservation agriculture—are being conducted at the M’bé station. This is part of a joint project between AfricaRice and the French agricultural research for development organization (Cirad).

“These studies will help us develop cropping systems that can provide plant protection with minimum input, reducing both the dependence of African farmers on chemical inputs and the environmental impact of these chemicals,” said Olivier Husson, Cirad systems agronomist and agroecologist working with AfricaRice.

For the past few years, the station has been used for the production of foundation rice seed in response to demand from several AfricaRice member countries. Quality seed for rice farmers in Ebola-affected countries is now being produced with support from several donors, notably Japan, the United States Agency for International Development, the World Bank, and the Economic Community of West African States.

“The station has also started offering seed-production courses for national partners,” said Amadou Beye, regional representative of AfricaRice for Côte d’Ivoire. “We also have several joint projects in the country, such as the African Development Bank-supported one, Support to agricultural research for development of strategic crops in Africa.”

According to AfricaRice Director General Harold Roy-Macauley, with the return of AfricaRice headquarters to Côte d’Ivoire, the country will benefit not only in terms of rice technologies but will also have easy access to training opportunities for strengthening the capacity of the various actors involved in the rice value chain that will contribute to boosting the rice sector.

The Ivorian government has generously offered to AfricaRice a building in Abidjan to house the new headquarters in recognition of the pan-African status of the center. “The government has pledged strong support to AfricaRice, and this is of mutual interest,” stated AfricaRice trustee Séraphin Kati-Coulibaly, director general for scientific research and technological innovation of the Ivorian Ministry of Higher Education and Scientific Research.

Thanking the Ivorian government and people, Dr. Roy-Macauley said, “We are equally committed to helping the country achieve its objective of rice self-sufficiency.”

Ms. Mohapatra is the head of Marketing and Communications at AfricaRice