Trichogramma are tiny beneficial wasps that feed on the eggs of several pests, including stemborers and leaffolders. To help rice farmers in the Greater Mekong Region, a project was launched in 2011 to promote the establishment of Trichogramma mass production facilities and affordable and practical pest control methods. 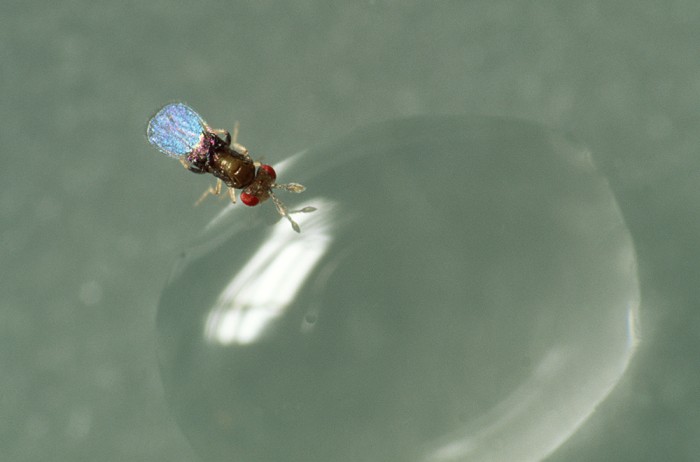 A Trichogramma wasp is one of the first defenses against rice pests. (Photo courtesy of Gabi Brändle, Agroscope)

Rice is culture. It’s a way of life along the Mekong—Southeast Asia’s longest river. Six countries share the river, which begins as a small mountain stream on the Tibetan Plateau. After 4,300 kilometers of writhing through forests, swamps, farms, and towns, the river bursts toward the sea, creating one of Asia’s great deltas—the Mekong Delta. Rice is produced all along the river from the highlands of Yunnan, including the ancient Honghe Hani Rice Terraces, to the balmy delta region of South Vietnam. Farmers along the river represent a diversity of cultures including the Dai, Hani, Khmu, and Karen peoples. Despite this diversity, these cultures all share a common responsibility of protecting the health of the Mekong. To achieve a healthy river, farmers must first maintain a healthy rice environment.

A project, funded through EuropeAid of the European Union, was launched in 2011 to help rice farmers in the Greater Mekong Region reduce their pesticide use and improve the sustainability of their rice farms. The project turned to an unlikely source for help: a tiny parasitic wasp called Trichogramma. These wasps are less than one millimeter long—their tiny size can be attributed to their specific life history as they develop inside the eggs of herbivorous insects, particularly moths. Trichogramma wasps will feed on the eggs of several moth species, but in rice they mostly attack the eggs of stemborers (Scirpophaga spp. and Chilo spp.) and leaffolders (Cnaphalocrocis spp.)—two insect pests feared most by farmers.

Adult female wasps actively seek out the eggs of the stemborer and leaffolder in rice fields. Once an egg is located, the wasp deposits her own eggs into it. Within about 10 days, instead of caterpillars emerging from the stemborer eggs, completely-formed, young adult wasps come out—with an appetite for more stemborers. The highly efficient Trichogramma wasps naturally inhabit rice fields; however, they are sensitive to chemical pesticides. The high use of pesticides in many rice-growing areas has depleted the numbers of Trichogramma and other natural enemies of rice pests, which leaves farms vulnerable.

The project promotes integrated management of rice pests (IPM) by establishing rearing facilities to produce Trichogramma wasps and distribute these to local farmers, including farmers of the Dai and other local cultures. The project target was to create four Trichogramma rearing facilities in each of three Mekong countries: China (Guangxi and Yunnan Provinces), Lao PDR, and Myanmar.

Eleven of these facilities have been completed in Dehong and Xing’an in China; Yangon, Mandalay, and Shwebo in Myanmar; and Vientiane and Sayabouri Provinces in Lao PDR. The final facility will be constructed near Yezin Agricultural University in Myanmar in 2015. 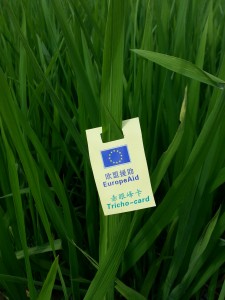 Producing Trichogramma is not a simple task. The wasps need moth eggs on which to feed and develop. Thus, the project uses a nonpest species, the Corcyra moth (Corcyra cephalonica) as a production host. Millions of Corcyra eggs are produced each day in the rearing facilities as food for the developing Trichogramma wasps. While the tiny wasps are still developing inside the Corcyra eggs, they are attached using a light adhesive to special cards called “Trichocards,” which the farmers can hang on their rice plants during the most vulnerable crop stages. Each Trichocard contains about 1,500 developing Trichogramma. Once they emerge from the Corcyra eggs, they fly off and seek out the eggs of stemborers and leaffolders in rice fields. Each rearing facility is expected to reach a target of 600–700 hectares of rice fields protected by the wasps.

To develop the most efficient methods of rearing the wasps and bringing them to the farmers, the project brought together a group of specialists. Tianyi Biological Control Company Ltd., (in Hengshui, Hebei, China), a company with experience in the mass production of biological control agents, helped design the production facilities and trained the managers and staff at each facility to rear the Trichogramma wasps. Experts from government plant protection centers in each of the three countries monitored the incidence of stemborers and pinpointed the most vulnerable rice-growing regions, where rearing facilities and IPM training were most needed. Extension workers and social scientists worked with farmers to understand farmers’ attitudes and perceptions of pest management and introduced them to the merits of using biological control and the need to reduce pesticide use in rice. 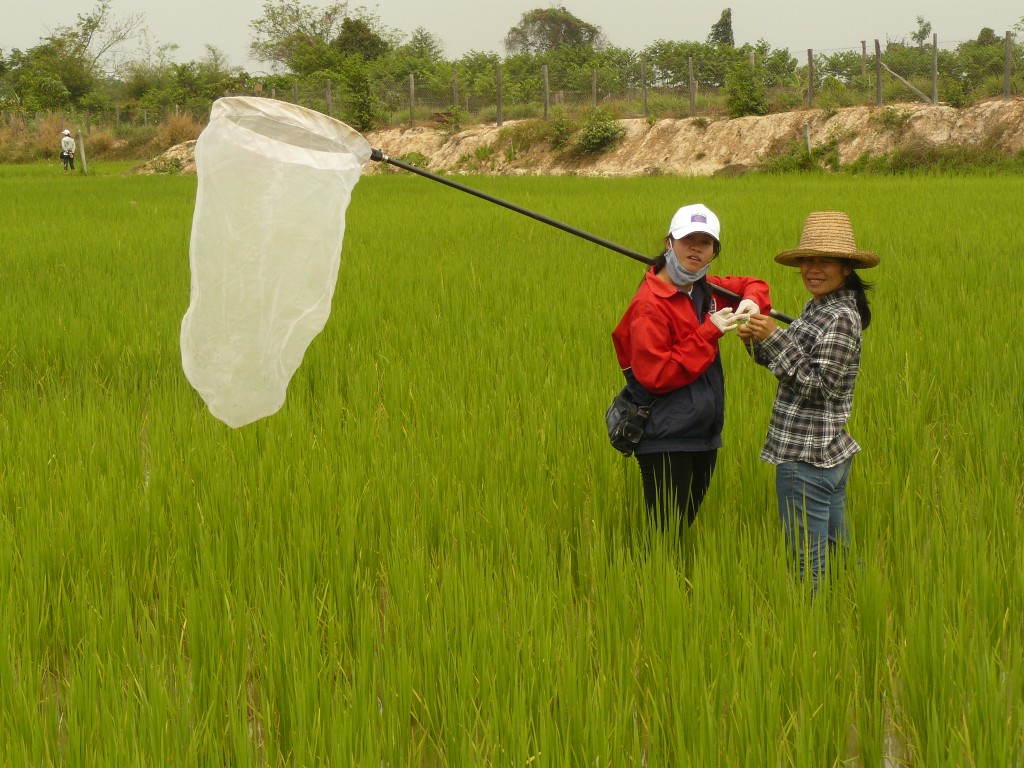 Young scientists from China and Lao PDR learn together about the ecology of beneficial rice insects (Photo courtesy of Dirk Babendreier, CABI.)

The project’s progress has been impressive. The thousands of farmers that have been introduced to this biological control method are interested and supportive. Furthermore, several national agricultural research and extension institutions have shown keen interest in adopting this biocontrol-based IPM approach. The Plant Protection Station in Guilin, Guangxi Province, China, for example, plans to initiate its own rearing facility this year.

This project is an important step forward in the huge rice bowl that is the Greater Mekong Region. Its success should encourage scientists, agricultural and extension workers, and rice farmers to initiate similar projects and better understand the importance of beneficial insects that inhabit rice fields. Although they are never seen by most people, tiny organisms like the Trichogramma wasps are the first line of defense against harmful pests. Managing the rice environment to create optimal conditions for these farmer-friends will ensure sustainable rice production along the Mekong for generations to come.