A quantitative trait locus, or QTL, is an incredibly small section of the DNA that, in the hands of critical-thinking scientists, has the potential to change the world. 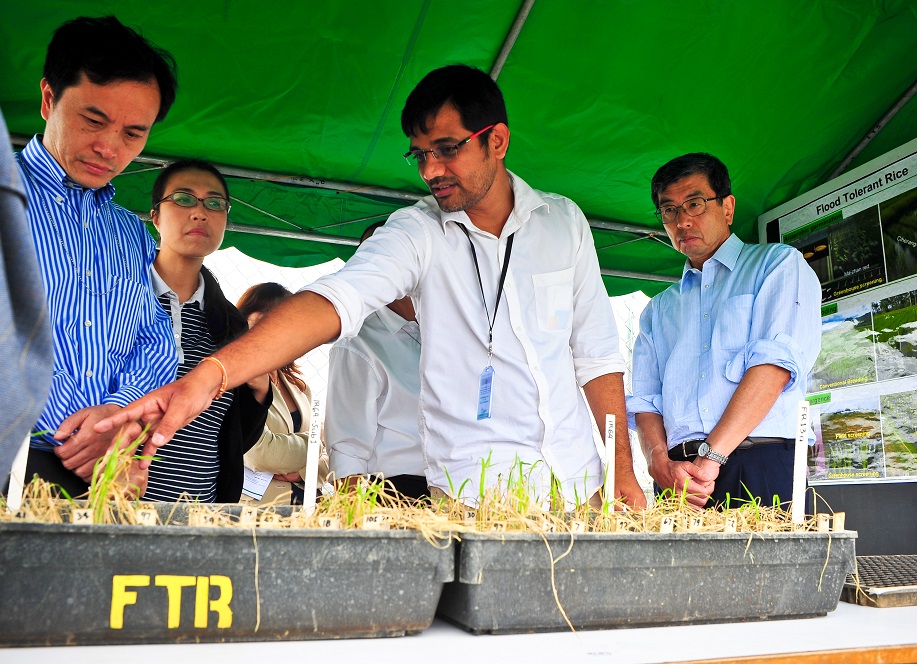 Through his research, Dr. Dixit (center) links the microscopic world of rice genes with the farmers that grow one of the world’s critically important staple crops. (Photos: Isagani Serrano)

A QTL is a segment of an organism’s DNA that contains a gene or genes linked to a particular trait. In the rice plant, for example, it can control height, built-in resistance to a particular disease, or the ability to produce more grain yield. It is within this complex inner universe of genes and DNA strands where Shalabh Dixit works in his role as a scientist at the International Rice Research Institute’s (IRRI) Plant Breeding Division. He searches for untapped genetic materials to develop new rice varieties that are tougher and more productive.

Dr. Dixit, 32, grew up in Chhattisgarh; also known as the “rice bowl” of India. His home state accounts for more than 9% of India’s total rice area and has more than 20,000 recorded rice varieties. Although he doesn’t come from a farming family, his father is an orthopedic surgeon and his mother is a retired school teacher, Dr. Dixit has rice science flowing in his veins. His passion for rice genetics is rooted in his childhood years.

“A large part of Chhattisgarh, more than 80%, is rainfed where drought is one of the major problems affecting farmers,” he points out. “Growing up there, I have seen the impact of environmental stresses. When I started doing rice breeding and drought research, I was able to immediately connect with that time back home when I saw all the problems and crop losses due to drought.”

Agriculture was not his first career choice but you wouldn’t know it based on his commitment to his chosen profession. Once he got into it, there was no stopping him. In this recent interview, Dr. Dixit talks about his work that links the microscopic world of rice genes with the farmers that grow one of the world’s critically important staple crops.

Why is your work in enabling rice to thrive under various environmental stresses important?
I am a geneticist and a plant breeder. I’ve been previously working on developing drought-tolerant rice and more recently started working on flood-tolerant rice. Our work is very important in our present-day scenario because incidences of drought and flooding are increasing due to climate change. I believe more rice varieties are required that are not just tolerant of drought but of flood and salinity as well while at the same time being resistant to diseases. Multiple stress tolerance in rice varieties is a must to ensure the stability of rice production in the increasingly unpredictable weather scenarios. It is the time to start thinking about raising the bar and developing varieties, which have a minimum set of traits that relate to yield stability and quality.

Major breakthroughs are still needed for the favorable irrigated rice environments as well but my interest has been the rainfed ecosystem. I connect better to it maybe because I have seen the problems firsthand back home. Rice yields are low in these areas. There is a big gap in terms of yield potential between rainfed and irrigated environments, which makes it important to focus on the former. These areas are also the home of the poorest farmers. If we can close this gap, even by a ton per hectare, then we can produce a lot more rice to feed future populations and make an impact targeted to the most deprived members of society.

Another new scenario in recent years is the increasing occurrence of environmental stresses in favorable rice areas. These areas need stress-tolerant varieties too because climate change will eventually affect them. For example, irrigation water is becoming scarcer. Flooding and salinity can happen in these areas as well. It looks like it is not going to be about favorable and unfavorable ecosystems individually in future. Instead, it will be about finding a set of traits that allow the varieties that have them to thrive no matter where farmers grow them.

What is the best thing about your job?
I have mostly worked in identifying and mapping QTLs and genes and developing products that contain them. A mapping population is a specific kind of population you develop by crossing two parents—one tolerant and one susceptible—primarily to identify the QTLs. It’s not necessarily to release a variety right away, however, it does happen.

For example, while we were doing the mapping, we saw some lines that looked to be very promising. We pulled out some promising lines from my mapping population, continued making selections, and a new line of drought-tolerant rice was released as a variety (IR 91648-B-20-B-3-1) in the Philippines in June 2016.

The normal process is to identify a QTL and put it in a recipient variety. Usually, we refine it more by using different breeding procedures before we actually develop a product. But that one line already had a potential for release, it just needed some selection and purification—a stroke of luck. [see a brief video featuring former IRRI breeder Peter Jennings, who made the cross resulting in IR8, about luck being the residue of design] It doesn’t happen very often when working with these complex traits in rice.

The most beautiful thing is when you put a QTL in a variety and it performs the way you want it to and it’s something new that you created. Every time I make crosses and it works when I test the progeny, it gives me the most amazing feeling. It is the feeling of developing something new that connects my genetic work with developing products that could change millions of lives in the real world!

Breeders had no idea how large the impact would be when they developed IR8, the first semidwarf variety that started the Green Revolution in rice, or the recently released flood-tolerant Sub1 lines. Now these are planted on millions of hectares around the world. I am working to develop a product with the same potential–this is the most important thing that keeps me going. Whenever I identify a QTL, develop a population or a breeding line, or conduct basic genetic work, that’s the one thought always in the back of the mind.

So far, what have been your biggest achievements at IRRI?
Locating the QTLs and the developing products with them are my biggest achievements at IRRI so far. I have developed drought-tolerant lines for Nepal using QTLs that we identified. I also helped develop drought-tolerant versions of rice varieties from India, Korea, and Taiwan. I have developed drought- and flood-tolerant IR64, which is still a popular variety in Asia, and Thadokkham1 from Lao PDR under Dr. Arvind Kumar, leader of the South Asia Plant Breeding Group at IRRI. All these lines have the potential to be released as new varieties. 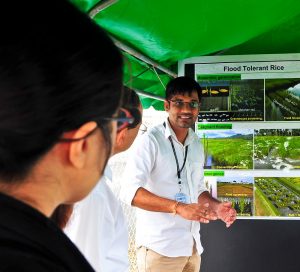 “The most beautiful thing is when you put a QTL in a variety and it performs the way you want it,” says Dr. Dixit.

What are you working on now?
I am working on developing rice that can germinate under water or AG-tolerant lines, stagnant flooding-tolerant rice, and rice that can survive even longer periods of submergence than we have now.

Hopefully, more high-yielding, good quality rice with adaptability to rainfed areas in Asia and Africa will follow in the coming years. My target is the next two years.

You said agriculture wasn’t your first career choice. When did you realize that this was the right career for you?
I realized it soon after starting my bachelor’s degree program in agriculture. But one part of it had the most impact on me. In India, there is a 6-month period called the rural agricultural work experience before you can earn your degree in agriculture. You go to a village and stay there for a semester or visit there every day and work with farmers and participate in their day-to-day activities.

I had some technical knowledge from what we studied in school. We tried to apply what we learned in the classroom in the real world during this period. Seeing how things work and learning how farmers see and do things affected my views a lot. If you think about how farmers would react to what you are about to develop, you always make a better decision. When you see the possibility of the impact you can make, it gives you a new perspective.

How important are farmers in your work as a plant breeder?
I’d like to visit the farmers who plant the varieties I helped develop. I have visited some farmers in Nepal, Bangladesh, India, and Vietnam. I still have some more to visit. Last year I went to Orissa. This is a regular process for looking at flood-tolerant lines that I do every year. We visited farmers’ fields planted with Swarna Sub 1.

I want to talk with them and listen to what they like and, more importantly, what they dislike in a variety because that will help improve the breeding program. It is the most important feedback.

Participatory varietal selection is the most important point of feedback. You may develop as many varieties as you want; but if farmers don’t like them, they won’t use them.

What is your advice to upcoming plant breeders?
You have to move from writing papers to developing actual products. Publishing papers about your work in journals is good. Finding QTLs and genes is even better. But it’s mandatory to develop products if you are a plant breeder. It is what we aim for, and this cannot stop in any way. Every plan, every vision, and every experiment should be in this direction. This is what brings the greatest value to all the basic research and genetic that work we do. We’re doing all these to help change the lives of millions for the better.