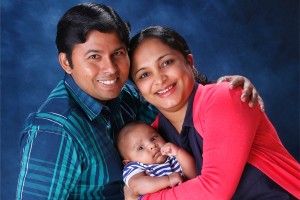 KRISHNA JAGADISH, Impa Somayanda, and their son Kanav prove that rice science and love do mix.

Krishna Jagadish and Impa Somayanda were studying at the same university in Bangalore, India, before they joined the International Rice Research Institute (IRRI) in the Philippines in 2006. But, their paths did not cross during this time. “In fact, Impa’s PhD supervisor was my teacher so we were basically taught by the same person,” said Krishna. It took at least another three years for the two to cross paths.

Close encounters of the scientific kind

In 2007, Dr. Jagadish joined IRRI as a visiting research fellow to continue working on proteomics under Dr. John Bennett . Later, he was appointed as a postdoctoral research fellow for three years. During this period, he met Dr. Somayanda. Dr. Jagadish decided to spend his Christmas of 2007 at IRRI while Dr. Somayanda, for work-related reasons, They found one another through science—and love has kept them together ever since also chose not to spend the holidays with her family. “I remember we started off as friends,” she said. “That was when we got to know each other really well.”

On one occasion, Dr. Jagadish was working on a research paper but was unsuccessful in getting the manuscript published. The paper needed some improvements in mapping what breeders call quantitative trait loci or QTLs, which are minute bits of genetic information. The problem was that, although he could map QTLs using a program that ran on the now defunct disk operating system (DOS), he couldn’t map them using a program that ran on the more advanced Microsoft Windows.

“Basically, over two weeks, she would spend her time from 6:00 p.m. till 10:00 p.m. trying to sort out aspects essential for improving the manuscript,” said Krishna. “When I resubmitted the paper, it just got accepted right away without any comments. She’s good at what she does. She’s generally a silent person, but she’s very effective. So, I guess that was one of the reasons why I secretly admired her.”

Sharing the same interest in science drew the two closer together. In 2008, they decided to marry. But, things got complicated, especially back home in India. “Impa comes from a clan which is extremely open to others outside theirs, but equally conservative when it comes to marriage,” explained Krishna. He was from Kolar, one of Karnataka’s towns, while Dr. Somayanda was from the more idyllic town of Coorg, also in Karnataka. Coorg and Kolar couldn’t be more culturally divergent. The local language, festivals, the way the people dress, and even the wedding rituals of the two towns were strikingly different.

“It was pretty challenging,” said Krishna.

It took almost a year for her parents to give them their blessing. But her mother couldn’t have been happier seeing them initiate the engagement ceremony to the marriage. “You know, after all, that’s how parents are,” Impa said.

When they got married, two separate wedding ceremonies were held, one in Coorg and the other in Kolar. Dr. Jagadish fondly recalled his surprise when they were wed in Coorg. “Across all South Indian marriages, you’ll never find meat, alcohol, or dancing,” he said. “But, during our wedding, there was a continuous flow of alcohol, loads of meat dishes, nonstop music, and dancing.”

“Throughout that whole process, which took two days, I was anxious because marrying outside our clan was rare,” confided Impa. “Fortunately, everything went smoothly. For Krishna’s relatives, everything was new. They all enjoyed it so much that they remembered it well and were able to recall their experiences whenever we met them.”

The newlyweds then exchanged vows again in Kolar.

“Our second wedding ceremony in my hometown was exactly the opposite,” said Krishna. “But, I didn’t really mind the way we got married, as long as we had the certificate to live together thereafter.”

THEY LOVE each other so much they got married twice! Krishna and Impa wearing traditional wedding attire at one of their wedding ceremonies.

The couple soon headed back to the Philippines and sett led into their new life together at IRRI after finally getting married in India.

“Having Impa as a partner both personally and professionally was like having the best possible friend,” said Krishna. “She’s very passionate about her work so that was good for our relationship. She’s happy to hear about what I do, and most of the time she would give me useful suggestions.”

They could solve a lot of work-related problems between the two of them. For example, if they were driving home for lunch, he would tell Impa any scientific dilemma on his mind. Their discussion would help him come up with ideas to work on after returning to work.

Sometimes it’s Impa who gets ideas from him. She has also received a lot of help on scientific writing from Krishna on many occasions. “He is good at it,” she noted. “Now I write much better than before after taking tips from him and also following closely how he writes.”

Earlier in their careers, both of them tried going into genomics—studying how plant mechanisms work at the molecular level. But they quickly realized that this wasn’t their cup of tea.

“So I just moved back into my area of specialization and it’s the same with Impa also,” said Krishna. “After a few attempts to get into the molecular side of research, she quickly realized that her strength was in physiology and she has from then on stuck to her strength.

“We went back to actual physiological understanding of plants rather than focusing exclusively on things at the molecular level, which we manage through internal and external collaborations,” he added.

“Krishna started here at IRRI as a PhD student,” said Impa. “Now, he serves as a scientist and deputy division head of the Crop and Environmental Sciences Division. He manages around 20 people and has made some progress with his research on high day- and night-time temperature stress in rice. But, I think there’s still a long way to go.

“I work as a project scientist on physiology and soil chemistry of zinc uptake, transport, and loading into rice grains,” she continued. “We love the kind of work that we do and the people we work with and that’s what has kept us going at IRRI all these years.”

On 2 January 2014, Krishna and Impa fulfilled a lifelong wish. It wasn’t a scientific discovery, but a healthy baby boy they named Kanav, which means “dream fulfilled” in Sanskrit. “I remember watching a Bollywood movie and then I heard the name ’Kanav’ from one of the characters,” said Impa. “I liked it the first time I heard it so I decided to look it up on the Internet. After I learned what it meant, I told Krishna. He liked it so we decided to go for it.”

Ms. Ferrer is a science communication specialist at IRRI.