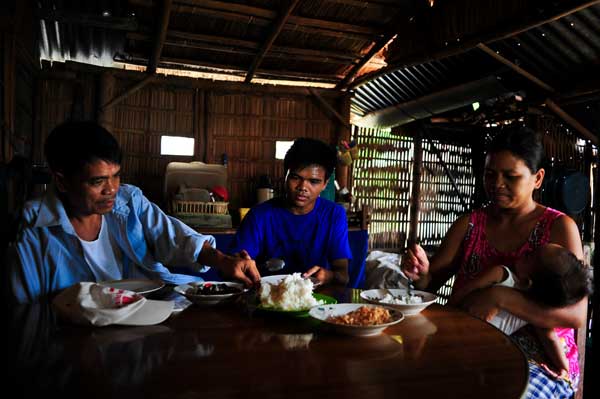 The Food and Agriculture Organization (FAO) of the United Nations has declared 2014 as the International Year of Family Farming (IYFF). The International Rice Research Institute (IRRI) applauds the goals of the IYFF, which are to raise the profile of family farming and smallholder farming by focusing the world’s attention on their significant role in eradicating hunger and poverty, providing food security and nutrition, improving livelihoods, managing natural resources, protecting the environment, and achieving sustainable development, in particular in rural areas. Certainly, these objectives mirror what IRRI strives to help achieve as well.

As pointed out in the 4th edition of the Rice Almanac just released, rice is grown on some 144 million farms worldwide, mostly smaller than 1 hectare. Obviously, 2014 will be a very special year for the millions of rice-farming families who depend on growing the staple for their daily needs as well as their future. So, in our magazine’s first issue for the year, we are pleased to bring our readers’ attention to the challenges that face smallholder farmers everywhere.

For example, in this issue’s Grain of Truth, former IRRI Director General M.S. Swaminathan explains the need for a better understanding of what smallholder farmers need and the future of small-scale agriculture. Bas Bouman, director of the Global Rice Science Partnership (GRiSP), proposes a strategy to bring smallholder farmers in Asia out of poverty by increasing “virtual” farm size (Modernizing Asian Rice Production).

In Shaping the future of rice, Rice Today‘s managing editor writes of how public and private sector institutions are coming together to find solutions to the challenges faced by the rice sector in creating a better life for both consumers and producers. Representatives of these institutions offer some interesting perspectives for developing better policies, technologies, and innovations and, most importantly, improving collaboration among stakeholders.

A great example of IRRI’s partnership with both the public and private sectors in a single project is illustrated in the feature on pages 18-19, The bubble that dries. It tells how the private company GrainPro Inc., the University of Hohenheim (UHOH) in Germany, and IRRI have worked together to develop an inexpensive grain dryer that will help small-scale farmers in the Philippines and elsewhere dry their rice crop more effectively and efficiently.

As we all know, improved varieties play a strong role in producing more even in flood-, drought-, and salinity-prone areas. In Sowing their choices, we learn how farmers in Myanmar are deciding on the kind of rice that they will plant in their fields. And, in his Rice Facts installment, Sam Mohanty reports that many farmers in Odisha, India, have adopted an IRRI-developed flood-tolerant Swarna-Sub1 not only for food but also as a worthy offering in their religious rites.

In addition to protecting the environment, helping smallholder farmers in Vietnam profit more is another reason why IRRI and other organizations are urging far less use of pesticides. K.L. Heong, a leading expert on ecological engineering, shares how he has devoted more than 25 years to weaning farmers from their heavy dependence on pesticides and helping them improve the management of rice pests instead to reduce their crop losses. (See Vietnam turns back a tsunami of pesticides on pages 12-13 and Reducing pesticide use in Asia’s rice fields: the job is far from finished.)

And, while on the subject of Africa, without a doubt, one of the prime movers of rice science on the continent is Papa Abduolaye Seck. A staunch advocate of research for Africa’s development, his conviction that Africa would either develop through science and technology or not develop at all has transformed the continent’s rice sector into a thriving industry that has yet to reach its full potential. Read about this pioneer’s contributions.

Finally, the goal of helping smallholder farmers get out of poverty and secure their livelihood in a sustainable way can be better achieved by partnering between governments and institutes such as IRRI. This is made clear in Myanmar rises. Over the last half century, IRRI has been working with researchers, extension workers, and farmers in the country. Myanmar President U Thein Sein recently visited IRRI headquarters to personally solidify the Myanmar-IRRI partnership to help his country regain its former stature as one of the world’s top rice exporters.

I hope you enjoy reading these and other features in this issue and that you have a happy and prosperous year ahead.