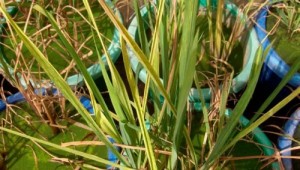 The reaction of different rice varieties to a highly virulent form of RYMV collected at Parakou, Benin. Although some lines were killed, others showed only typical symptoms on their leaves. (Photo: Yacouba SÉrÉ)

Unique to Africa, rice yellow mottle virus (RYMV) has become the continent’s most rapidly spreading disease of rice since it was first discovered in Kenya in 1966. It has the potential to devastate lowland and irrigated rice throughout Africa, contributing to food scarcity in areas where rice is an important staple food.

“Unfortunately, all rice varieties traditionally grown in irrigated conditions and in lowland areas of Africa are susceptible to RYMV,” says Africa Rice Center (WARDA) plant pathologist Yacouba Séré. “It is therefore a major threat to more than 3 million hectares of rice in sub-Saharan Africa.”

Rice farmers in the region have been worried ever since severe RYMV epidemics broke out in West Africa—the main rice belt in sub-Saharan Africa—in the 1990s, primarily because of the adoption of intensive rice cultivation methods, including irrigation, monocropping, and high-yielding but highly susceptible Asian rice varieties.

The disease is transmitted by insect vectors, such as beetles and grasshoppers, or mechanically through injury to plants during hoe-weeding or transplanting in the presence of virus particles. The symptoms of RYMV-affected plants are stunted growth, mottled yellow leaves, reduced number of tillers, and sterile grains.

The best hope for significantly reducing the impact of RYMV lies in the use of resistant varieties in complement with measures such as direct sowing, removal of alternative hosts on which virus populations can survive during the off-season, and control of the insect vectors.

In response to strong demand from West African countries that were badly affected by the RYMV epidemic, WARDA took the lead in the mid-1990s to conduct research on the disease on a regional basis, building on the RYMV resistance screening work of the International Institute of Tropical Research.

As a result, a regional research strategy to address RYMV was developed and implemented with support from the UK Department for International Development, using an integrated pest management (IPM) approach. The main objectives of this strategy were to identify rice varieties resistant to RYMV to replace susceptible varieties grown by farmers; identify and characterize sources of resistance for use in breeding programs to develop resistant varieties; and understand better the disease epidemiology.

The high variability of the RYMV virus—meaning that virus strains vary from location to location—proved a major challenge for scientists because a rice variety that is resistant in one location may be susceptible elsewhere.

Over the past few years, however, scientists have made several important advances.

Ken Bugul Jaiteh (right), research technician at the National Agricultural Research Institute , The Gambia, receives a certificate for completing a training course on molecular biology techniques at WARDA as part of the USAID-funded project on RYMV. (Photo: R. Raman)

A rapid tool for diagnosing RYMV using antibodies (an immune response from animals and plants in response to virus particles) has been developed and shared with project partners. Several RYMV strains were identified and characterized. Rice varieties with resistance to RYMV have been identified and sent to national partners for testing. Most importantly, a few sources of high resistance to RYMV, such as Gigante, a traditional low-yielding rice variety from Mozambique, and several indigenous African varieties have been identified. Resistant lines were obtained through backcrossing, some of which have already been adopted by farmers.

One of its important partners in this area is the Institut de recherche pour le développement (IRD) in France, which has identified a gene, rymv1, that confers RYMV resistance and molecular markers associated with it. A marker is a segment of DNA linked to an allele (a version of a gene) that controls an important trait and can easily be detected in the lab.

This achievement led to the launching by WARDA in 2004 of a 3-year project on marker-assisted selection (MAS) with support from the U.S. Agency for International Development to train national staff of four West African countries—Burkina Faso, Guinea, Mali, and The Gambia—in the application of MAS techniques to transfer the gene with RYMV resistance to popular rice varieties. (MAS involves linking a desired gene with a marker so that it can easily be bred into a rice variety.)

Thanks to this innovative project, WARDA’s national partners are benefiting in several ways. The resistance gene rymv1 has been successfully transferred into various West African popular varieties that were previously susceptible to RYMV and rice seeds bearing the rymv1 allele have been produced from the best lines. These seeds have been multiplied to produce enough seed for distribution to project countries for evaluation and use in national breeding programs.

Perhaps most significantly, the project has substantially boosted participating countries’ research capacity. Eight scientists from the project countries underwent intensive hands-on training in the use of molecular techniques in their plant breeding programs. Functional biotechnology laboratories have been established in each of the four countries and 27 national scientific staff, including women, have been trained to use the laboratory equipment. To further increase the biotechnology capacity of Africa, students from Benin, Burkina Faso, Côte d’Ivoire, and Niger are doing their Ph.D. studies on RYMV under WARDA’s supervision.

According to Marie-Noelle Ndjiondjop, WARDA molecular biologist, who is heading the project, this is the first time that national programs in the project countries have had access to laboratories equipped for this sort of science.

“The legacy of this project,” says Dr. Ndjiondjop, “will be the availability of laboratories furnished with the equipment necessary to apply molecular biology techniques to rice breeding, as well as trained national staff who can apply these techniques across many different crops.”

For the trainees—such as Ms. Ken Bugul Jaiteh, research technician from the National Agricultural Research Institute, The Gambia—the project has been valuable in building national research capacity in biotechnology. This will help them identify and adapt the technology to their country’s needs and constraints.

The potential benefits of the project are expected to go far beyond the four project countries to reach all the African countries that grow rice and could eventually turn the tide in the battle against the disease.