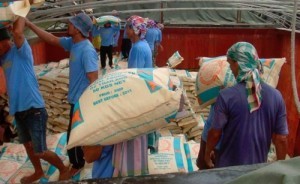 Parboiled rice is loaded at a riverside dock in Bangkok. It will be hauled down the Chao Phraya River to the Gulf of Thailand, to be loaded aboard cargo ships bound for Africa. (Photo: Bob Hill)

International rice trading is not a business for the faint-hearted. Thailand’s exporters knew that well. They also knew, when they prepared in November 2007 for what was supposed to be a boom year ahead, that prices were likely to rise. Little did they realize how steep that rise would be.

Poor weather and domestic supply concerns had severely restricted competition on the world’s markets from Vietnam and India, Thailand’s main export rivals. China, Egypt, and Australia had also restricted their rice exports. So, 2008 amounted to a one-horse race, and, as the 2007 harvest began to roll in from the fields, Thailand’s exporters began their wheeling and dealing, with buyers clamoring at the door.

“You can only make money if you speculate properly,” says veteran exporter and former president of the Thai Rice Exporters’ Association Vichai Sriprasert. “At the time of the deal, we expect to make $5 a ton. Nobody has 100% of the stock in hand. We hope to buy the rest. If I end up making $1 per ton, then I’m happy with that.”

It was their forward-orders practice that let them down, in a sellers’ market the likes of which they had never experienced before. Local and export prices were soaring, even as they struck their deals to deliver in three or four months’ time, when they still had to buy the rice they had just sold. In some cases, the small profit margins they were happy to accept disappeared within a few hours. Then, they could only watch in despair as the spiraling prices battered at their solvency. In order to honor their commitments, some were forced to buy milled rice at a ruinous US$200 per ton more than they had agreed to sell it.

In the few months from November to February, 30 to 40 exporters, many of them among the country’s most experienced traders, lost an estimated $128 million.

Worse still, supplies of paddy (unmilled rice) all but dried up in late February, leading to claims that farmers and millers were hoarding it to speculate on even higher prices. The government ordered an official check of its own stocks after the discovery that 12,000 tons of paddy had “disappeared” while in the storage custody of millers, and exporters scoffed that 12,000 tons was the tip of a very large iceberg. The accusations rumbled back and forth through a shell-shocked industry, bleeding on the one hand and profiting on the other. At the same time that many exporters faced heavy losses, farmers, local paddy traders, and many millers profited like never before.

Unable to find supplies and badly scared, many of Thailand’s smaller exporters withdrew from trading in March, to brood and wait for the second crop to come in, later that month and in April. Others cautiously accepted orders no more than one month in advance.

Had they kept an eye on world food prices, they might have been forewarned. The price of wheat has doubled since April 2007 and the food price index of the United Nations’ Food and Agriculture Organization climbed by almost 40% in 2007. Demand is outpacing supply and the world’s stocks of cereals like rice are dwindling to the point at which they can no longer provide an effective buffer in years of poor production.

Although population growth is the fundamental cause, the production and pricing problems are also partly due to weather problems linked to climate change as well as rising oil prices boosting demand for biofuels. Changing diets in fast-developing countries such as China are also a factor, with more land needed to raise livestock to meet increasing demands for meat.

“The force of the technology that created the Green Revolution has run out,” says Mr. Vichai. “World stocks of rice have been falling for 4 or 5 years, and consumption of rice exceeds production. This is a very dangerous situation. We need a new level of technology in the rice fields of the world, so that we can meet the demand.”