It has been well documented that the Asian Green Revolution (GR), which began in the 1960s with the introduction of modern, high-yielding rice varieties, has contributed to poverty alleviation by reducing the real rice price on the world market by more than half without depleting producers’ profit. The poorest of the poor, such as urban laborers and rural landless and marginal farmers, have benefited most from this price reduction because they are net buyers who spend a large portion of their income on staples.

An emerging consensus from recent research is that the GR had an impact on not only the generation of farmers who directly benefited but also on multiple succeeding generations. It has become clear that the GR produced longterm benefits much greater than those mentioned above, including a reduction in childhood malnutrition, which affects people for their entire life and is thus considered more serious than adult malnutrition (also see Do rice prices on page 37 of Rice Today  Vol. 5, No. 3).

Another less-recognized benefit is improved children’s education. Several recent studies, including one by the International Rice Research Institute (IRRI), reveal that the GR vigorously enhanced schooling investments for children—often considered a luxury many poor cannot afford. Agricultural development catalyzed by the GR led to an initial growth in farm income, which accelerated parents’ schooling investments for their children, resulting in further income growth via educated children’s participation in the relatively lucrative nonfarm sector. Thus, the GR contributed to faster poverty alleviation for the children of GR farmers. affect malnutrition in the poor? 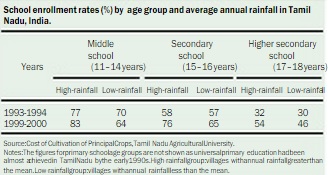 The Indian state of Tamil Nadu offers an example of how the GR has increased schooling investment. For farmers in many parts of the state, farming depends on rainfall-supplemented irrigation systems or direct rainfall. Therefore, the GR increased farm income the most in areas that received sufficient rainfall. The table shows that, as expected, areas with higher average rainfall (thus, higher farm income) have achieved faster growth in school enrollment rates.

However, there are concerns that such GR-led educational progress makes farm families in favorable areas wealthier, but leaves the poor in unfavorable areas behind. Nevertheless, the Tamil Nadu data, which also show that the income gap between the high- and low-rainfall areas has narrowed, contradict this. What is happening?

The increase in nonfarm job opportunities in unfavorable farming areas is also a key to income growth, given the disadvantages of farming such land. In particular, the expansion of unskilled or semiskilled job opportunities (jobs in household goods factories or in the rural service sector, for example) is important for the uneducated in unfavorable areas. And, to this end, there is evidence that the GR-driven development of the agricultural sector contributes through increased demand for nonfarm products and services in rural areas. Indeed, nonfarm industries are often established in agriculturally unfavorable areas a moderate distance from urban centers, where they can take advantage of lower wage rates without losing their access to markets. Thus, the GR has had an indirect positive effect on income growth in unfavorable areas.

The link from the GR to the development of the nonfarm sector and then to income growth in unfavorable areas therefore provides another example of a long-term indirect impact. More research is required to confirm this link, but, if confirmed, the long-term benefits of the GR would be boosted even further.