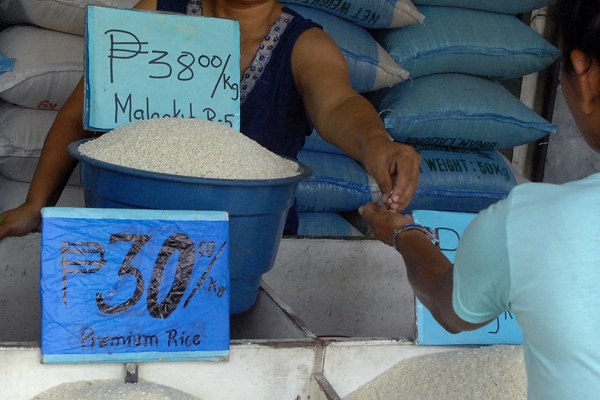 In the wake of the world food price crisis of 2007-08, the consensus view is that, because of several trends (climate change, biofuels, scarcity of land and water, increased consumption of meat), we are entering a new era in which food prices will be higher. How has this played out so far in the case of rice?

Cheaper on the world market

But even these numbers overstate the extent of effective changes in world prices, because the currencies of most Asian countries appreciated in real terms vis-à-vis the U.S. dollar by 10–20% during this time, thus mitigating the extent of the world price increase. When real exchange rates appreciate, that means it is cheaper to buy products on the world market in local currency. Thus, for all large Asian developing countries, the opportunity cost of Vietnamese rice in real local currency terms in 2013 (i.e., after adjusting for inflation and real exchange rate appreciation) was about equal to or lower than it was in 2007 before the crisis.

Simply put, this means that, for those who need to purchase it, rice was cheaper in 2013 than it was before the crisis in 2007. And, world market prices have fallen even further in the first few months of 2014.

Despite the constant or lower opportunity cost of rice on the world market, domestic rice prices increased in real terms in these same countries from 2007 to 2013 (see figure). One of the key recent developments in the Asian rice economy has been the increase in buying prices paid to farmers in some countries. This trend has been particularly pronounced in Thailand and China, where buying prices paid to farmers have increased by 92% and 59%, respectively, over the past 6 years. In contrast, buying prices in India have increased by 17%, while in Bangladesh they have increased by only a modest 6% (all changes are in local currency terms, adjusted for inflation). In both Thailand and China, broader measures of domestic rice prices have also increased substantially: comparing 2013 with 2007, wholesale market prices increased by 20% and 38%, respectively, in real terms. These large increases took place although the baht and the yuan have appreciated by more than the world price of Vietnamese 5% broken has increased. In other words, the opportunity cost of rice on the world market has actually declined in real local currency terms for both of these countries.

Why have domestic prices increased so much in these two countries? Both of them have witnessed exceptional economic growth rates over the past few decades, leading to a structural transformation of their economies. At the same time, the share of agriculture in employment remains well above its share in gross domestic product (GDP), meaning that agricultural producers and workers are less productive—and have lower incomes—than those in other sectors of the economy. This economic change is difficult for many people who rely on farming as a key source of income—and add to this the fact that China and Thailand have the highest income inequality in the region. Thus, these countries are raising domestic prices to provide more support to farmers and to reduce inequality, both politically popular. China has also carried out other measures to support farmer income, such as cash transfers and income tax exemptions.

A second key development in recent years has been the push toward self-sufficiency in the wake of the world rice price crisis, especially by Indonesia and the Philippines, which are traditionally the largest importers in the region. These two countries have occasionally lowered their rice imports during the past decade although domestic rice prices have been well above prices on the international market. This push toward self-sufficiency has meant that domestic prices in these countries are rising even higher: rice prices in the Philippines in 2013 were 16% higher than they were in 2007, and 17% higher in Indonesia (both after adjusting for inflation). In Indonesia, local prices in 2013 were 88% higher than the average during 1975-95, when domestic prices were stable around the trend of world prices.

The rising prices in these two countries are partially due to the same factors of structural transformation in China and Thailand, but also because their status as traditional importers makes them more vulnerable to fluctuations on the international rice market—a market that is now viewed as more unstable than in the wake of the food price crisis.

The trends of rising domestic prices are not found everywhere in the region—prices have declined in poor countries such as Vietnam, Lao PDR, and Nepal. Prices have increased, but by small amounts, in other poor countries such as Bangladesh and Cambodia. Because these countries are substantially poorer than the countries discussed above, they are less advanced in the process of structural economic transformation. Their income inequality is also generally lower.

When domestic prices are higher

What are the consequences of higher domestic prices? Higher domestic prices are not generally good for poverty as they harm poor rice consumers (who in countries such as Indonesia and the Philippines are the poorest of the poor). Even in exporting countries such as Thailand, most of the benefits of higher prices end up with the farmers with the most land because benefits accrue only when marketed surplus is sold. Higher rice prices can also raise workers’ wages to compensate for the higher food prices, thereby reducing the competitiveness of the industrial sector without benefiting workers. Although higher domestic rice prices may eventually be inevitable, as in Japan and Korea, the rise in domestic prices in some ASEAN countries is probably happening too early in the development process.

These costs are important to note, but political imperatives often dictate that farmers must be supported in some way. In this case, it is important to design programs that transfer the needed financial resources at the lowest possible cost, avoiding excessive losses due to leakage to people who are not poor. It is also desirable to avoid large distortions in resource allocation that delay agricultural diversification. Some types of cash transfer programs, either unconditional or conditional on school attendance, may help in this regard.

What do rising domestic prices mean for the world rice market? As domestic prices increase above world market prices in some countries, farmers are encouraged to produce more rice and consumers to buy less. These added supplies and lower demand mean fewer imports from some countries, and eventually more exports from others (assuming the rice is not allowed to rot in storage). These trends will lead to downward pressure on international prices, possibly negating the consensus view that we are now in a new era of high world rice prices.

Lower world prices in turn will make it harder to continually finance the high domestic farm prices. Many developed countries can afford such subsidies because their agricultural sector is a much smaller share of the economy. They can provide substantial benefits to farmers without undue strain on the government budget. But, the opportunity cost of subsidies is much higher in poor countries, and it is not clear whether such subsidies are sustainable—witness the recent unwinding of the paddy pledging program in Thailand (see more on the Thai situation in The global rice market winks at El Niño and Thai problems). If such subsidies do not continue, the world price, after falling for a time in the near term, will then eventually rise again.

Dr. Dawe is a senior economist in the Agricultural Development Economics Division of the Food and Agriculture Organization of the United Nations.