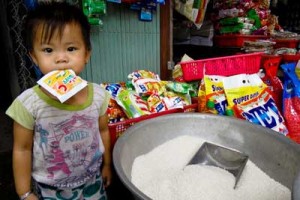 There is a clear and present danger that another global food price crisis will emerge sooner rather than later. A key signal is the lackluster result of the December 2013 Ninth Ministerial Conference of the World Trade Organization (WTO) in Bali, Indonesia—in the heart of the ASEAN community.

India’s passage of its sweeping National Food Security Act in 2013, which requires immense food stock-piles and subsidies (see India makes access to food a right, not a privilege), and Thailand’s maintenance of its costly rice pledging scheme are examples of domestic programs and policies that have prevented global multilateral trade reform from proceeding at a much more significant pace.

Another ASEAN member— Myanmar—recently emerged from isolation and has begun to explore its capabilities to re-assume its place as the world’s largest exporter of rice, as it was in the 1950s (see Myanmar rises).

And Singapore, too small to produce the high-quality rice its wealthy and growing population wants, relies almost completely on trade. This underlines the importance of durable and reliable regional agreements on rice production and supply.

Many ASEAN populations were badly affected by the global food price crisis of 2007-09. A clear lesson from the crisis is that knee-jerk reactions of some countries worsened the problem overall and their particular situations. Unilateral actions exacerbated the food price increases. Although the sovereign actions were intended to deal with domestic food price inflation, these sparked dynamic interactions that led to a spiral of higher prices across the region and the world, since countries and economies are inextricably and unavoidably ever more linked, and actions in one country have impacts on all.

For example, by enacting controls on rice exports, exporting countries hurt their own rice farmers. Trade controls do not allow price signals to be fully transmitted from the international to the farm level. Thus, the poorest farmers do not gain from higher commodity prices and the poorest consumers do not benefit from lower-priced imports.

Moreover, the spiral in rice prices exacerbated hunger in countries that needed help the most—particularly the hungry populations of North Korea, Sudan, and many other pockets of deprivation in many parts of the world—prompting the UN Secretary-General to issue a “global food emergency” warning.

Since the most recent food crisis, efforts among ASEAN members have been redoubled to strengthen their domestic capacity to manage their food supply. And, ASEAN members have begun to shore up agreements and platforms to share food security information and mechanisms for regional benefit.

The ASEAN already has a base to build a framework for multilateral dialogue and collaboration in the management of food supplies and prices. Since the 1970s, the ASEAN has been, in fits and starts, organizing and tinkering with the ASEAN Food Security Reserve—an agreement among members to set aside and share rice stocks in contingencies such as what is now being experienced.

Recently, ASEAN leaders adopted the ASEAN Integrated Food Security (AIFS) Framework and the Strategic Plan of Action on ASEAN Food Security (SPA-FS) at the 14th ASEAN Summit in 2009. The AIFS Framework and the SPA‑FS were set for a 5‑year period (2009-13) and “provided measures, activities, and timelines to facilitate cooperation in the implementation and monitoring process.” Four components made up the AIFS: (1) food security and emergency/shortage relief, (2) sustainable food trade development, (3) an integrated food security information system, and (4) agricultural innovation.

The International Rice Research Institute (IRRI) was asked in 2009 by the ASEAN to focus its contribution to the AIFS and SPA-FS on component 4 (agricultural innovation), which in turn was made up of three strategic thrusts: (1) promote sustainable food production, (2) encourage greater investment in food and agro-based industry to enhance food security, and finally (3) identify and address emerging issues related to food security. Thus, the AIFS and SPA-FS included a Rice Action Plan proposed by IRRI.

As part of the Rice Action Plan, the Senior Officials Meeting of the ASEAN Ministries on Agriculture and Forestry (SOM-AMAF) were tasked to work with IRRI on the following: (1) better crop management practices, (2) testing new rice varieties developed by IRRI, and (3) training young scientists and researchers at IRRI.

Globally, the Rice Action Plan for ASEAN has been implemented by IRRI through the Global Rice Science Partnership (GRiSP), the CGIAR Research Program on Rice.

Launched in 2010, GRiSP represents for the first time a single strategic work plan for global rice research. GRiSP brings together hundreds of scientists from across the world in the most comprehensive attempt ever to harness the power of science to solve one of the most pressing development challenges of the 21st century. GRiSP aims to reduce poverty and hunger, improve human health and nutrition, reduce the environmental footprint, and enhance ecosystem resilience of rice production systems through high quality international rice research, partnership, and leadership.

GRiSP plans to achieve these important goals by fostering high-quality, impact-oriented research and development activities. The key entry points for achieving this mission lie in lifting the productivity and resource efficiency of rice production systems to unprecedented levels. This will enable farmers to enter a virtuous circle, allowing them to also invest more in diversification and sustainable management practices.

To achieve impact at scale, GRiSP scientists collaborate with hundreds of development partners from the public and private sector across the globe. Together, they align and bring to the table consortia, networks, platforms, programs, and collaborative projects with more than 900 partners from the government, nongovernment, public, private, and civil society sector.

At the 35th AMAF meeting in Kuala Lumpur in September 2013, the ministers appreciated IRRI’s report on the progress of GRiSP, noting: “… the contribution of GRiSP to support the AIFS and SPA-FS to ensure rice would be affordable to poor [consumers], yet profitable to farmers, of better quality, and [have] nutritious value.”

The Ministers recalled their “… earlier approval by AMAF in 2011 and considering the need to maximize the impact of collaboration and cooperation with development and donor partners as well as taking into account the ongoing ASEAN initiatives, the Meeting agreed to continue supporting GRiSP to accelerate rice productivity and quality in the region. The Meeting tasked the SOM-AMAF with assistance of the ASEAN Secretariat to work with IRRI on the implementation of the initiative.” In this regard, IRRI will work with SOM-AMAF to secure the resources necessary to implement GRiSP across the ASEAN region.

The result of the 35th AMAF meeting echoes that of the 33rd AMAF meeting in Indonesia in 2011, which expressed the AMAF’s “… support for GRiSP, led by the IRRI, as it represents an important expansion and development of 2008’s ASEAN Rice Action Plan.”

Moreover, the 34th AMAF meeting in Laos in 2012 issued the following statement: “We, while noting the good progress in the implementation of the ASEAN Integrated Food Security (AIFS) Framework and the Strategic Plan of Action on ASEAN Food Security (SPA-FS) (2009-13), including the entry into force of the ASEAN Plus Three Emergency Rice Reserve (APTERR) Agreement, agreed to remain vigilant on the opportunities and challenges of food security in the region and the world, particularly at a time of high volatility of commodity prices and economic uncertainties. Moreover, we agreed to continue building on existing mechanisms and exploring new initiatives that contribute to food security in the region… With the continuing support from … GRiSP, led by IRRI.”

To meet its goals in Southeast Asia, GRiSP is structured as six interconnected research and development themes:

Theme 2: Accelerating the development, delivery, and adoption of improved rice varieties for farmers in Southeast Asia;

Theme 5: Providing technology evaluations, targeting, and policy options for enhanced impact in the rice sector in Southeast Asia; and

Theme 6: Supporting the growth of the rice sector in Southeast Asia.

GRiSP offers all ASEAN members a comprehensive set of interventions and tools to capture the advances in global science for deployment in their individual national rice research and extension systems. While GRiSP’s interventions and tools can be tweaked to suit the specific challenges faced in each country, its thematic approach serves as a shared framework that facilitates multilateral coordination and cooperation.

Indeed, multilateral cooperation and action mindful of dynamic impacts are crucial to curbing volatility in rice and food prices. The governments of ASEAN members, especially those of importing and exporting countries, must share information on cross-country stocks and prospects that enable rational, moderate, and longer-term assessments of supplies and prices.

Such dialogue will underlie international understanding and assurances that both rice exporting and importing countries have a shared interest in stable, if higher, rice prices. Food prices will likely settle at higher levels than experienced since the mid-1970s, and this augurs well for farmers and long-term higher total world supplies.

It is high time that GRiSP and other comprehensive programs, and continuing shared food security discussions, are accelerated and implemented for the benefit of all.

Dr. Tolentino is the deputy director general for communication and partnerships at IRRI.