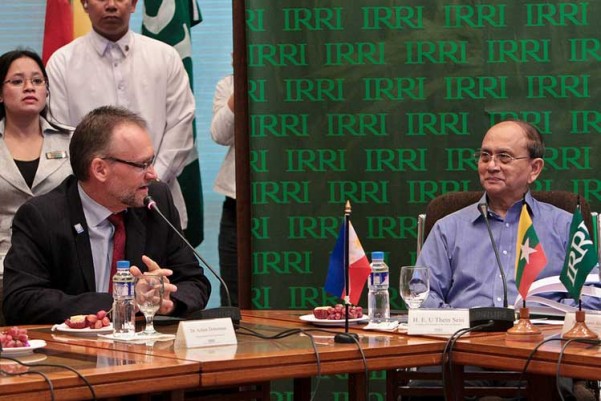 When President U Thein Sein visited the International Rice Research Institute (IRRI) headquarters in the Philippines in December 2013, he commended the decades-long partnership between IRRI and his country.

Since 1965, IRRI has been involved with researchers, extension personnel, and farmers in Myanmar in introducing rice breeding material, hybrid rice technology, and locally adaptable designs of rice transplanters and threshers. The rice variety IR8, which marked the beginning of the Green Revolution, was introduced in Myanmar in 1967.

But, given today’s challenges and opportunities that abound for the country that could emerge as the next major rice producer in the world, President Sein called for an even stronger partnership, setting the tone for years of future collaboration.

Myanmar has 60 million people and grows rice on 7.6 million hectares per year. The major rice-producing regions are in the delta, including Ayeyarwaddy, Bago, Yangon, and Mon states. These four areas make up more than half of the monsoon crop. The country’s major rice ecosystems are rainfed lowland rice, deepwater submerged rice, irrigated lowland rice, and rainfed upland rice.

In 2011, production was approximately 29 million tons, the seventh highest in the world, behind Vietnam and Thailand.

A president and a farmer

As someone who starts his day checking on his farm before attending to affairs of the state, President Sein said that he came to IRRI as president—and as a farmer who knew firsthand the problems in the country’s rice sector.

“Our country has different topography and agroecological zones,” the president said. “We need rice varieties that respond to challenges from these difficult environments.” He asked IRRI to develop more improved rice varieties suitable for the unfavorable environments of the hilly and dry regions in the north, and the wet, frequently flooded areas in the southern part of the country.

“Flooding is a serious problem in Myanmar, affecting 14% of all our rice areas,” said Daw Tin Tin Myint, director of rice research at the Myanma Department of Agricultural Research. “We have released submergence-tolerant Swarna-Sub1 to our farmers, but we also face another problem during monsoon seasons— salinity. With the help of IRRI, we are trying to develop varieties that can tackle both flooding and salinity.”

To date, IRRI has released 69 improved rice varieties in Myanmar. Most of these are suited for rainfed and irrigated lowlands. Others are for the upland ecosystem and areas prone to drought, deep water, and salinity.

Partnerships with the private sector have resulted in the adoption of more than 50 IRRI-developed flatbed dryers across the country. Around 7,500 farmers are benefiting from these dryers for better rice quality that commands higher prices.

“We are self-sufficient in rice, so we export our surplus to help our neighboring countries,” he said. But, the president expressed Myanmar’s hope to once again become a leading global player in the rice market.

“IRRI, being the premier rice research facility in the world, and considering how much help the country has received in terms of technology, I think IRRI can really help Myanmar,” said Putu Kamayana, head of the Asian Development Bank (ADB) Extension Mission in Myanmar. ADB works with IRRI and Myanmar national partners to promote sustainable pest management, particularly in the area of ecological engineering (see Reducing pesticide use in Asia’s rice fields).

“Rice is Myanmar’s most important crop,” said Nick Austin from the Australian Centre for International Agricultural Research (ACIAR). ACIAR and IRRI are working with farmers in the country’s upper delta to help raise their productivity. “We believe that there are exciting research opportunities to help smallholder rice farmers grow more rice and diversify into other crops to improve their profit.”

Tin Htut, director of Yezin University in Myanmar, and one of the 2010 outstanding IRRI alumi, also believes IRRI can contribute a lot to Myanmar’s transformation.

“We’ve been working together for decades, and IRRI has a lot of support here in Myanmar,” said Dr. Htut. “Our strong relationship can be gleaned from the fact that 80% of the country’s rice areas are grown with IRRI-bred varieties.”

In the coming months, IRRI and partners from the Ministry of Agriculture and Irrigation will finalize the Myanmar Rice Sector Development Strategy—the road map to Myanmar’s plan to become a global player in the rice market. The strategy was developed in September 2013 when the Myanmar government gathered its partners in Nay Pyi Taw, a government center about six hours from Yangon.

IRRI, along with donors and national agricultural agencies, discussed points of collaboration in mapping out a strategy to revive Myanmar’s rice sector, and regain its former stature of some 50 years ago when it was the leading rice exporter in the world (1960-63). Other partners in Myanmar are the Consortium for Unfavorable Rice Environments–International Fund for Agricultural Development, Closing Rice Yield Gaps in Asia-Swiss Agency for Development Cooperation, the Livelihoods and Food Security Trust Fund, and the United States Agency for International Development in projects led by IRRI scientists David Johnson, Grant Singleton and Madonna Casimero.

This strategy is built around successes that have already been achieved in the country, as well as current and emerging problems due to climate change, and the management of diminishing natural resources. All these point toward improving rice farmers’ livelihood and increasing their income.