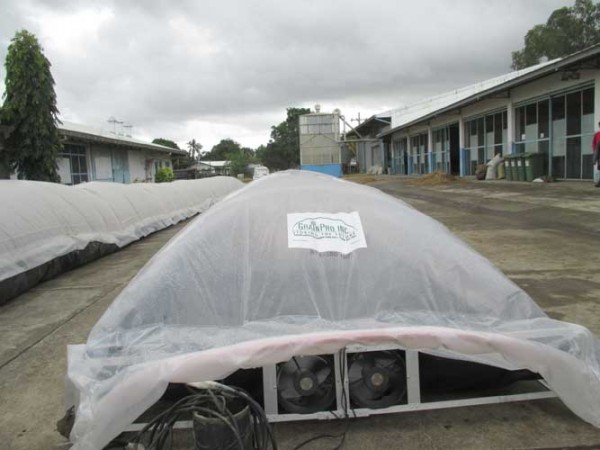 The air pressure from the ventilators holds up the polyethylene plastic sheet over the rice grains. (Photo: Ana Salvatierra)

In typical Philippine villages, rice grains spread out on open basketball courts or even on roads to sun-dry were a familiar scene for Ana Salvatierra, an agricultural engineer and researcher from the University of Hohenheim (UHOH) in Germany.

Sun drying is the most common drying method in the country, and also in Thailand, Cambodia, Laos, and India, among other tropical countries, because it is cheap. It uses the sun as the heat source. But, it is laborious and unreliable. Farmers need to mix the grains at least every half hour for even drying. They need to cover the grains when the sun is too hot to minimize cracking from overheating and constantly keep animals away from the grains. Obviously, overcast skies extend the drying period. And, when it rains, farmers hurriedly collect the grains to avoid getting them wet.

Engr. Salvatierra believed that the constant threat of rain made the traditional practice of sun-drying grains a terrible waste of farmers’ hard work.

Certainly, the quality of the grains decreases and postharvest losses could increase around 20% or even more,” Engr. Salvatierra laments.

Building bubbles
Meanwhile, Tom de Bruin, president of GrainPro Inc., a long-time collaborator with the International Rice Research Institute (IRRI) and manufacturer of IRRI Super Bags, was searching for other ways to use the sturdy polyethylene plastic material of the Super Bags.

Martin Gummert, head of the IRRI Postharvest Unit, supported the idea of repurposing the plastic to build dryers for rice grains. Engr. Gummert and GrainPro sought the technical expertise of researchers from UHOH in solar drying. The project, Development and optimization of a solar greenhouse dryer for drying rice, was funded by the Federal Ministry for Economic Cooperation and Development (BMZ), German International Cooperation (GIZ). Engr. Salvatierra became the lead project researcher. With IRRI as coordinator, UHOH, GrainPro, and local country partners were able to work together and accumulate knowledge for the project.

Field testing for a 1-ton-capacity dryer started during the dry season in 2011. The dryer design underwent many changes throughout its testing phase in the Philippines. The first prototype had a chimney and steel pipes that held up the plastic sheet roof over the rice grains. Technicians who set up the dryer found it difficult to pull the plastic sheet over the steel pipes. The chimney was not very efficient in drawing air through the drying tunnel and it also toppled due to strong rains and wind.

“We recorded our observations and collected data,” says Engr. Salvatierra. “Then, we modified the design of the solar bubble dryer based on the results from our field tests.”

Then the idea for a simple design came in 2012. It is made of two plastic sheets, a black one at the bottom where the grains are placed and a transparent one as roofing. Both sheets are connected by a zipper. It’s called the solar bubble dryer (or SBD)—“solar” because of the ambient temperature that provided heat from the sun for the dryer, and “bubble” because of the dome-like shape of the polyethylene plastic roof when set up.

The solar bubble dryer was evaluated for drying efficiency and grain quality.

Domes of heat
The current design now has two ventilators, in lieu of the steel pipes, placed at the air inlet at one end of the dryer to inflate and hold up the polyethylene plastic sheet, thus providing the dome shape. “The volume and air pressure are calculated so the dryer won’t collapse—even if it rains,” explains Engr. Salvatierra.

The ventilators also move the air inside the dryer, ensuring a homogenous distribution of heat and reducing the moisture content. The drying air leaves the dryer at the other end through an adjustable outlet.

Computer software from UHOH was also used to simulate the airflow inside the dryer to study the dryer’s performance and to further optimize its design, to help overcome budget and weather restrictions.

On a typical sunny day, the surface of the grains heats up so much that users need to increase the frequency of mixing the grains. One of the features of the solar bubble design is a rolling bar underneath the dryer for mixing the grains. It takes only two persons to pull the handles of the bar and roll it down the whole length of the contraption to mix the grains inside. The roller has an additional gadget attached to it that enables it to mix grains more efficiently and evenly.

This low-maintenance, environment-friendly, hassle-free, and portable dryer also uses materials that are locally available, making it economical to build. Introducing a low-cost drying solution into the market is an important aspect that could encourage intended users— small farmers, in this case—to adopt the technology, according to Engr. Salvatierra.

Engr. Gummert believes that after many attempts with more complex designs a low-cost dryer for farmers might now become a reality. Yet, even at this stage, because of the positive feedback from the 1-ton capacity solar bubble dryer, some private millers from other countries have requested units that can accommodate 4 to 5 tons of grain.

Fast experiments
“The development of the solar bubble dryer was fast because of IRRI’s partnership with a private company,” says Engr. Salvatierra. “GrainPro was willing to invest in a product they believed would further help small farmers.”

Engr. Salvatierra welcomes the challenge of conducting “fast experiments” under different environmental conditions as the second phase of the project is underway. She says that more tests will take place in other regions of the Philippines. IRRI’s partners in other countries (Myanmar, Vietnam, and Cambodia) are also being tapped to test the dryer, whereas GrainPro’s partners are testing the solar bubble dryer for commodities such as coffee and maize.

The research team has also looked into using solar panels to provide power to the battery of the ventilators. This enables operation of the dryer in areas where no electricity is available. Typically, a well-loaded battery can run up to 48 hours when charged by solar power, enough to cover a drying time of 2–3 days under rainy conditions, when traditional sun drying is not an option. When not used for drying, the solar panels can be used to produce electricity for other purposes, an additional feature for villages without a grid connection.

“It is a matter of adapting different engineering techniques in technology,” Engr. Salvatierra says. And technology, such as the solar bubble dryer, was adapted to the needs of the farmers—come rain or shine.
____________________
Ms. Rona Niña Mae Rojas-Azucena is a communication specialist at IRRI.