How will we create a better life and a better future for rice? How can we do much more, with less? 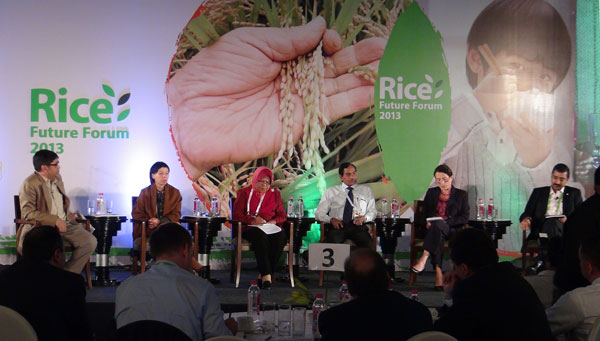 How will we create a better life and a better future for rice? How can we do much more, with less? These were the questions posed by Tobias Marchand, head of the Asia Pacific region, Bayer CropScience, to 200 rice experts and policymakers during the Rice Future Forum on 8-9 October in New Delhi, India.

These questions are not rhetorical but practical. Mr. Marchand and the forum participants agree on the issues surrounding the rice industry. Increasing global population, rising demand for rice production, malnutrition and poverty, threats of climate change, limited resources (farm land, water, and labor), and gaps in technology were the nagging issues that reverberated during the forum. And it was said that “understanding the problem is half the solution.”

India Agriculture Commissioner J.S. Sandhu acknowledged the role of the development of agricultural technologies for improving the grain industry. For the last 60 years, India’s food grain production has increased from 50 million tons in 1947 to 250 million tons in 2012-13— which made India an exporter of food grains, including rice. He attributed the increase in grain production, particularly in the 1970s, to high-yielding varieties developed during the Green Revolution, and the recent advances in research and development in agriculture.

For B.C. Viraktamath, project director, Directorate of Rice Research of the Indian Council of Agricultural Research (ICAR), “Increasing productivity through partnerships in R&D is the way to go.” He cited many research programs and projects of ICAR in partnership with the International Rice Research Institute (IRRI), among other organizations. Examples of these projects are Stress-Tolerant Rice for Africa and South Asia (STRASA) and the Cereal Systems Initiative for South Asia (CSISA).

Hybrid rice, noted for helping increase production in China, is set to reach an average yield of 16 tons per hectare there. Other technologies such as those of stress-tolerant rice varieties help improve productivity in unfavorable conditions.

“Most rice farmers are poor,” Dr. Bouman pointed out. Even with a farm of 2 hectares and growing two crops a year, many farmers earn only US$1,200−2,000 per year. “Even if their productivity is doubled— increasing their annual income to $2,400−4,000—it is not sufficient to bring them out of poverty.”

He argued that it is not a question of whether rice farming is profitable or not. “Land consolidation is needed to increase the farm size of marginal farmers,” Dr. Bouman said. “The farm size of most farmers is too small for them to attain an income above the poverty line.”

Dr. Bouman, among other speakers, sees hope in mechanization for solving the problem of labor shortage because of the migration of farm workers to cities. Satoshi Ida, deputy general manager of R&D, Kubota Corporation, shared that they have been designing farm machines to solve the problem of insufficient labor in Asia. He reported that many Asian rice farmers have been using these machines, thus saving on labor cost and time.

Dr. J.K. Ladha, IRRI principal scientist, highlighted the challenges facing rice systems in Asia, which include shortages and untimely availability of water and labor. “Manual transplanting is highly labor intensive and requires 25–50 person-days per hectare.” He stressed that rice consumes about 50% of the total irrigation water in Asia and on average 2,500 liters of water are needed to grow a kilogram of rice.

Dr. Ladha recommended dry direct-seeding technology, with which the seed is manually broadcast onto the soil and then incorporated either by plowing or by harrowing while the soil is still dry. In this way, puddling and transplanting can be avoided.

He said that much progress has been made in perfecting this technology and in developing a package of practices. Aside from saving water and labor, this technology allows crop residue recycling (otherwise residue is burned), reduces methane emissions, lowers energy use, and increases farmers’ profit. He added, “Avoiding puddling improves soil structure, which is needed for the succeeding crops such as wheat, maize, and vegetables.”

The importance of policies

In addition to technologies, policies have played a vital role in the direction of the rice industry across the globe. Dr. Trilochan Mohapatra, director of the Central Rice Research Institute in India, shared how policies helped increase rice production in the country. The policy of bringing the Green Revolution to eastern India allowed Odisha, which had the lowest average rice yield among the eastern states, to increase its average yield from 1.7 tons per hectare in 2007-08 to 2.3 tons in 2012. Dr. Mohapatra attributed this to large-scale demonstrations of technologies. Eventually, this jump in rice had a domino effect nationally. The country’s rice production rose to more than 104 million tons in 2012-13. From this, about 8 million tons of additional rice came from the eastern states.

Looking at the four or five decades after the Green Revolution, Sam Mohanty, head of IRRI’s Social Sciences Division, noted that government policies on rice have focused on reducing price risk and reducing the cost of inputs for farmers. Surprisingly, many riceimporting countries such as Malaysia and China have food security through self-sufficiency as a policy direction.

According to Dr. Mohanty, if every country wants to achieve food security through self-sufficiency, we might be in big trouble—globally speaking. “This will make the volume of the market smaller. If we have a bad year, the price of rice could skyrocket.” He added that there might be a need for a policy intervention at the global level, not just domestically.

This public-private partnership was better understood when speakers from private companies such as Kellogg, Bayer CropScience, and Tiga Pilar Sejahera Food shared concrete examples of how these companies work together with government institutions and with farmers across the rice value chain while mutually benefiting each other.

Lastly, Christel Weller-Molongua, division head, Rural Development Agriculture of the German International Cooperation (GIZ), reminded all participants that “as we find solutions to the challenges in the rice sector, let us not forget the importance of preserving biodiversity and environmental sustainability.”

Indeed, the forum, organized by Bayer CropScience in association with ICAR and IRRI, has stimulated fresh perspectives on topics that range from research and new innovations to government policies, collaboration among stakeholders, and sustainability across the rice value chain.

Ms. Lanie Reyes is the managing editor of Rice Today.