Under the “Mansholt Plan” for rice in Asia, governments are urged to expand farm size, promote mechanization, and improve yields and farm efficiencies to increase farmers’ income. 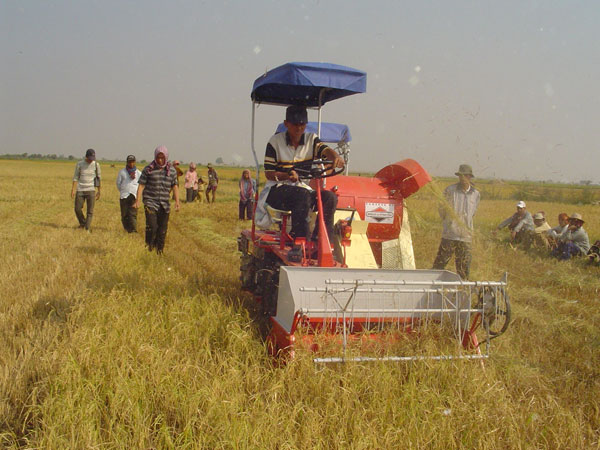 In 1968, Sicco Mansholt, the European commissioner for agriculture, sent a memorandum to the Council of Ministers of the European Community concerning agricultural reform. This plan became popularly known as the “Mansholt Plan.” The plan noted that, despite costly policies of price and market support, and despite increases in production, farmers’ standard of living was still way behind that of other sectors of society.

At that time, the average farm size in Europe was 11 hectares. Two-thirds of the farms were less than 10 hectares, though it was noted that, “with modern techniques, one man can cultivate 30 to 40 hectares of crop land.” Labor had steadily been migrating out of agriculture and “half of the persons who run a farm are more than 57 years of age.” There was a lot of concern about whether young people would still be willing to keep farming.

The plan also recognized some issues on the changing role of women: “Elsewhere, every effort has been made…to liberate women from the more onerous and unpleasant forms of work…yet the farmer’s wife finds more and more that she has to do a man’s full time job!”

Thus, Mr. Mansholt suggested that production methods change— they should be modernized, and small farms should increase in size. The latter was the cornerstone of his plan: “The new structure envisaged rests, essentially, on enterprises of adequate size.”

Between 1970 and 1980, the plan faced controversy because it encouraged nearly five million farmers to give up farming so that the remaining farmers could increase their farm size. However, the plan included a social component such as vocational training and welfare programs so that it would be easy for farmers to take up new jobs outside farming.

So, why dwell so much on this Mansholt Plan? Despite its being controversial and the differences in location and time, some conditions of rice farmers in Europe then and those in Asia today are strikingly similar.

In recent years, labor migration from rural to urban areas has accelerated tremendously in many parts of Asia. Usually, the able-bodied young men migrate while the women and the old stay behind. But, despite labor outmigration, farm size has been getting smaller and the number of farms is increasing.

So, just like Europe in the 1960s, we have to wonder about the future of rice farming in Asia. Since prospects of earning a decent income from rice farming are few, who will want to produce our rice tomorrow?

A proposal for modernization

So, maybe it’s time to develop a “Mansholt Plan” for Asia’s rice sector. The structural transformation we’re witnessing in Asia offers great opportunities for rice farming to be vibrant and profitable. Many examples of progress are already there, but these need further support.

Increasing farm size (consolidation) will have to be the cornerstone of any transformation. Even if yields increase dramatically, no one can obtain a decent livelihood from farming 1 to 2 hectares of rice area. However, many land markets in Asia are “locked,” so different options for putting more land into single management units (besides buying or renting) must be explored.

Some ways of increasing “virtual” farm size are already in progress. For example, China is experimenting with something called “village farming.” Vietnam is exploring a concept of individual farmers managing large tracts of land together in their “small farmers, large farm” program. Mechanized farm operations are increasingly outsourced so that large tracts of land can be run by contractors. In this way, economies of scale are realized.

The use of farm machines has to increase for higher labor efficiency, or at least make it on a par with the productivity in other sectors of the economy. In Asian rural areas, labor is becoming scarcer, which goes with having more costly labor. This makes investing in mechanization more attractive. Already, we see a rapid rise in mechanized transplanting, sowing, land leveling, and harvesting. Some new business models of the private sector facilitate the introduction and operation of farm machines.

Finally, yields and resource-use efficiencies simply have to go up. With resources (water, energy, and labor) becoming scarcer, it is paramount to produce “more with less.” Yields need to go up to meet the ever-rising demand for food without bringing new land into production. In addition, we need to come up with a more sustainable and environment-friendly way of growing rice.

Like the original Mansholt Plan, we need a social program to facilitate the transition. Smallholder farmers should find it easy to leave agriculture. Some investment should be made in vocational training for retooling those who want to leave farming, and in training on modern production technologies for those who want to stay. Also, we need to stimulate rural nonfarm enterprises so that farmers and agricultural laborers can stay in rural areas and not need to migrate to the already overcrowded cities.

Dr. Bas Bouman is the director of the Global Rice Science Partnership (GRiSP), the CGIAR Program on Rice.