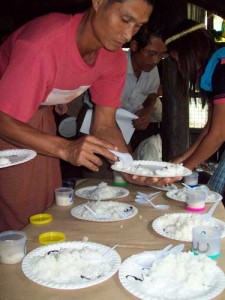 Soe Moe Kyaw’s family was fishing in a different village when Cyclone Nargis devastated their township in 2008. The result was grim. He lost his wife and child, and several of his relatives. After this tragic loss, the remaining members of his family abandoned fishing and turned to rice farming, vowing to always be close to their homes and loved ones in case another catastrophe strikes.

However, their village in Labutta Township is near the Ayeyarwaddy River. During the summer, the water of the river is so low that waters from the sea intrude into the river and the water becomes brackish and unsuitable for growing crops. Rice crops in the village could never survive during the summer. Mr. Kyaw and other farmers in some villages in the lower Ayeyarwaddy Delta can plant only one rice crop a year because of the high salt content in the soil. To make matters worse, the traditional rice varieties they cultivate not only produce low yields but also take longer before they can be harvested. As a result of these conditions, farmers usually harvest an average of only 2.8 tons per hectare, compared with the 4.2 tons per hectare in more favorable areas.

Taking charge of their lives

Replacing the rice varieties they plant is one solution available to Mr. Kyaw and his fellow farmers. But, in the past, the choices were usually limited to a few varieties that were introduced each year by seed companies and government agencies. Most of these were developed through conventional breeding programs and tested at research stations, which do not represent farmers’ fields. Although varietal release systems prioritize some traits, farmers often look for other traits when choosing varieties.

The International Rice Research Institute (IRRI) has been working with Myanmar’s Department of Agricultural Research (DAR), Department of Agriculture, and non-government organizations led by Welthungerhilfe, Mercy Corps, and GRET to provide new options for rice production along the coastal areas of the Ayeyarwaddy Delta. Funded by the United Nations Office for Project Services, the Livelihood and Food Security Trust Fund Project aims to improve food security and livelihoods of rice-producing households, particularly in Labutta, Bogale, and Mawlamyinegyun townships.

“Grain yield is not the only criterion for selecting rice varieties; we also consider other factors such as the results of grain quality preference analysis and sensory evaluation of PVS,” explains Dr. Glenn Gregorio, deputy head of IRRI’s Plant Breeding, Genetics, and Biotechnology Division.

Fifteen flood-prone and 12 salt-tolerant high-yielding rice varieties, as well as those that yield well in favorable conditions, were evaluated in researcher-managed fields and compared with the farmers’ variety at six sites during the 2012 wet season, and at 15 sites during the 2013 dry season. A total of 181 farmers joined the PVS preference analysis training in the 2012 wet season. And, in the 2013 dry season, 134 farmers joined a similar activity.

The eating and cooking qualities of the four or five most preferred varieties selected from field performance were then sensory evaluated by 126 farmers in the 2012 wet season and by 123 farmers in the 2013 dry season. Notably, a quarter to more than half of the farmers who participated in each of these activities were women.

“PVS is useful for us because we can now change our old traditional varieties for new ones that are higher-yielding or resistant to pests and diseases and tolerant of stress,” says Soe Oo, a 51-year-old farmer from Min Kone Village.

“At five of the six sites during the 2012 wet season, Saltol Sin Thwe Latt was the consistent choice of farmers because of its good taste, color, gloss, softness, and cohesiveness,” explains Romeo Labios, IRRI’s PVS consultant in Myanmar. “At all sites, Saltol Sin Thwe Latt and Swe Ta Soke had the highest average yield—3.9 tons per hectare.”

“The seeds of these varieties are being multiplied at DAR in Yezin for the large-scale farmer-managed trials in the 2013-14 dry season,” says Dr. R.K. Singh, IRRI’s senior scientist who is leading the varietal improvement program in Myanmar. “Farmers will receive 5 to 10 kilograms of seeds from three selected new varieties to be planted in larger plots in their fields. To sustain the availability of good-quality seeds in the community, selected farmers will produce seeds on their farms with technical guidance from our project staff.“

Women farmers from Labutta Township in Myanmar evaluate and select their most preferred varieties.

Aside from discovering new varieties, the farmers also learned better practices for growing their crop, such as direct seeding, proper fertilizer, and weed and herbicide management, through PVS trials. This new knowledge brings changes in old traditions and farmer practices in rice cultivation.

“I learned how to grow salt-tolerant varieties,” says Mr. Kyaw. “For our crops to avoid the harsh salt waters in March and April, we need to plant in December instead of January—one month earlier. If our plot is successful, it will be good for the whole region.”

“This will ensure that their preferred salt-tolerant varieties will be harvested before the salinity of the river becomes too high,” explains Madonna Casimero, IRRI’s representative to Myanmar. She and Dr. Labios believe that adjusting the cropping calendar will allow farmers to plant another crop, one that is more suitable than rice during the dry season. This will help them earn more income.

The benefits of PVS trials have spread to neighboring villages and improved the food security and livelihood of farmers through higher-yielding and stress-tolerant rice varieties of their choice. Best of all, Mr. Kyaw and many other farmers who used to struggle with making ends meet no longer have to leave their loved ones behind in search of a better life.